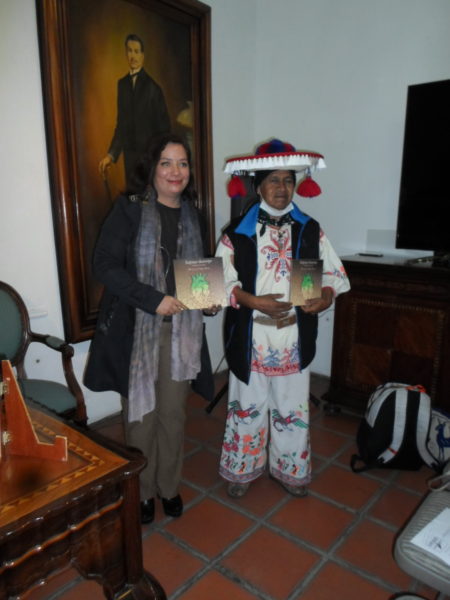 Bilingual edition that pays tribute to the Wixárica community.

The presentation was directed by Octavio César Mendoza Gómez Director of Publications and Literature of the Ministry of Culture of the Government of the State of San Luis Potosí.

In addition, there were Jesús Minjares Robles Wixárica translator of the work and Mtra. Miriam F. Perales in the comments.

Íntimo Desierto was presented with a reading in two voices, by the author Renatta Torres and Jesús Minjares, his Wixárica translator.

The poet said that “this book represents a lot personally and also does it with great affection as a tribute to the Wixárica community.”

This work has been published by Editorial Ponciano Arriaga and with federal support from the General Directorate of Cultural Linkage and the Cultural Support Program, in its area of ​​Support to State Institutions of Culture, of the federal Ministry of Culture.

This collection of poems written in free verse in Spanish of 105 pages printed in the Roland Impresiones workshops in San Luis Potosí, has a print run of 500 copies.

With front and back cover in color with an illustration of a heart designed by Luis Boix and design and editing by Beatriz Gaytán. It is structured in 49 poems, includes a prologue by Mtro. Alfonso Badillo Dimas (RIP), poet from Potosí who died last 2020, whose text was read by Mtra. Miriam F. Perales as a tribute.

Badillo Dimas expressed about the author of Íntimo Desierto: “She weaves images and travels through the air like an eagle that from the blue sky is a mountain woman, a stone woman discovering the family of the hikuri of five and eight segments.”

On the other hand, Perales commented on the work: “The poet is a reflection of his circumstance, time and space. From this idea it is possible to think of the relationship between Renatta Torres Nava and his poetic self as a creative and mystical act.

His wanderings along the sacred roads of Cerro del Quemado, through the streets sometimes mobs, other ghosts, of a place called Real de Catorce, the dawns shared alongside its inhabitants, legends and silences have nurtured the poetry of Íntimo Desierto. “

He added: “Renatta Torres Nava makes us participate in a rite of communion with the word and the Huichol or Wixárica tradition from the voice of a mountain woman. The poems in this work constitute a journey through the Intimate desert and invites us to that unpostponable journey with the lucidity of our ephemeral passage through the universe.

To get closer to the work I recall a phrase by Joseph Campbell: «The hero’s adventure represents the moment in his life when he reaches enlightenment, the nuclear moment when, still alive, he finds and opens the path of light above the dark walls of our death in life “” This sentence opens a possibility of reading this work, it is certainly only a glance, of many other possible ones “.”

Later, Mtra. Miriam F. Perales: ”This journey could be a pilgrimage to Cerro del Quemado in Real de Catorce, a land of Wixárica but it has a personal imprint, in which the traditional and natural elements of this magical and ancestral territory of the Wixárica people coexist: sky, earth, fire, sun, along with its original inhabitants: Hikuri, peyote, deer and of course the shaman or Maracame; But this Intimate Desert is an intimate universe to which elements from other traditions such as Christianity are added, where it refers mainly to God, angels and serpents.

Perales concluded “that the contribution of this collection of poems contributes mainly to the diffusion of the Huichol or Wixárica language, to the appreciation of the rites and symbols of this culture and to the aesthetic experience, but it does not remain only in literary forms, it goes beyond that. bet on the transcendence of our being as part of a universe, or as Octavio Paz would say “it is a way of access to pure time, immersion in the original waters of existence”.