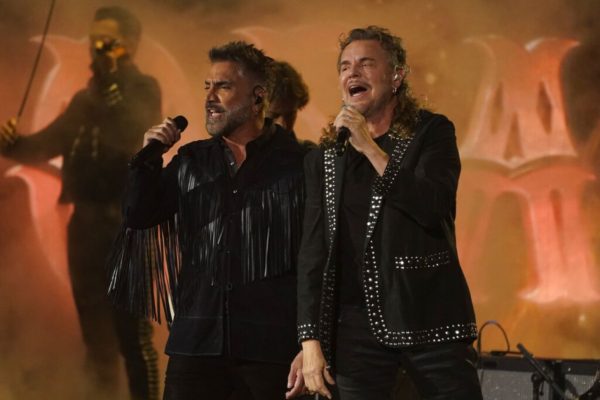 The Mexican band recorded with Alejandro Fernández a new version of their song Mariposa traicionera, which is part of an album of duets that they are preparing for the following year. It also lists new material with unreleased tracks.

Almost 20 years ago, the song Mariposa treacherous, by the Maná group, resonated on their sixth studio album Revolución de amor. Today nostalgia moved the group from Guadalajara to revert it with the fusion of two styles: theirs and that of their countryman Alejandro Fernández.

“Mariposa treacherous has been iconic and is a theme played by trios, mariachis, bands. Alejandro Fernández is from Guadalajara, so Sergio Vallín thought about some Mexican arrangements, but keeping the essence of Maná, and it sounds delicious.

“It’s a song that women like a lot. Curiously, they sing it with a lot of pride and spite, as if saying: ‘Now, you bastard! ”, Expressed Fher Olvera, Maná’s vocalist, in an interview with an international news outlet.

The song was premiered at the Latin Grammy Awards. “It was a very energetic night, of great emotion to be on the stage again with our great friend Alejandro Fernández.

“We are already seeing light at the end of the tunnel. It’s good that people are starting to jam again, ”said Alex González, the band’s drummer.

Guitarist Sergio Vallín stressed that the video for Mariposa traicionera is very casual, they share some tequilas with El Potrillo.

“We did it in Tlaquepaque, one of the most iconic places in Jalisco, as well as the bar where we did it. The interpretation of the mariachi gives a very special flavor to the music, very Mexican. We had a great time with Alejandro, ”said Vallín.

Infidelity, which addresses Treacherous Butterfly, gives continuity to other collaborations such as Rayando el Sol, with Pablo Alboran; It has not stopped raining, with Sebastián Yatra, and You are my religion, with Joy Huerta.

“We have done other duets lately, one of them with Mabel, a young Mexican who accompanied us in El Reloj Cucú.

We will collect them and put them out on disk. We will do more, the idea is that those songs that came out more than 20 years ago, we will revisit them with artists from now, but taking care that they are of quality.