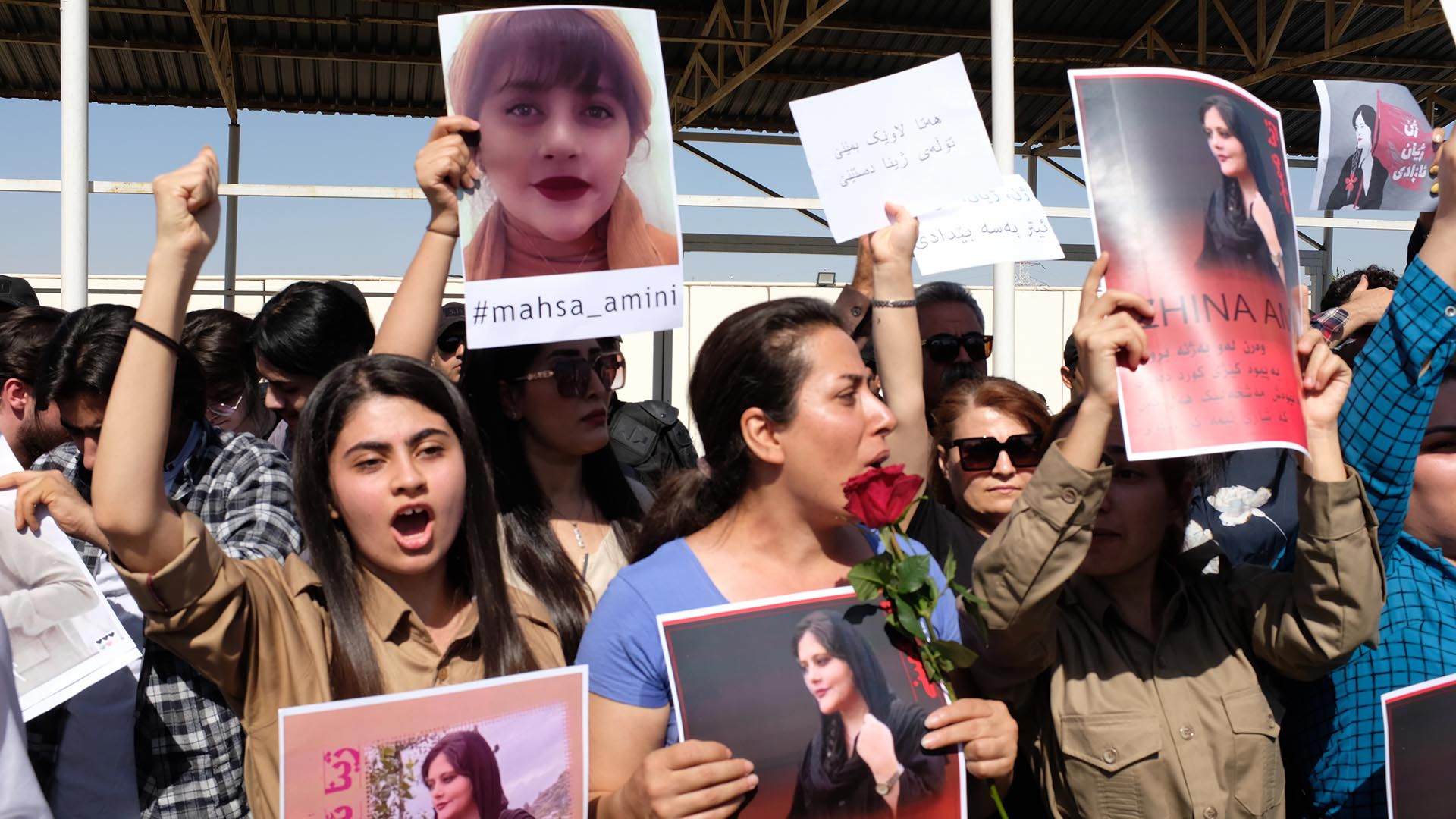 Growing up under a repressive system, Sharo, a 35-year-old college graduate, never thought she would hear words of open rebellion spoken out loud. Now she herself sings slogans like “Death to the dictator!” with a fury he didn’t know he had, as he joins the protests calling for the overthrow of the country’s rulers.

Sharo said that after three weeks of protests, triggered by the death of a young woman in the custody of the feared morality police, anger against the authorities is only growing, despite a bloody crackdown that has left dozens dead and hundreds detained. .

“The situation here is tense and volatile,” he said, referring to the city of Sanandaj, in the Kurdish-majority district of the same name in northwestern Iran, one of the hot spots of the protests.

“We are just waiting for something to happen, like a ticking time bomb,” he said, speaking to The Associated Press via the Telegram messaging service.

The anti-government protests in Sanandaj, 300 miles (500 kilometers) from the capital, are a microcosm of the leaderless protests that have rocked Iran.

Led largely by women and youth, they have evolved from spontaneous mass gatherings in central areas to scattered demonstrations in residential areas, schools and universities as activists try to evade an increasingly brutal crackdown.

Tensions rose again in Sanandaj on Saturday after human rights monitors said two protesters were shot dead and several wounded, following a resumption of demonstrations. Residents said there has been a heavy security presence in the city, with constant patrols and security personnel stationed on main streets.

The Associated Press spoke with six activists in Sanandaj who said that repressive tactics, including beatings, arrests, the use of live ammunition and internet disruptions, sometimes make it difficult to maintain momentum. Yet the protests persist, along with other expressions of civil disobedience, such as business strikes and drivers honking horns at security forces.

The activists in the city spoke on the condition that their full names be withheld for fear of retaliation by Iranian authorities. Their accounts were corroborated by three human rights observers.

Three weeks ago, news of the death of 22-year-old Mahsa Amini in the custody of the morality police in Tehran spread rapidly through her home province of Kurdistan, of which Sanandaj is the capital. The response was swift in the impoverished and historically marginalized area.

As the burial was underway in the city of Saqqez, in Amini, on September 17, protesters were already filling the main thoroughfare of Sanandaj, activists said.

People of all ages were present and began chanting slogans that would be repeated in cities across Iran: “Woman. Life. Freedom”.

The Amini family had been under pressure from the government to bury Mahsa quickly before a critical mass of protesters formed, said Afsanah, a 38-year-old clothing designer from Saqqez. She was at the funeral that day and followed the crowd from the cemetery to the town square.

Rozan, a 32-year-old housewife, did not know Amini personally. But when she learned that the young woman had died in the custody of the morality police in Tehran and had been arrested for violating the Islamic Republic’s hijab rules, she felt compelled to take to the streets that day.

“Same thing happened to me”, said. In 2013, like Amini, she had ventured to the capital with a friend when she was detained by morality police because her abaya, or loose robe that is part of the mandatory dress code, was too short. She was taken to the same facility where Amini later died, and was fingerprinted and made to sign a guilty plea.

In the years since then, Rozan, a former nurse, was Fired from the local government health department for expressing too much of her views on women’s rights.

After the funeral, he saw an old woman step forward and, with a quick gesture, remove her headscarf. “I felt inspired to do the same”said.

In the first three days after the burial, protesters were removed from the protests in arrest raids in Sanandaj. By the end of the week, the arrests targeted well-known activists and protest organizers.

Dunya, a lawyer, said she was part of a small group of women’s rights activists who helped organize protests. They also asked the merchants to respect a call for a commercial strike in the main streets of the city.

“Almost all the women in our group are in jail now”said.

Internet blackouts made it difficult for protesters to communicate with each other across cities and with the outside world.

“We would wake up in the morning and have no idea what was going on,” said Sharo, the college graduate. The internet came back on and off, often late at night or during work hours, but quickly went out in the late afternoon, the time when many gathered to protest.

“There are patrols on almost every street, and they break up groups, even if it’s just two or three people walking down the street,” Sharo said.

During the demonstrations, security forces fired buckshot and tear gas into the crowd, causing many to run. Security personnel on motorcycles also drove into the crowds in an effort to disperse them.

All of the activists interviewed said they witnessed or heard live ammunition. Iranian authorities have so far denied this, blaming separatist groups on occasions where live fire was verified. The two protesters killed in Sanandaj on Saturday were killed by live fire, according to the France-based Kurdistan human rights network.

The protesters say that fear is a close companion. The injured were often reluctant to use ambulances or go to hospitals, worried they might be arrested. Activists also suspected that government informants were trying to blend in with the crowds.

But acts of resistance have continued.

“I assure you that the protests are not over,” Sharo said. “People are angry, they are talking to the police in ways that I have never seen.”

The anger is deep. In Sanandaj, the confluence of three factors has made the city a fertile ground for protest activity: a history of Kurdish resistance, rising poverty, and a long history of women’s rights activism.

However, the protests are not defined along ethnic or regional lines, even though they were sparked in a predominantly Kurdish area, said Tara Sepehri Fars, a researcher at Human Rights Watch. “It’s been very unique in that regard,” she said.

There have been waves of protests in Iran in recent years, the largest in 2009 which drew large crowds into the streets after what protesters felt was a stolen election. But the continued defiance and demands for regime change during the current wave seem to pose the most serious challenge for the Islamic Republic in years.

Like most of Iran, Sanandaj has suffered as US sanctions and the coronavirus pandemic devastated the economy and spurred inflation. Far from the capital, on the fringes of the country, its Kurdish residents are viewed with suspicion by the regime.

In the third week, with the opening of universities and schools, students began holding small demonstrations and joined the movement.

Videos circulated on social media showing students mocking school teachers, school girls removing their headscarves in the street and chanting: “One by one they will kill us, if we don’t stick together.”

A college student said they planned to boycott classes entirely.

Afsanah, the clothing designer, said she likes to wear the headscarf. “But I am protesting because it was never my choice.”

Her parents, fearing for her safety, tried to persuade her to stay home. But she disobeyed them, pretending to go to work in the morning only to look for protest meetings throughout the city.

“I am angry and without fear, we just need this feeling to spill over into the street”said.

The moment when Iranian television was hacked while broadcasting a speech by the regime’s supreme leader, Ayatollah Ali Khamenei

Teenage girls take up the torch of protest in Iran: can they go further than their mothers?