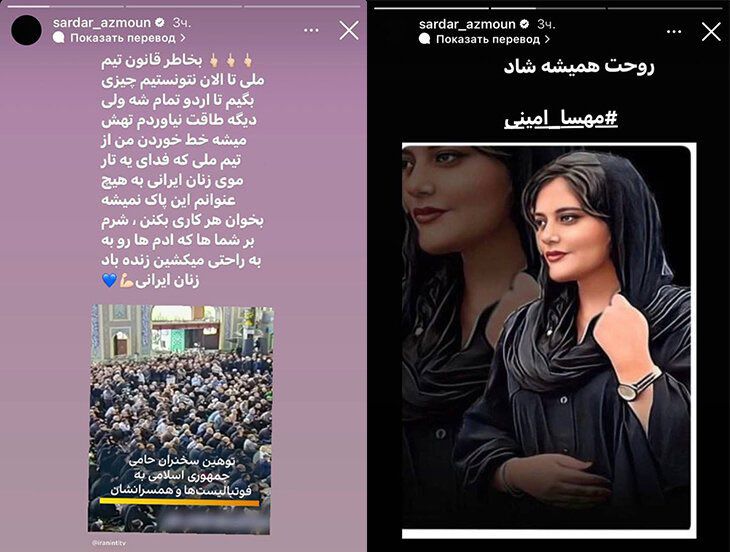 Less than two months before the start of the Qatar World Cup The soccer players of the Iran team are affected by the situation that their country is going through, convulsed by the protests that repudiate the death of Mahsa Amini, the 22-year-old woman arrested and killed by the morality police. Referents of the national team made their rejection public and before playing their last friendly match in which they drew 1-1 against Senegalthey had an attitude that went viral.

In the run-up to the match played this Tuesday in Vienna, Austria, at the time of the hymns, the Iranians dressed in black jackets and covered the logo of their country’s regime. In the adjacencies of the enclosure there were also demonstrations against. “We are here to beg (the team): please support us instead of being against us,” said Mehran Mostaed, one of the organizers of the protest.

As reported Guardianthe match was played behind closed doors by edict of the Iranian football association, which held the rights to the match, but this made it easier for the protesters to make themselves heard on television broadcasts.

what happened with Amini generated a social explosion in a country influenced by football and that in Qatar will have another participation. His team is in Group B along with United States, England and Wales. The goal of those led by the Portuguese Carlos Queiroz is getting out of the group stage for the first time.

In the last days the attacker sardar azmounstar of his national team and player of Bayer Leverkusen in the Bundesliga, was in the eye of Iranian netizens, who released screenshots of an Instagram post by Azmoun saying that, due to “restrictive rules (…) I could not say anything”.

“In the worst case, I will be fired from the national team”, Azmoun wrote on Sunday. “No problem. He would sacrifice that for a hair on the head of Iranian women. This story will not be deleted. They can do what they want. You are ashamed to kill so easily; long live iranian women”, was his post that was deleted along with all the content of your account Instagram, followed by about five million people, who disappeared for days. “This will never be erased from our consciences! Shame on you!” she wrote.

However, after the match against Senegal, Azmoun’s official account came back online and apologized for his previous post. “I was not under pressure to write or to delete the Instagram story”he said, adding that “there is no division in the team”.

Azmoun started the match off the bench, fueling rumors that he could have been left out. However, he came on in the second half and scored a goal with a perfect header.

Meanwhile, one of the most important players in the history of Iranian football, the now-retired ali karimi, became a hero to many of the protesters in Iran, emphatically supporting the protests. He repeatedly posted on Instagram Y Twitter his support for the claims, saying that not even holy water could “cleanse this disgrace.” He added that, “Like the common people of my land, I am not looking for a position or position. I only look for the peace, comfort and well-being of the people”.

These publications led the Iranian news agency Fars to publish an article calling for his arrest, while it has been suggested that his property in Iran could be seized.

While the defender majid hosseini published this Wednesday in his account Instagram a drawing with a woman with long hair blowing in the wind, taking off a riot policeman’s helmet. “Look, I’m your countryman”, says the woman. “Drop your weapon,” he repeats to the man three times according to the text in Persian that accompanies the image. If God gave life, why should you take it away? ”Continues the woman, according to the message shared by the Turkish Kayserispor player, who has more than 400 thousand followers.

These expressions were added to those of Mehdi Mahdavikia, who played for four years in the German Bundesliga, who accused the authorities of “ignore people” while ali daeilegendary striker and star at the 1998 World Cup in France, said the regime would have to “solve the problems of the Iranians instead of using repression, violence and arrests.”

The demonstrations that have shaken Iran since September 16 were for the death of Mahsa Aminithree days after his arrest in Tehran for not respecting the dress code.

According to the last balance of this Tuesday released by Fars, “about 60 people have been killed”. On the other hand, the Oslo-based NGO Iran Human Rights (IHR) estimates the figure at “at least 76 dead”.

The confession that complicates Diallo in the PSG scandal: “Hamraoui had to be hurt so he couldn’t play”

A Brazilian soccer player targeted a journalist who published a video of his partner, Alisha Lehmann: “You have no respect”