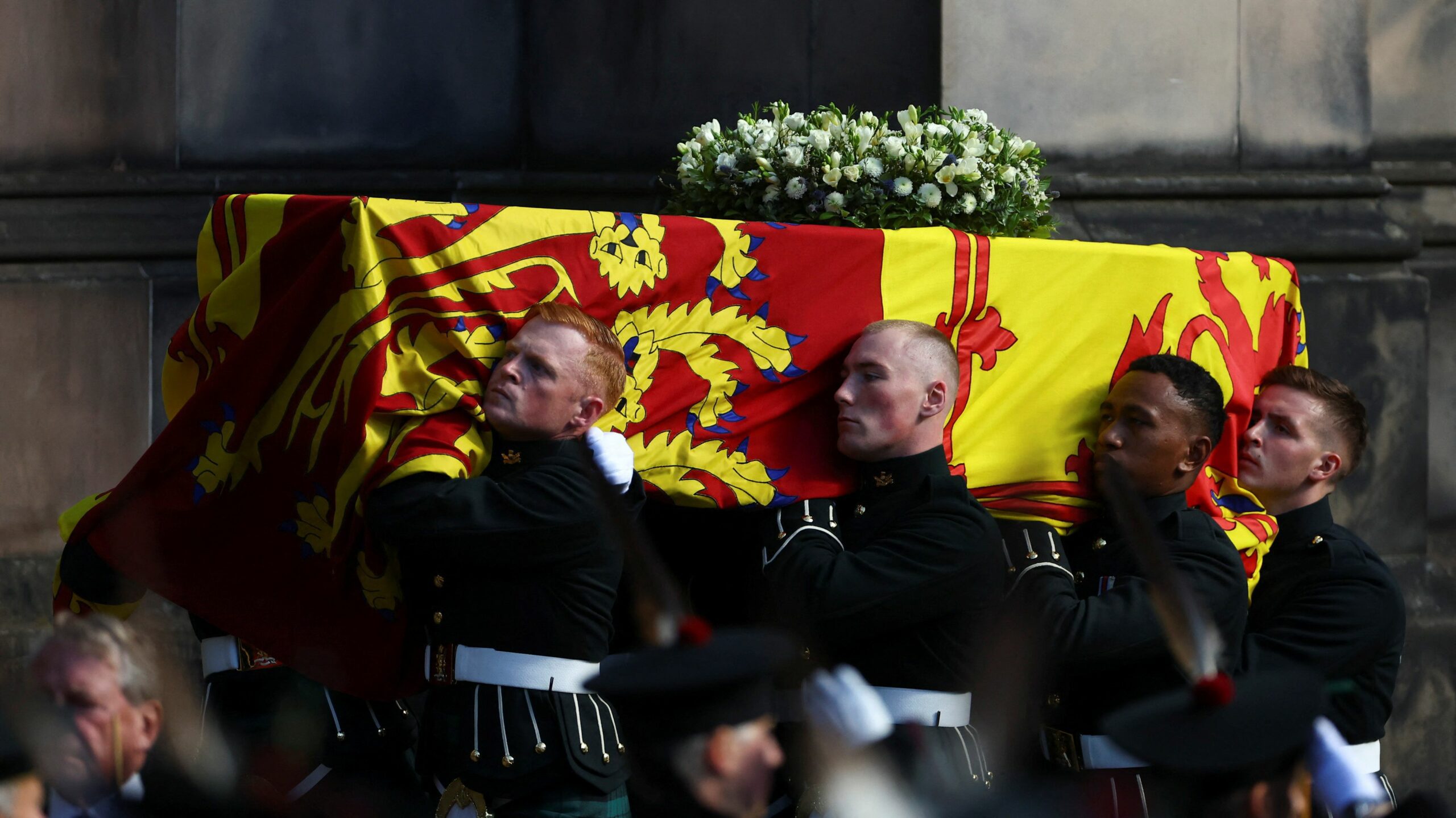 the new king Carlos III led the procession that moved the mortal remains of Elizabeth II from the Palace of Holyroodhouse to Saint Giles Cathedral, where a religious service was held.

Neither William, the new Prince of Wales, nor Harry, the Duke of Essex, participated in the transfer of the coffin. Instead, he was accompanied by his brothers.

Ana, 72 years old, and Eduardo, 58 years old, also wore a military uniform, like Carlos. But not so Andrés, 62, considered Elizabeth II’s “favorite son” but whom the monarch herself stripped of her military honors months ago following accusations of sexual assault on a minor in the United States, which were closed with an out-of-court settlement. During the procession, a young man was arrested for shouting against the controversial prince.

The queen’s coffin, draped with the royal standard of Scotland and a wreath, was advanced flanked by Scottish Regimental Guards to the cathedral, where the Crown of Scotland was placed upon it.

On both sides of the Royal Mile avenue, where the procession passed, thousands of people attended, who from very early took their places behind the barriers erected by the police.

Earlier, together with the queen consort Camila, the king received condolences from the presidents of the House of Commons and the House of Lords, in London.

The monarch is scheduled to meet with the Scottish prime minister, the independentist Nicola Sturgeon, and will seek the condolences of the regional parliamentbefore attending a royal family wake during the night.

After a religious ceremony at Saint Giles Cathedral, on whose roof police snipers had been stationed, the first burning chapel will open there towards the end of the afternoon, which will allow the Scots to say goodbye to their monarch for 24 hours.

“It is a great event, His Majesty did very good things in his long life. It will be good to know in a few years that we participate in this part of history, we will always tell our children that we attend,” MJ Alrubaiee, a 31-year-old doctoral student in engineering, who attended with his wife and two-year-old daughter, told AFP. .

As the last and long goodbye to the late monarch begins, the country continues with the installation protocol of the new king.

Following tradition, the king and his brothers are to take part in a vigil for the late queen, which will remain in Edinburgh Cathedral until Tuesday afternoon. On Tuesday, Charles and the Queen consort will leave Edinburgh for Belfast to meet Northern Ireland policymakers and receive condolences from the Speaker of the Northern Ireland Assembly.

The queen’s coffin will leave the cathedral in the afternoon for the airport for its transfer to London, along with her daughter, Princess Anne. Overnight, you will rest in the Bow Room at Buckingham Palace. Carlos III and members of the royal family will receive the coffin upon arrival.

Elizabeth II’s coffin, in front of which hundreds of thousands of people will parade to her funeral, is made of English oak and lined with lead and was manufactured more than 30 years ago, The Times newspaper explained on Monday.

The public will not be able to see the face of the queen, whose coffin will lie closed and covered with the royal banner and regalia.

(With information from Reuters, AFP)

Step by step, what the funeral of Queen Elizabeth II will be like