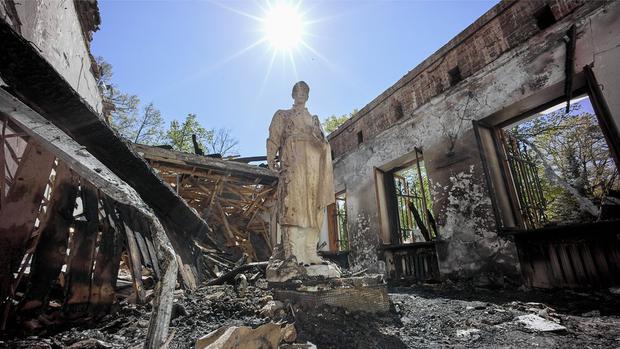 The statue of the poet Grigory Skovoroda was the only thing left standing from his house museum.

The first thing they attacked in the town of Ivankiv was the museum. It was the second day of the war. The bomb hit the modest building that housed part of the work of Maria Primachenko, one of Ukraine’s most beloved artists.

The neighbors did not hesitate. They tore down the bars of the Local History Museum and entered the inferno of the flames to save fifteen works of art full of fantastic animals inspired by local folklore. Not only was the legacy of one of the greatest representatives of naif art in the world in danger. From the fire they saved a symbol of Ukrainian identity.

It is not the only national emblem to have been targeted by Russian troops. In Borodianka, when Ukrainian soldiers retook the town in April, they found the bust of beloved nationalist poet Taras Sevchenko riddled with bullets. In Kharkiv, the house museum of the poet and philosopher Grigory Skovoroda, another great man from Ukraine, was also bombed.

Most of the pieces and files had been put to safe days before, but the building was destroyed. Only a sculpture of the poet was saved, which, white and still standing, turned into a symbol of resistance, seemed to want to defy the bombs.

The war in Ukraine is being waged on many fronts, including the cultural one. The bombs that have destroyed cities and killed thousands of people in Ukraine are also destroying the country’s historical and cultural heritage.

UNESCO speaks of at least 143 sites damaged or completely destroyed, a figure that the Ukrainian government raises to more than 380, including museums, libraries, churches and cultural institutions. Added to the physical damage is the looting of its museums.

The destruction is indiscriminate, but for some a certain pattern can be glimpsed among the chaos.

Russian President Vladimir Putin has made it clear on numerous occasions that he does not believe that Ukraine is a real state, or that its people, language or culture are real. It’s all part of Russia, he argues. Are those bombings and looting a way of trying to erase that Ukrainian national identity?

“There is several evidence that Russia has specifically targeted the Ukrainian identity,” Volodymyr Kulyk, professor of Political Culture and Ideology at the National Academy of Sciences of Ukraine, assures BBC Mundo.

The academic cites several examples: “In the city of Mariupol, just after it was taken over by Russian troops, they removed the Ukrainian from the road signs and left only the Russian. The same has happened in schools in the occupied territories, where Russian has been imposed as the language of instruction and libraries have been known to destroy books in Ukrainian, especially works on the history or language of the country.

It could be that the bombing of museums, churches or libraries is more a reflection of how indiscriminate the Russian attacks are being, Kulyk concedes. But the very concept of “denazification”, with which Vladimir Putin has justified the war from the beginning, “reveals his intentions to eliminate or undermine the Ukrainian identity”, argues the professor, who is also a research associate with the University of Ukraine. Harvard.

According to Kulyk, for the Russians, the “denazification” of Ukraine does not mean doing away with extreme right-wingers “but with everything that is not Russian.”

Not everything is being destroyed. There are pieces, thousands, according to different local sources, that are being transferred to the regions controlled by the invaders and from there, the Ukrainian Ministry of Culture suspects, to Russia.

In April, several soldiers, accompanied by an expert, went to the Melitopol museum, in the south of the country, in search of a very particular collection.

The Scythian gold hoard from the 4th century BC that housed the center had been hidden by its director, Leila Ibrahimova, in the basement at the outbreak of the conflict. Armed Russian troops showed up at her house and interrogated her for several hours to tell them where her pieces were, though she was eventually released and she managed to flee.

Another employee of the museum, Galina Kucher, did not suffer the same fate. The soldiers took her away at the end of April and the BBC does not know what has become of her since then.

The Scythians were a nomadic people who founded a prosperous empire centered on the Crimean peninsula between the 8th and 2nd centuries AD. It spread across much of Asia and into parts of what is now Russia and the Ukraine.

Putin’s fondness for Scythian gold, which is considered especially symbolic of Ukrainian identity and independence, goes back a long way. In 2014, when Russian troops invaded Crimea, several pieces of the treasure were on loan in Amsterdam for an exhibition.

Russia demanded that the gold be returned to the Crimean museums from which it had come, launching a legal battle that has lasted for years. A judge ruled in 2021, however, that the gold belongs to the Ukrainian state, not to museums on the peninsula, now controlled by Russia.

The pieces that were in Melitopol have not suffered the same fate. The soldiers and the expert ended up finding the boxes in the basement.

The same has happened in Mariupol. At least 2,000 art objects are believed to have left its museums for Donetsk, including a manuscript Torah scroll and a valuable Venetian gospel from 1811. Representatives of the Donetsk museum said the works were temporarily given to them, and which would be returned to the museums to which they belong if they so request.

“They already did it in Crimea and now they are doing it in Mariupol and other cities. What they want, they take with them,” says Russian political scientist Sergej Sumlenny.

Museums and other cultural venues in Ukraine, explains the expert on Eastern Europe, are being attacked “deliberately, it is not a coincidence, it is a fundamental part of Russia’s strategy to eliminate Ukrainian culture.

Do not weaken it, eye, eliminate it. And it is not new, they have been trying to do it for 300 years, from Pedro I to Catalina la Grande, all the emperors have had that objective”.

One of the proofs, Sumlenny maintains, is that one of the most illustrious sons of the city of Mariúpol has not been spared from the bombs.

The museum dedicated to the 19th-century painter Arjip Kuindzhi was bombed at the end of March.

Its director, Tatiana Buli, told the Russian service of the BBC how she herself, like Ibrahimova had done in Melitopol, hid some of the most important paintings in the basement in the first days of the war. Shortly after, she managed to flee from one of the cities that have been most intensely martyred by Russian artillery.

Putin’s troops, however, found the works thanks to the collaboration of the director of another local institution, who knew the exact place where they were hidden and handed them over to the Russians.

Among the paintings taken by the soldiers are Kuindzhi’s paintings “Red Sunset”, “Autumn” and “Elbrus”, all of them very valuable, as well as some by his teacher Ivan Aivazovsky.