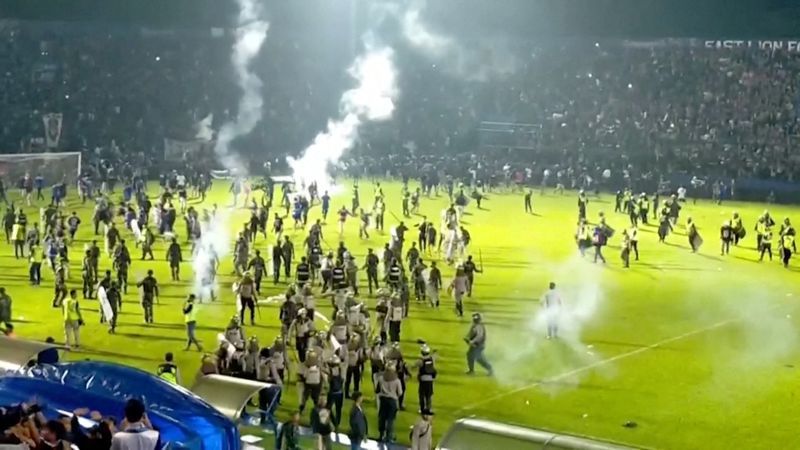 The death toll from the riots after a football match in Indonesia rose to 174 deceasedlocal authorities announced on Sunday.

“At 09:30 local time (02:30 GMT) the balance passed to 158 dead and at 10:30 it rose to 174 dead. These are the data collected by the East Java disaster management agency,” said the deputy governor of the province, Emil Dardak, to the television network. Kompas TV.

Among the victims are at least 17 children. The incident took place in the Javanese region of Malang, as a result of the riots in the Kanjuruhan stadium after a soccer match between the teams of the Arema FC and Persebaya Surabayawhen security forces responded to a field invasion with the use of tear gas that caused a huge human stampede in the stadium.

Thousands of followers of Arema F.C. They will jump onto the field of play after the 3-2 defeat in the classic East Jarva before him Persebaya Surabaya. After several unofficial versions, the Police confirmed that there are at least 174 dead, some of whom died on the field.

Chief Inspector General of the East Java Regional Police, Nico Afintawas the one who made the shocking figure public after several local portals had anticipated that it was a number of fatalities that could mark a turning point in the history of violence in soccer in that country.

The viralized images of what happened are dramatic. Several fans were able to film with their cell phones what the moment was like when a crowd jumped onto the field and started a confrontation cwith the police officers who responded by using tear gas on the green grass and in the stands. Meanwhile, soccer players, referees and coaching staff escaped to the changing rooms to avoid being attacked.

“We are concerned and deeply regret this incident. We share our condolences and hope that this will be a valuable lesson for all of us,” said Akhmad Hadian Lukita, president of Liga Indonesia Baru (LIB). Also, Arema FC has already been informed that it will not play again with the public or in its stadium for the remainder of the seasonwhile other measures are analyzed.

Among the injured are children and women who were taken to two hospitals in the area. In turn, the local news site Komas published that some of “the victims were the product of being trampled by other sympathizersas well as the difficulty in breathing due to the tear gas fired by the security forces”.

The level of violence was such that fights broke out in the stands, on the field of play and, when the stadium gates were opened, in the vicinity of the enclosure, where Police had to respond with greater force to the chaos. In addition, members of the Indonesian Armed Forces in order to restore peace, while the fire and gases became part of the violent landscape.

For its part, the club Perseberry posted on his Twitter account: “Persebaya’s extended family deeply regrets the loss of life after the Arema FC vs Persebaya match. No life alone is worth football. We pray for the victims and that the families left behind are given strength.”

With these terrifying figures, the tragedy is not only the largest in the history of Indonesia, but also the third in the world in number of fatalities linked to sporting events. The largest occurred in Peru in 1964 in a match against the Argentine national team who left more than 300 dead. Then the duel between Naples Y bologna tainted Italian football in 1944 causing the death of 152 people for a battle between the local fans and the police. With the figures revealed so far, this unfortunate event in the Asian country ranks third.

Horror in Indonesia: at least 129 deaths reported in a football match after a pitched battle

Strong position of the Indonesian Police after the tragedy: “If they had obeyed the rules, this would not have happened”