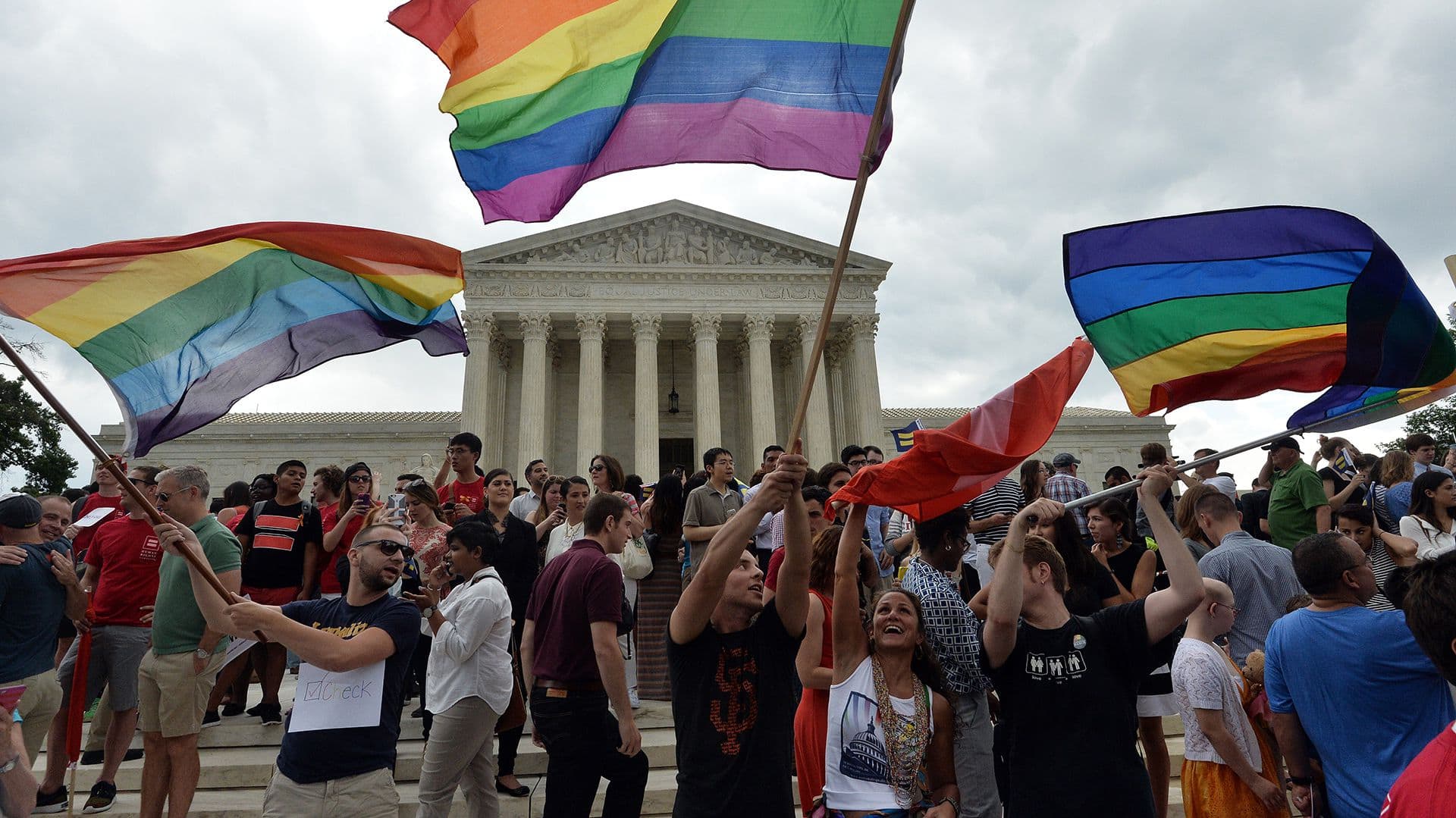 The bill to protect same-sex marriages passed the Senate on Tuesday and will be voted on next week in the House of Representatives, an extraordinary sign of the shift in national policy on the issue and a relief measure for the hundreds of thousands of couples who have married since the 2015 Supreme Court decision legalizing gay marriage nationwide.

The bill, which would ensure that same-sex and interracial marriages are enshrined in federal law, was approved Tuesday by 61 votes in favor and 36 against, including the support of 12 Republicans. Senate Majority Leader Chuck Schumer called the legislation “something that came a long way” and was part of America’s “difficult but inexorable march toward greater equality.”

House Speaker Nancy Pelosi said that the bill will be voted on next week and then sent to President Joe Biden for his signature.

Democrats are moving fast, while the party continues to have a majority in both houses of Congress. The legislation now goes to the House of Representatives for a final vote.

Biden praised the bipartisan vote and said he will sign the bill “with speed and pride” if it passes the House. She said it will ensure that LGBTQ youth “grow up knowing that they, too, can lead full and happy lives and build families of their own.”

The bill has gained steady momentum since the June Supreme Court decision that nullified the federal right to abortion, a ruling that included a concurring opinion from Justice Clarence Thomas suggesting that same-sex marriage could also be threatened. Bipartisan negotiations in the Senate got a boost this summer when 47 Republicans unexpectedly voted in favor of a House bill, giving supporters newfound optimism.

The legislation would not force any state to allow same-sex couples to marry. But it would require states to recognize all marriages that are legal where they took place, and protect current same-sex unions., should the court’s 2015 decision in Obergefell v. Hodges. This is stunning bipartisan endorsement, and proof of social change, after years of bitter division on the issue.

A new law protecting same-sex marriages would also be a big win for Democrats as they abandon their two years of entrenched power in Washington, and a big win for advocates who have been pushing decades for legislation. federal. It comes at a time when the LGBTQ community has faced violent attackssuch as last weekend’s shooting at a gay nightclub in Colorado, which killed five people and injured at least 17.

“Our community really needs a win, we’ve been through a lot,” said Kelley Robinson, the incoming president of the Human Rights Campaign, which advocates for LGBTQ issues. “As a queer person who is married, I feel a sense of relief right now. I know my family is safe.”

Robinson was in the Senate chamber for the vote with his wife, Becky, and their young son. “He was more emotional than he expected,” he said.

The vote was also personal for many senators. Wisconsin Democratic Sen. Tammy Baldwin, the bill’s first openly gay senator and main sponsor, tearfully hugged Schumer and the others as the final vote came. Baldwin, who has worked for gay rights for nearly four decades, tweeted her thanks to the same-sex and interracial couples who she said made the moment possible.

“By living as your true selves, you have changed the hearts and minds of the people around you,” he wrote.

Schumer said Tuesday that he was wearing the tie he wore at his daughter’s wedding, “one of the happiest moments of my life.” He also recalled the “heartbreaking conversation” he had with his daughter and his wife in September 2020 when they learned that liberal Justice Ruth Bader Ginsburg had died. “Could our right to marry be undone?” they wondered then.

With conservative Justice Amy Coney Barrett taking over for Ginsburg, the court has struck down Roe v. Wade and the federal right to abortion, stoking the fears about Obergefell and other rights protected by the court. But sentiment has changed when it comes to same-sex marriage, with more than two-thirds of the public in favour.

However, Schumer said it was remarkable that the Senate was even having the debate after years of Republican opposition. “A decade ago, it would have been hard to imagine both sides talking about protecting the rights of same-sex married couples.“, said.

The approval came after the Senate rejected three Republican amendments to protect the rights of religious institutions and others that continue to oppose these marriages. Supporters of the legislation argued that such amendments were unnecessary because the bill had already been amended to clarify that it does not affect the rights of individuals or businesses that are currently enshrined in the law. The bill would also make it clear that a marriage is between two people, in an effort to ward off some far-right criticism that the legislation could endorse polygamy.

Republican Senator Thom Tillis of North Carolina, who has been lobbying his GOP colleagues for months to support the legislation, noted the number of religious groups that support the bill, including the Church of Jesus Christ of Latter-day Saints. Days. Some of those groups were part of the negotiations on the bipartisan amendment. “They see this as a step forward for religious freedom,” says Tillis.

The Utah-based religious movement with nearly 17 million members said in a statement this month that church doctrine would continue to view same-sex relationships as contrary to God’s commandments.

Most Republicans continue to oppose the legislation, saying it is unnecessary and citing concerns about religious freedom.. And some conservative groups have stepped up their opposition in recent weeks, putting pressure on Republican supporters to change their vote.

“Marriage is the exclusive, lifelong conjugal union between one man and one woman, and any deviation from that design undermines the indispensable goal that every child be raised in a stable home by the mother and father who conceived it.” wrote Roger Severino, vice president for domestic policy at the Heritage Foundation, in a recent blog post arguing against the bill.

In an effort to get the 10 Republican votes needed to overcome filibustering in the 50-50 Senate, Democrats delayed considering them until after the midterms, hoping that would ease political pressure. about senators from the Republican Party who might be wavering.

The final endorsement of 12 republicans it gave the Democrats the votes they needed.

Along with Tillis, Maine Sen. Susan Collins and Ohio Sen. Rob Portman supported the bill from the start and have lobbied fellow Republicans to support it. Also voting in favor of the law were Republican Senators Richard Burr of North Carolina and Todd of the same region. Richard Burr from North Carolina, Todd Young from Indiana, Shelley Moore Capito from West Virginia, Mitt Romney from Utah, Joni Ernst from Iowa, Roy Blunt from Missouri, Cynthia Lummis from Wyoming, and Lisa Murkowski and Dan Sullivan from Alaska.

Just before its approval, Collins thanked his fellow Republicans who supported it. “I know it hasn’t been easy, but they’ve done the right thing,” Collins said.

Lummis, one of the most conservative members of the Senate, spoke before the final vote about his “rather brutal soul-searching” before endorsing the bill. He said he accepts his church’s belief that marriage is between a man and a woman, but noted that the country was founded on the separation of church and state.

“We do well to take this step, not by embracing or validating each other’s devout views, but by simply tolerating them,” Lummis said.

Baldwin said earlier this month that many Republicans’ new openness on the issue reminds him of “the arc of the LBGTQ movement to begin with, in the early days, when people didn’t come out and people knew gay people from myths and stereotypes”.

“And little by little the laws have been happening,” he said. “It’s the story.”