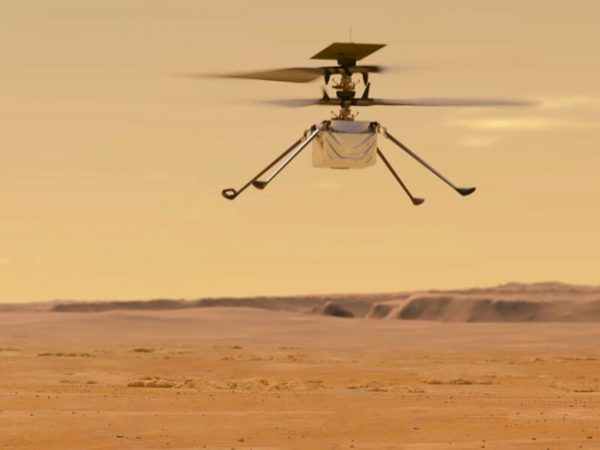 This is the video of the Ingenuity helicopter working almost perfectly.

Images recently downloaded from a September flight have allowed the Perseverance rover team on Mars produce a video of the Ingenuity helicopter working almost perfectly.

Video footage of flight number 13 of the Ingenuity helicopter on September 4 provide the most detailed view yet of the helicopter in action, according to the POT.

Ingenuity is currently preparing for its flight number 16, scheduled for no earlier than Saturday twenty November, but the Flight 13 from 160.5 seconds stands out as one of the most complicated in Ingenuity.

It involved flying over varied terrain within the geological feature “Séítah” and image an outcrop from multiple angles for the rover team.

The images, acquired at an altitude of 8 meters, complement those collected during the Flight 12, providing valuable information for Perseverance scientists and vehicle drivers.

Captured by the Mastcam-Z from the rover’s two cameras, a video clip of Flight 13 shows most of the flight profile of the helicopter 1.8 kilograms. A second video provides a foreground takeoff and landing, which was acquired as part of a scientific observation to measure the dust plumes generated by the helicopter.

“Even 300 Metters of distance, we get a great close-up of takeoff and landing through Mastcam-Z’s ‘right eye’. And although the helicopter is little more than a blob in the wide view taken through the ‘left eye’, “it gives viewers a good idea of ​​the size of the environment it is exploring. Ingenuity“.

During takeoff, Ingenuity raises a small column of dust that the right camera, or “eye,” captures by moving to the right of the helicopter during the climb. After its initial ascent to the planned maximum altitude of 8 meters, the helicopter performs a small pirouette to align its color camera for exploration. Ingenuity then leans over, allowing the thrust of the rotors to begin moving it horizontally through the thin Martian air before exiting the screen.

Later the helicopter came back and land close to where took off. The team targeted a different landing site, about 12 meters from takeoff, to avoid a ripple of sand in which you landed when completing the Flight 12.

Although the view from the left eye of Mastcam-Z it shows less of the helicopter and more of Mars than the right, the wide angle gives a glimpse of the unique way the Ingenuity team programmed the flight to ensure success.

“We took off from the crater floor and flew over a raised ridge before diving into Séítah,” said Ingenuity Chief Pilot Havard Grip of JPL.

“Since the filter Helicopter navigation prefers flat terrain, we program in a waypoint near the ridge line, where the helicopter slows down and hovers for a moment. Our flight simulations indicated that this little ‘respite‘would help the helicopter to stay on course despite significant terrain variations. He does the same on the way back. It’s amazing to see this happen, and it reinforces the precision of our modeling and our understanding of how to best operate with Ingenuity. “

The wide-angle view also shows how Ingenuity maintains altitude during flight. After an initial ascent to 8 meters, the helicopter’s laser altimeter watch a change in elevation from the ground below as it heads northeast toward the ridge line. Ingenuity fits automatically, ascends slightly as it approaches the ridge and then descends to remain 8 meters above the undulating surface.

Once it flies to the right, out of sight, Ingenuity collects 10 images of the rock outcrop with his color camera before returning to the framing and land again at the target location.

After the flight 13, Ingenuity went silent in October, along with NASA’s other Mars spacecraft during the solar conjunction of Mars, when the Red Planet and the Land They are on opposite sides of the Sun, which prevents most communications. After the conjunction, Ingenuity performed a brief proof experimental flight before starting the flight fifteen, which began the multi-flight journey back to nearby Wright Brothers Camp, its starting point in April.