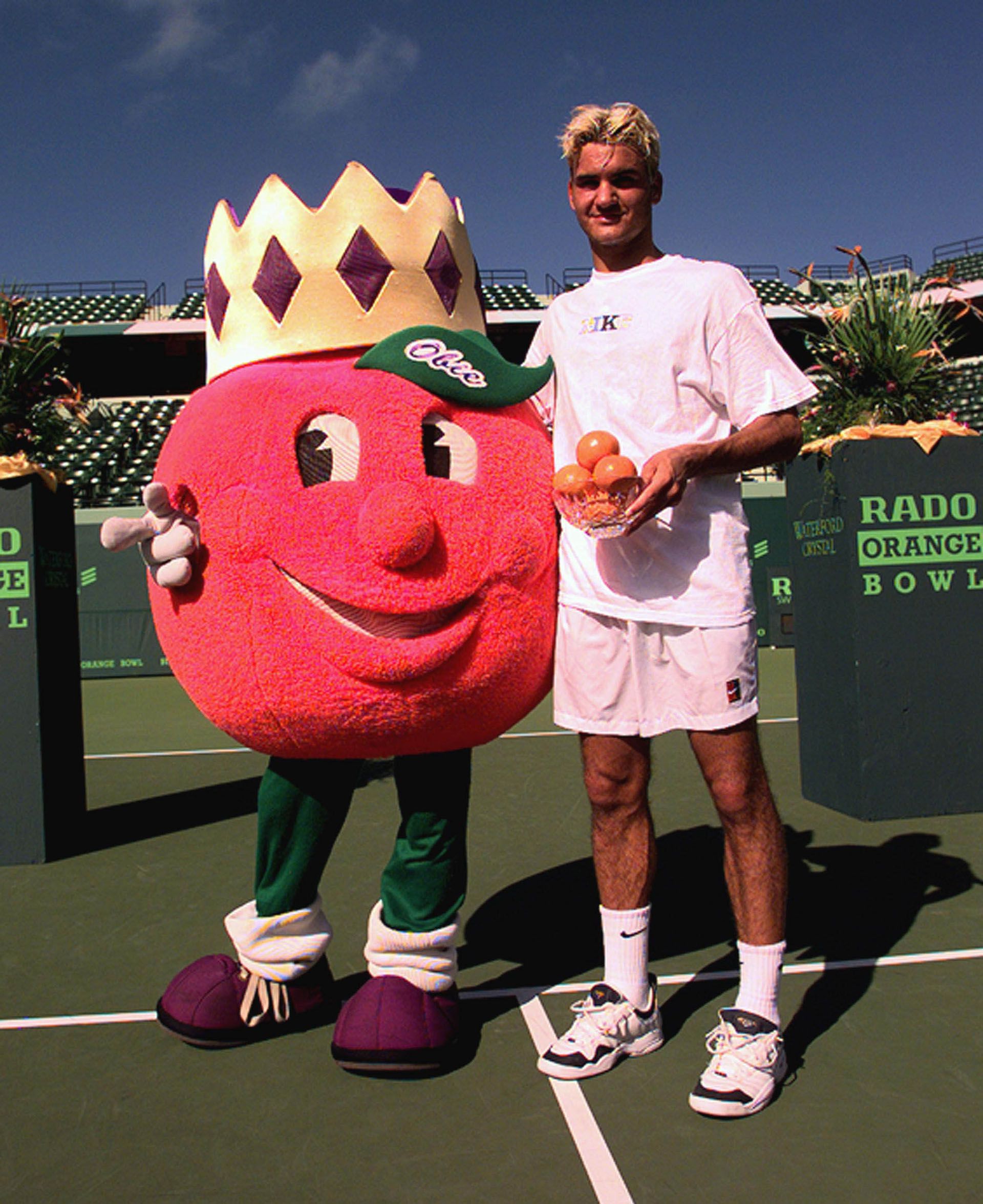 It is very difficult to imagine any tennis player who has embodied elegance and chivalry more perfectly than Roger Federer. To his perfect shots and his skill as a dancer to move on the court, add his temperance to assimilate the falls and his sobriety in victory. It is difficult, for the vast majority who only knew him after his arrival at the top, to conceive that at some point the image he projected was far removed from the aesthetic of the immaculate-looking gentleman who got tired of lifting trophies and walking his triumphant smile through the stadiums around the world.

There was a time that was perhaps not beautiful for Federer, but he was truly free. Some photos from that time show him with blond hair, like the one he wore when, at the age of 17, he beat an Argentine boy in the final of the Orange Bowl in December 1998 who also aimed to reach the top: the Wizard William Coria. The Swiss, who would end that year as number 1 in the junior world, already showed a good part of the technical conditions that would take him to the top, although it was difficult for him to hold on to the necessary discipline to fulfill his dream of becoming one of the elite.

Outside the courts, the habits of Roger, who at the age of 16 dropped out of school to devote himself to tennis (“I never really liked school,” he would admit years later), were those of many boys his age, with higher priorities. pointed towards the side of past fun than to be one of the best athletes in history. I listened with devotion to heavy metal, that played in his headphones before the games, and he spent hours playing with the Playstation in his room, where a poster of the actress Pamela Anderson, a beauty icon of the 90s, was displayed. “We were always watching Baywatch,” he would explain in a note for american magazine GQ with a hint of longing.

Of course, none of these predilections implied an obstacle to progress in tennis. What did show him off center was, for example, his difficulty in assuming the effort that an aspiring star of the circuit needed to make. “I was lazy” Swedish Peter Lundgren, one of Federer’s first coaches, said in the interview he gave for the book “Master”, by the American Christopher Clarey, about the life of Roger. Further, in the same publication, the Algerian Paul Dorochenko, his physical trainer at the time, stated that “I was emotionally fragile, unable to accept defeat” and that even “training was mediocre”. And he added in that sense: “He was a very nice, open and pleasant boy, and at the same time very hyperactive, who did not stop singing and playing dumb. But he didn’t come to the physical preparation and I had to go find him, so I had to punish him over and over again”. These testimonies led Clarey to assure that “if they had analyzed him in therapy, perhaps Federer would have been diagnosed with some attention deficit in his adolescence.”

Of course, Federer is far from being the only tennis star who navigated troubled waters during his adolescence. Roger’s predecessor in many ways, the Swede Bjorn Borg represented in the 70s the correction within the court to the limit of exasperation, to the point that it was known as The Iceman because he showed practically no reactions. But at 15 years old, when he already guessed the great destiny that awaited him and was about to debut in the Davis Cup, he had unbearable ways. In an interview by César Litvak published by The graphic in January 1987, Borg recounted that in practice for that series against New Zealand in 1972, after a bad hit he broke a racket and launched a cataract of insults. His coach, Lennart Bergelin, who was watching practice from the stands, called him out, and Bjorn threw an empty beer can at him. The coach then called him to the audience and, when he was close, gave him a slap in the face that, when saying The Icemanknocked him down two steps. Far from what such savagery would generate 35 years later, with a probable complaint for assault on a minor among other things, Borg (who played all three points in Sweden’s win against New Zealand 4-1) was grateful to Bergelin and He said that blow had shown him the way. “That’s when I understood that without discipline, without a mentality and without concentration, I wouldn’t get anywhere. If it hadn’t been for him and that slap, I wouldn’t have been anything,” said former rebel Bjorn.

Federer began to find the way when he fully immersed himself in his professional career, although there were ups and downs, as the Argentine could enjoy firsthand Franco Squillari, one of the privileged ones who can hold a favorable record against one of the best tennis players in history, whom he beat without losing sets the two times he faced him. Franco Squillari told Infobae the memories of the Roger with whom he had to play.

The first crash was Hamburg 2001, when the Swiss was already 18th in the ranking. “He had already passed his rebellious stage off the court, but he still had emotional shortcomings in the games beyond the fact that he was growing very fast,” explained the semifinalist of Roland Garros 2000 from Tucumán, where he attended the South American Tennis Association for children under 16 as Development Director of the Argentine Tennis Association. “He didn’t dominate when they played him heavy on the backhand, and being left-handed I found that shot more easily. When he was sought many times on that side, he failed and the entire structure of his game collapsed, although he already had a very winning temperament and forced you to play with a very high intensity, ”he specified.

Federer himself would relate over time to what extent it marked him that day, in which smashed a racket a few meters from the umpire after the game, which earned him the repudiation of the German public, and he was left crying in the locker room. “I behaved terribly badly and at that moment I decided that I could not continue like this. I couldn’t behave that way,” she expressed.

Already hand in hand Mirka Vavrinec, whom he would later marry, underwent a sudden change in his personality. He focused on repairing the flaws in his game and managed to turn his winning temperament on a positive course to become a elegance Icon, that aroused admiration in the public and attraction for big brands, who fought to have him as a representative. The indiscipline was left behind forever and the world of tennis, which still dreams of having him back on the courts, took it upon himself to enjoy it.

Five unforgettable moments in the career of Guillermo Vilas

Interview with Francisco Cerúndolo, No. 27 in the world and university student: “I didn’t know how tennis was going to go and I didn’t want to end up as a teacher