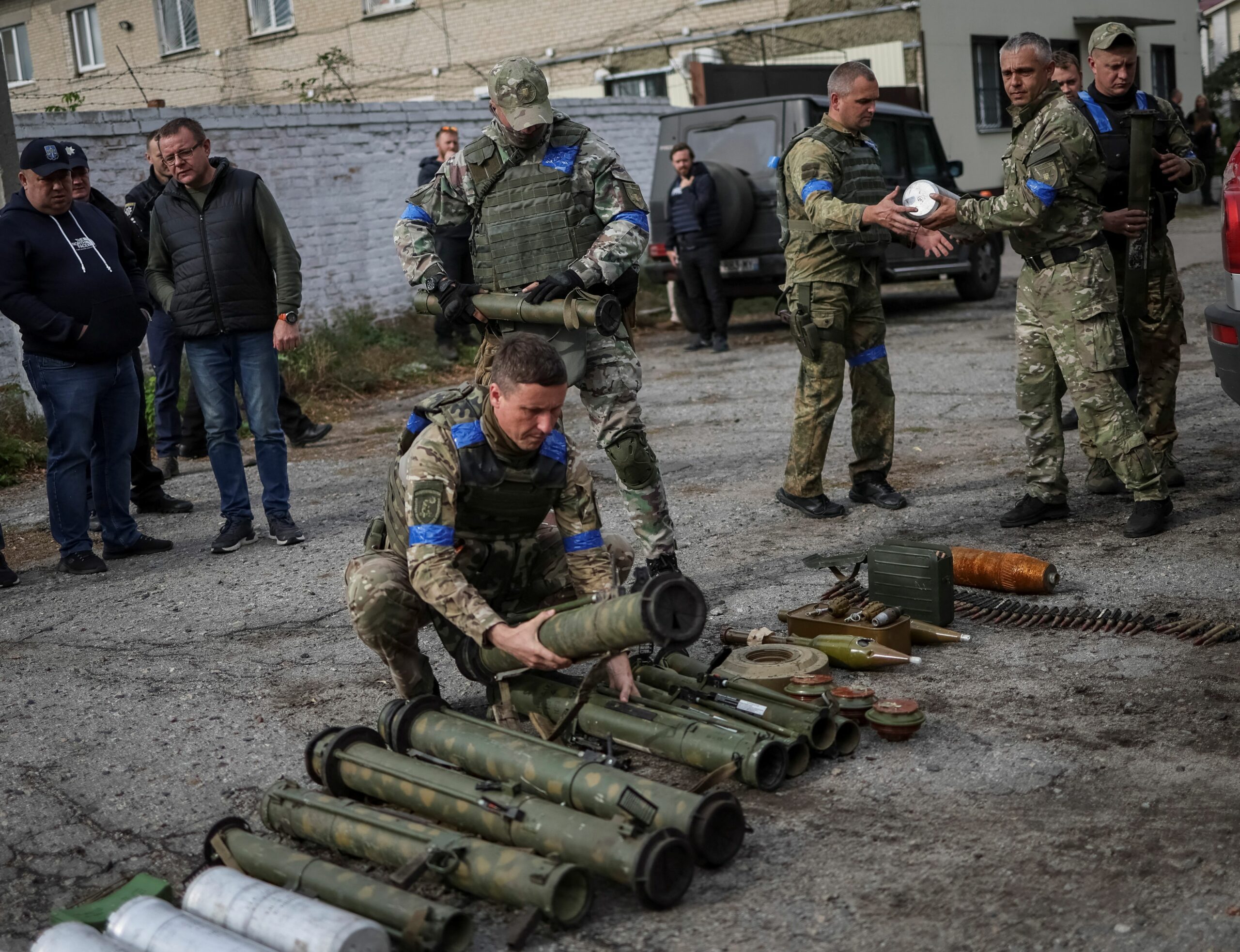 The liberation by Ukrainian forces of most of the Kharkiv region and the withdrawal of Russian troops in the biggest defeat in five months, It greatly hinders Russian President Vladimir Putin’s stated goal of seizing the entire Donetsk province and securing control over Lugansk.

Ukrainian troops have liberated “hundreds of cities and villages” in the 201 days of war, said the President of Ukraine, Volodymyr Zelensky, in this third phase of the Russian invasion, especially in the eastern region of Kharkiv and in the south.

In the first province, kyiv has regained control of more than 3,000 square kilometers in a week and in the second 500 in two.

In addition, in the north of the region the troops from kyiv have already arrived in “some places” to the border with Russia, the State Border Service and Synegubov said on Monday.

The Ukrainian advance in Kharkiv has been such that a relatively small strip currently remains in Russian hands on the eastern side of the Oskil Riveras can be seen on the war map of the Russian Ministry of Defense itself.

According to British intelligence, which says there are “isolated pockets of resistance” of Russian troops in this stripthe territory liberated by Ukraine “it is at least twice the size of Greater London”the British capital and its surroundings.

The pro-Russian head of the Kharkiv region, Vitali Ganchev, justified the withdrawal of troops from Kharkiv on Monday on public television, citing the number of Ukrainian soldiers “It was at least eight times higher than that of our troops.”

Russia, which has described the withdrawal to Donetsk as “regrouping” and whose lack of transparency and miscalculation have been criticized even by those loyal to the Kremlin such as the Chechen leader, Ramzan Kadyrov, who has reacted to the biggest defeat suffered on the ground since last April – when he had to withdraw forces from the regions of kyiv, Chernigov and Sumi-, with bombing.

THE RUSSIAN STRATEGY IN DONETSK IN QUESTION

“The Ukrainian reconquest of Izium ended the possibility that Russia could achieve its stated goals in the Donetsk region”pointed out today the American Institute for the Study of War (ISW).

The reason is that Russian forces, which have focused on occupying small villages throughout the summer, would no longer have any support for an advance from the north.

From Izium the Russian Army also controlled the towns leading to Luganskwhose region had taken for granted at the beginning of July, but where now the Ukrainian Army is regaining ground.

“In the Lugansk region, Russian servicemen and their families left the city of Svatoveonly the soldiers of the call remained “popular militia”said the General Staff today.

ADVANCES IN LUGANSK AND THE SOUTH

According to the governor of the province, Serhiy Gaidai, in Pishchane the Ukrainian flag flies again, as in Kuzemivka.

The panorama of the Russian Army in the south is not better, where there is another counteroffensive underway and which, according to the ISW, in fact served to mislead the Russian command by making him believe that there would only be a big one on this front, but not in the east as well.

Over there, the Armed Forces of kyiv have since the end of August recovered almost 500 square kilometers of occupied landas indicated on Monday by the spokeswoman for the Southern Command, Nataliya Gumenyuk.

THE UKRAINANS, HAPPY FOR THE LIBERATION

In Izium, the inhabitants showed their “happiness” at the arrival of the Ukrainian troopswho in their counteroffensive dislodged the Russian troops from here.

Sunday morning, Nadia Nesolena, 61, was on the streets when the first Ukrainian soldiers entered this city of 50,000 inhabitants. before the war, and had become a key logistics and supply point for Russian troops.

“We welcome them with tears in our eyes. We had been waiting for them for months. We are very happy”tell the agency AFP on a hill in the city, where the only antenna that allows cell phones to capture the network is located.

the russian occupation “it was very difficult but we were lucky to have a house with a basement and food”says Nadia.

On the same hill Yuri Kurochka64, says he can’t find words to express his joy.

“All bad things come to an end”says this man who climbed the hill to call his relatives, refugees in kyiv and Kharkiv since March, when the arrival of the invading Russian troops.

To the Ukrainian troops he shouts: “don’t go anymore, please. Don’t leave us here with these Russians!”

In this northeastern Ukrainian city, evacuated on Saturday night by the last Russian soldiers fleeing the Ukrainian counteroffensive, a huge column of white human could be seen on Sunday.

The Russian ammunition depot that exploded on Saturday, before the return of Ukrainian troops, was still burning on Monday.

Grigori Pivovar, 61, also saw the Ukrainian soldiers on Sunday. “We had tears in our eyes. What happiness to see our boys come”.

The man was also grateful to be able to go out into the open air and walk around the city, almost deserted, with his teenage son, Kirilo.

Several inhabitants of Izium told AFP that many of their pro-Russian neighbors headed east, even before the withdrawal of the soldiers from the Kremlin. According to Moscow, thousands of people have been sheltered in Russia in recent days.

The six months of fighting in this city close to the front, in the Kharkiv region, and occupied since spring by Russian troops, have left their mark.

Houses, buildings, shops, a religious temple, two bridges and a school were destroyed by the explosions, reporters from AFP.

In the city hall building, burned, the Ukrainian flag has waved againand soldiers patrol the streets.

Dozens of Russian military vehicles remain abandoned on one side of the roads, recognizable by the letter Z, symbol of the occupying forces. And along the way, craters, burned trees, pieces of shells and unused ammunition.

Taking over the weekend this important city, on the highway between Kharkiv and Donbas, the Ukrainians broke the Russian encirclement over the part of this industrial basin controlled by kyiv.

In response to the Ukrainian counteroffensive, Russian forces have attacked three districts in the city of Kharkivin bombings in which one person died and six were injured, according to the governor.

Russia’s military spokesman, Igor Konashénkov, maintained that the artillery “continues to deal high-precision strikes against the units and reserves of the Ukrainian Kharkiv Army.”

The city, to which more than a million citizens have returned since the start of the war and which Russia never managed to take, has been left without electricity and water supply due to the bombing, said the city’s mayorIhor Terekhov.

“Thank God that the Ministry of Defense has finally started to launch attacks against the (Ukrainian) infrastructure. Let’s hope that, once and for all, all this will have a firmer character”, the leader of the annexed Ukrainian peninsula of Crimea, Sergei Axiónov, told the Russian press in another criticism of Moscow.

Despite the severe setback suffered in Kharkivthe head of the Russian Security Council, Nikolai Patrushevassured today that Russia will “achieve the goals” of the special military operation in Ukraine”and the Kremlin spokesman, Dmitri Peskov, ruled out that it is time to sit down to negotiate with kyiv.

Of course, according to what the Main Directorate of Intelligence of Ukraine (GUR) indicated the day before, Moscow has dismissed the lieutenant general of the Western group of the Armed Forces.