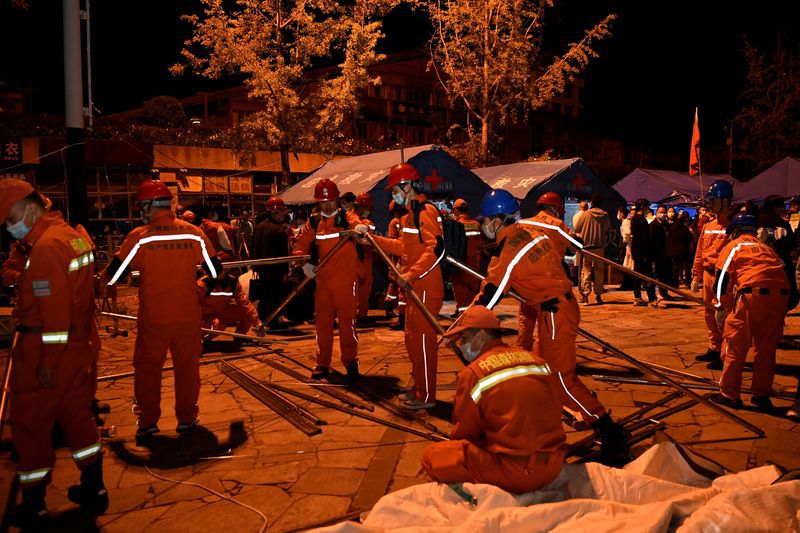 A Chinese laborer who helped heal his colleagues’ wounds after a deadly earthquake and then went missing in the mountains was rescued 17 days later.

Gan Yuan employee of the Wandong Hydropower Plant, He was found alive but wounded this Wednesday by a local residentreported the state-owned China National Radio (RNC), who described the rescue as a “miracle of life”.

Gan was working with his colleague Luo Yong when the quake struck, and the two remained on site to tend to their injured colleagues and prevent flooding from the dam’s outflow.

They walked about 20 kilometers to try to leave the plant, but Gan, who suffers from severe myopia, lost his glasses in the earthquake and had difficulty getting out of the mountainous area.according to RNC.

The two men desperately tried to send signals to rescuers.

“We take off our clothes, hang them on tree branches and wave them”Luo told the radio.

They eventually decided to have Gan stay in one place while Luo looked for help.

Luo was found on September 8 after using fire to attract the attention of a helicopter, but when they reached the temporary shelter of Gan, on September 11, he was already gone.

Days ago, local farmer Ni Taigao returned to his village at the foot of the mountain where the hydroelectric plant is located and learned of Gan’s search.

The villager joined the search on Wednesday and after two hours of walking, he heard Gan’s muffled screams and shortly after found him under some trees.

Gan was extracted by helicopter and taken to a hospital, where doctors determined he suffered multiple bone fracturesaccording to official television CCTV.

Images of CCTV Gan was shown shaky and haggard as he confirmed his name to rescuers and ate a sandwich they offered him.

According to different local media, Gan Yu’s vital signs are stable and he is in good psychological condition.

“When I located him he was in good condition, but when he saw me cry a lot he told me that he was lucky to have met me”said Ni Taigao, the villager who found it.

Due to the particular orography of the area, local rescue forces are being assembled to be able to transport him down the mountain.

Since then, Gan Yu has been trapped in the area without knowing how he was able to feed until he was found near collapse by the villager.

The earthquake on September 5 was the most intense since 2017 in Sichuan province, which is located in an area with frequent seismic activity and was already the scene of a catastrophic earthquake in May 2008, with a magnitude of 8 degrees. and that left more than 90,000 dead and disappeared.

Sichuan has suffered in the last five years 455 earthquakes of a magnitude equal to or greater than 3 and five earthquakes of magnitude 6, the same as the earthquake that occurred at the beginning of September, which in official figures published until September 12 had left the least 93 dead and 25 missing. EFE