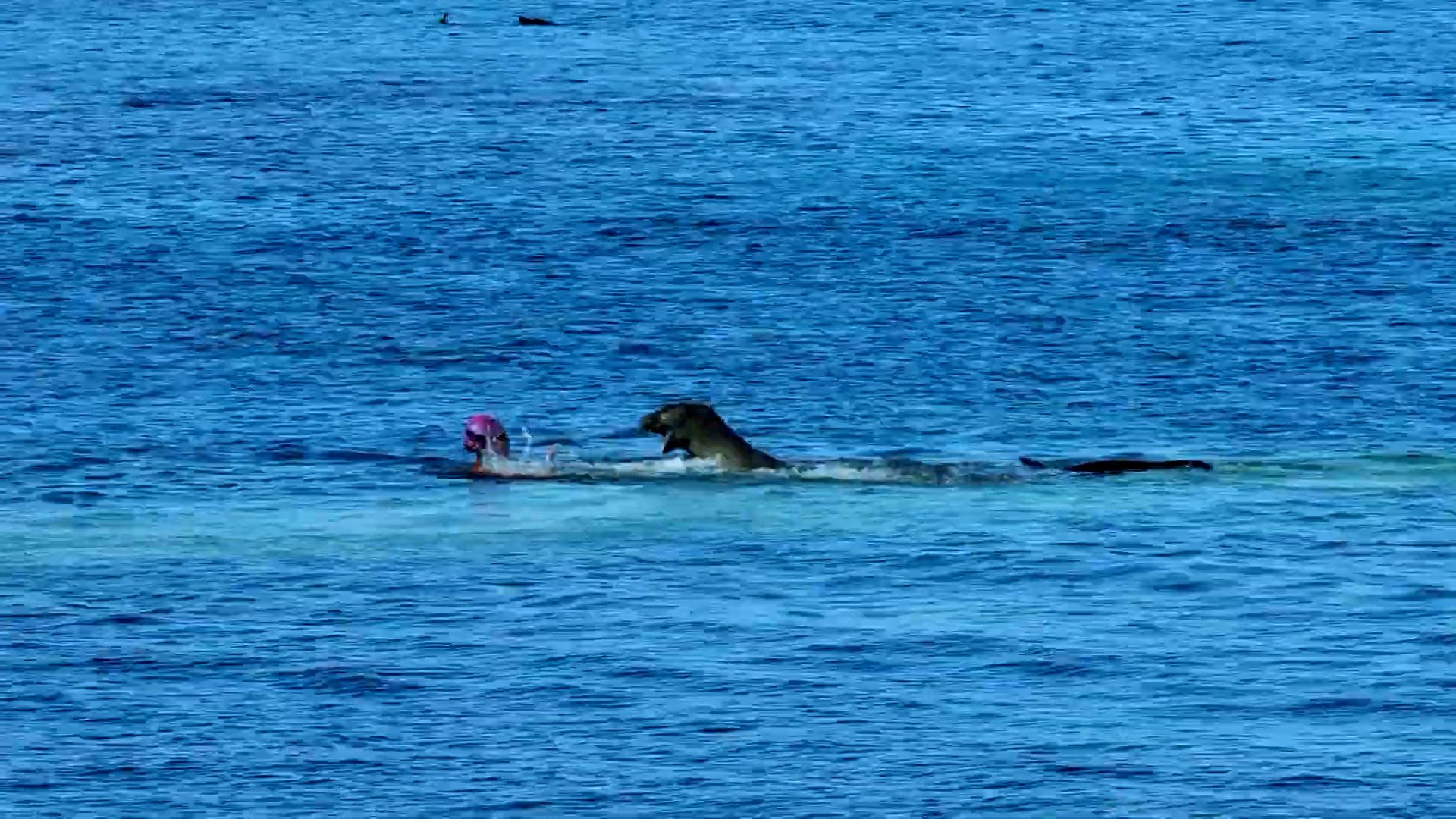 A swimmer was injured by a monk seal in Hawaii after approaching the animal and her newborn pupdespite the warnings.

A video recorded on July 24 in front of the beach of kaimananear Honoluluin Hawaiishow to the seal attacking the female swimmer in an attempt to drive her away.

According to local media reports, the mother sealnicknamed Rocky by the locals, she was barking and trying to find her two week old puppyprompting other swimmers to get out of the water.

Nevertheless, one woman stayed and only swam back to shore when other swimmers yelled at her to get out of the waterwhile Rocky and the pup headed back to the area of ​​the beach where they had been resting.

As the woman swam, the pup approached her, causing Rocky’s protective maternal instincts to kick in, attacking the woman.

In the video, viewers can be heard yelling “get out, get out” as Rocky approaches the woman. A boat is going to help her get to shore before two men pick her up and take her to safety.

Markus Faigle of Honolulu told Hawaii NewsNow: “I heard her screams, this poor woman was terrified.”

Curt Otsuka, from Moanalua, also witnessed the attack. He told a half-Hawaiian: “If it wasn’t for the kayak boy paddling to save her, she would have been bitten.” 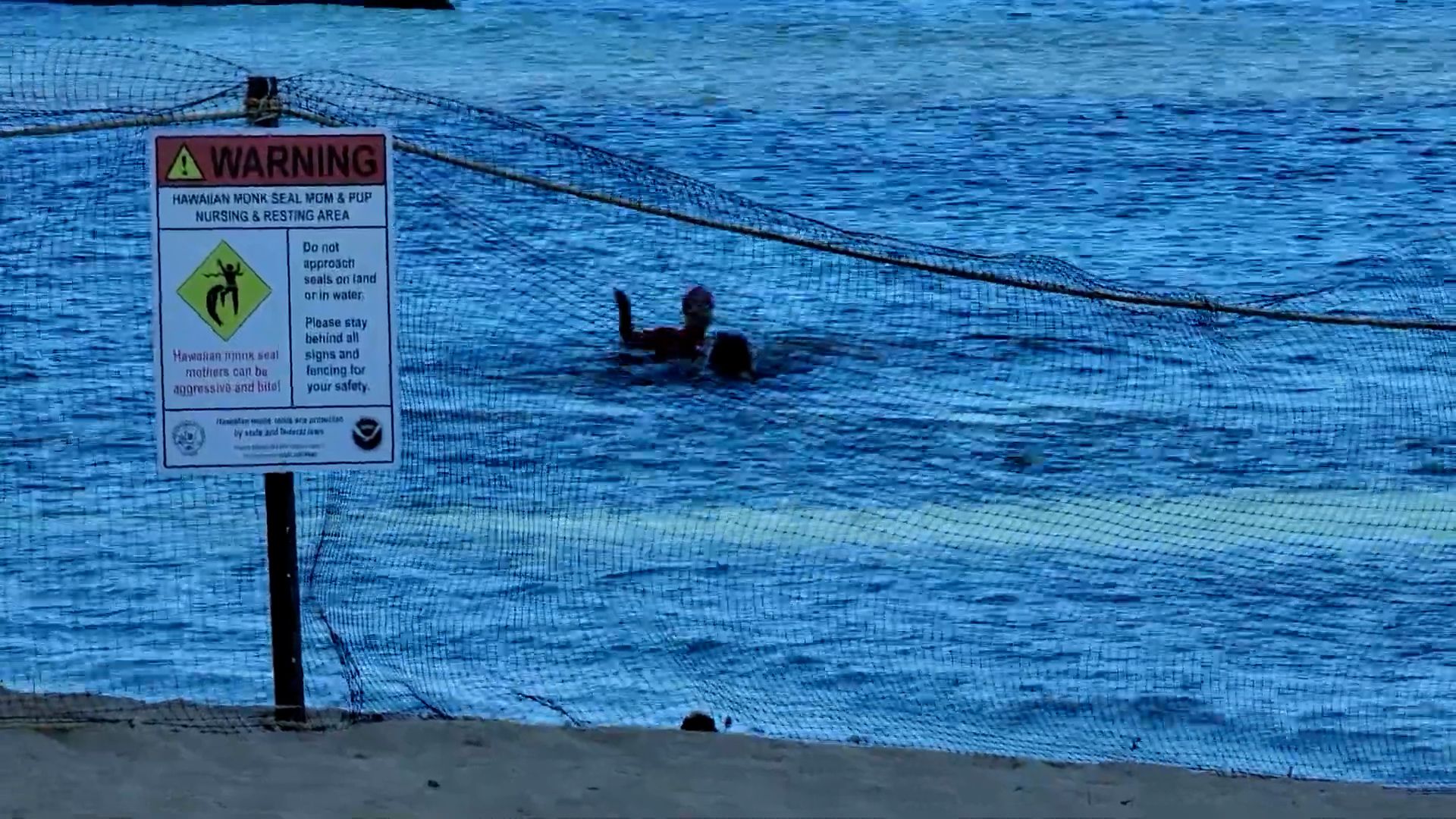 The woman was injured and was “transported by City & County EMS for further assistance”according to a Facebook post from Hawaii Marine Animal Response (HMAR).

Larry Akiyama, a regular beach resident, told the local news station KHON2 who has noticed that people cross the fenced area erected to protect Rocky and his pup.

“They’re not listening, they just go through it, we tell them not to go there and they still go through it.”said.

Hawaiian monk seals can give birth to just one pup a year, which, like humans, takes nine months to gestate. The mothers will nurse their pups for about six weeks, during which they do not eat or leave the pup at all. Once she finished nursing, the mother leaves the pup and returns to the ocean to find food.

HMAR has advised that swimmers should leave the water when the mother monk seal and her pup are in the area, and stay at least 50 meters away from them, as nursing mothers can be very protective and injure swimmers.

“We continue to advise people not to participate in water activities when a monk seal mother with pup is in the area and to stay at least 150 feet away from seal mothers with pups.”HMAR said in its Facebook post. “Continuous surveillance is recommended for several more weeks until the mother monk seal weans her pup.”

Native only to the Hawaiian archipelago, Hawaiian monk seals are “one of the world’s most endangered seal species”according to the National Oceanic and Atmospheric Administration (NOAA).

In the 1960s, population levels began to plummet and now only 1,600 individuals remain. Low juvenile survival, driven by limited prey availability, is thought to be behind the decline. Conservation efforts are now helping to increase the numbers.

In the United States, Hawaiian monk seals are protected at the federal and state levels, and violations can result in a maximum fine of $50,000.

How is Finland fighting to save the world’s most endangered seals?