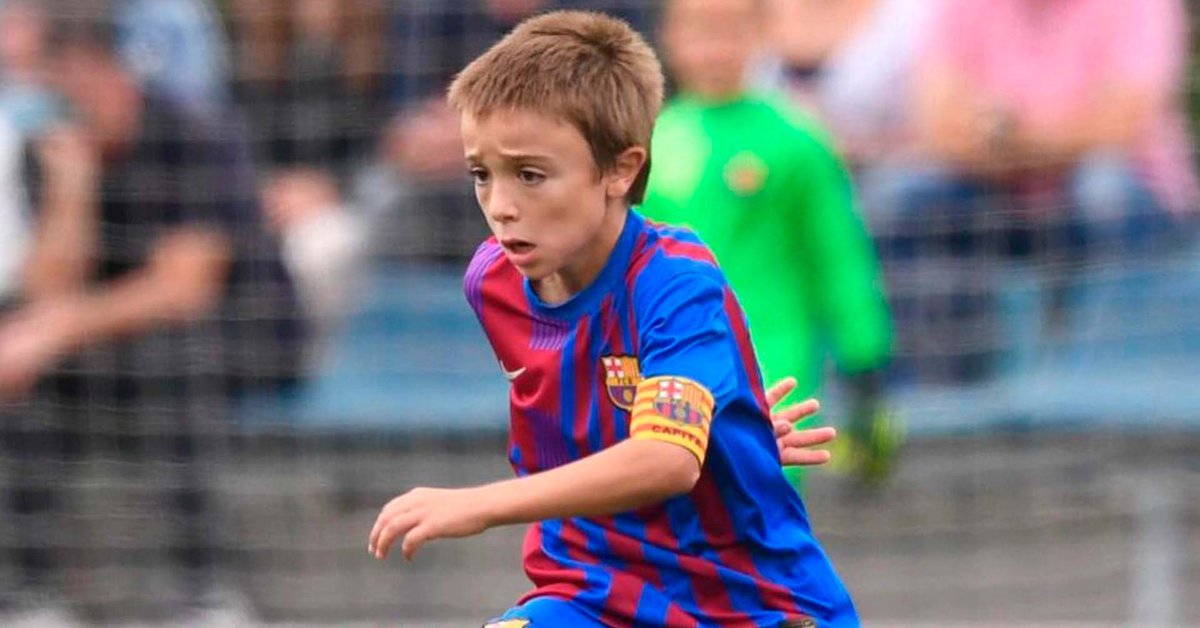 1, 2, 3, 4, 5, 6, 7, 8, 9, 10, 11, 12, 13, 14, 15 … Bounces the ball against the fronton and controls again, sleeps it on the instep, 16 , 17, 18, 19 … He lifts it with the shin, gives it extra height and resumes the rhythm, 20, 21, 22, 23 … “The last time we counted it reached 1,500, but it has been a long time since we have counted because it gets bored”, they have about Pedrito Juarez, the 7-year-old Argentine who scores goals like Messi and dazzles from La Masía, the talent plant of the Barcelona. The video of the little boy (born in Salta on February 17, 2014) playing little games with enviable skill is just one of the many that feed social networks. and they generate enthusiasm among the Albiceleste fans and the culé team. In a club that enjoyed the Flea to the fullest, another Flea appears with the strength of his innate talent and the audiovisual testimonies that drive him.

The boy made headlines a few days ago when his goal against UE Sant Vicenç dels Horts, a football school in a homonymous municipality in Barcelona, ​​went viral. The game was 5-5 when he eluded all his rivals to deposit the ball in the net and provoke the applause of the Ciudad Deportiva Joan Gamper.

But Pedrito spills magic from weekend to weekend in the Benjamin D division team (football 7), where he is captain, or in Prebenjamines, where he is usually summoned to give a hand. Also in the fronton near his home, in which he rehearses the tricks that he often copies from videos on YouTube..

Boca fan, admirer of Tevez and Riquelme, his idol is Messi, to the point that he sleeps with a photo of today’s PSG figure. At the age of two, his family, made up of his father Gonzalo, his mother María Agustina, and his brother Santiago (10 years old), moved to the United States. In 2020, they put their bags back together and disembarked in Barcelona. Once settled there, he was part of a campus at Atlètic Sant Just to test his qualities and ended up playing all year. His dribbles reached the ears of Barça and Espanyol, whose scouts tempted him. After a test, he stayed at the Blaugrana, where he does not use No. 10 just because the numbering in these competitions goes from 1 to 7. Consequently, his number is 6.

Last weekend, Pedrito defended Barcelona’s jersey against Gava in Prebenjamines, where his team is in Second. And then he acted before Bellvitge in Benjamin, already in First. In both cases, it was measured against boys two years older. But, once again, he was undaunted.

“Pedro is a special case. When I was the coach of the youngest children, my oldest son, Pedro was always outside the lines with the ball and came and went. And he began to want to play more and more, ”said Gonzalo, his father, in an interview with the program Sale el Sol of the Imagen Televisión de México channel held in 2020.

Indeed, his father is the one who manages his Instagram account (@ pedritojuarez2014) and, together with his older brother, they transmitted their devotion to football. He never played officially, except at the college level in the United States. In Argentina, he enjoyed the ball but at an amateur level, in the traditional picados with friends.

Like the little star, he is a midfielder, although he laughs when asked if Pedrito’s illusion was imprinted in his DNA. “What Pedro does I could never do,” he often repeats, humble. But, beyond the transcendence that the captured flashes of his heir reached, and the pride that he provokes in his family every time they see him dribble, his environment understands that the mini fantasist should not run from the margins of play. For the demands and obligations, he still lacks.

“Children are children, that as parents we never have to forget. This is a game. You have to show them how important sport is, the values ​​that sport brings, how sacrificed it is to do a highly competitive sport, but always doing it in a game mode ”, was another of Papa Gonzalo’s sentences. Meanwhile, Pedrito will continue dreaming of his feints breaking borders like Messi’s, the symbol of his sleepless nights, whose photo accompanies him at night and marks the path of the next adventure with the ball.

13 phrases from Lionel Messi: the link with Sergio Ramos, Xavi’s arrival in Barcelona and the World Cup final

He worked for Barcelona, ​​left Boca to make his way to the Promotion and the squad nicknamed him “El gigolo”: Diego Martínez, the DT who returned Tigre to First