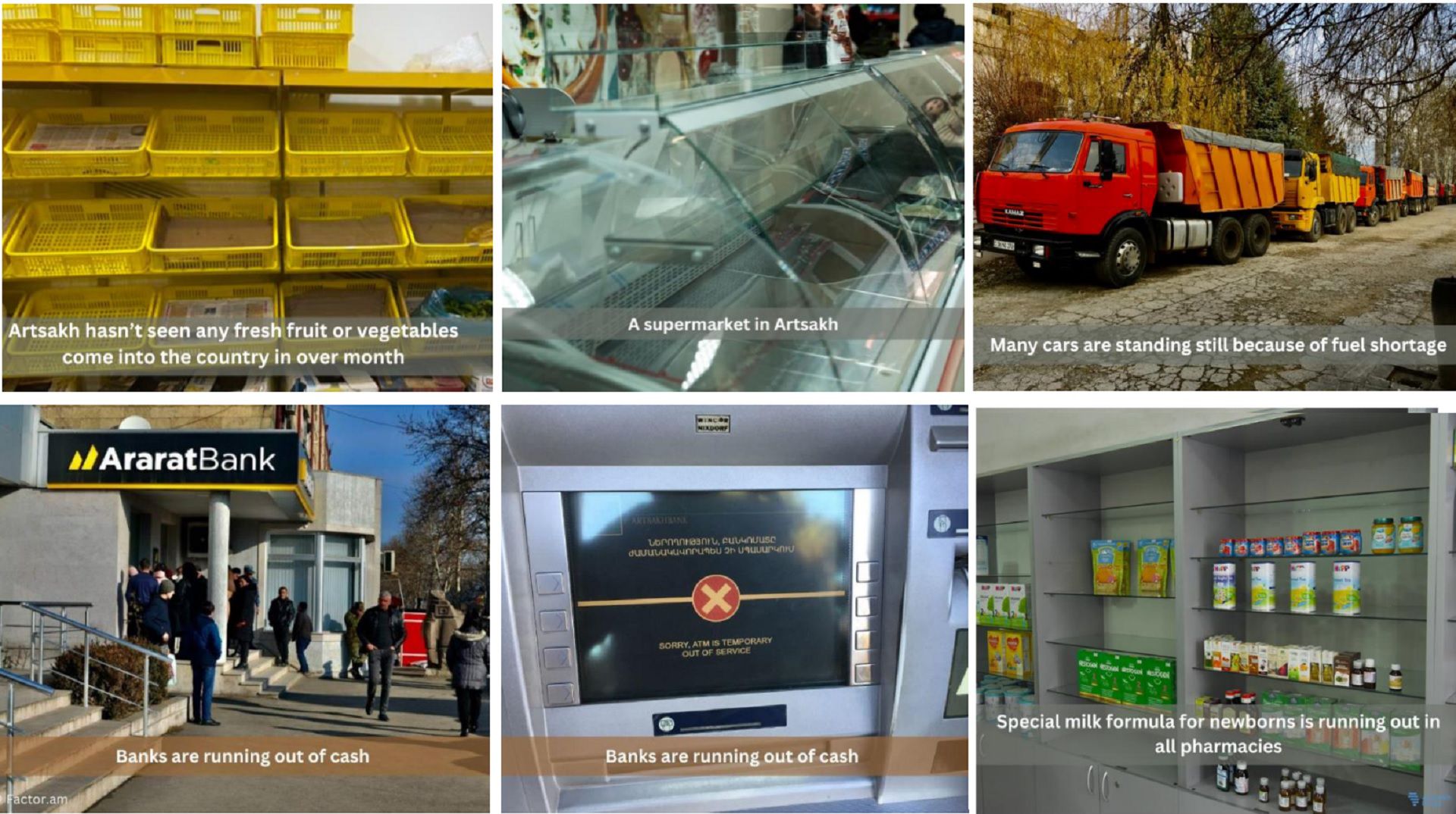 The supermarkets of Stepanakert, the capital of Nagorno Karabakha region disputed by Armenia Y Azerbaijanare increasingly empty due to the blockade of an essential road that connects this territory with Yerevan.

For more than a month, a group of Azerbaijanis has been blocking the Lachin corridorthe only road connecting this mountainous region of the Caucasus with Armenia.

“In the past 37 days, only the International Committee of the Red Cross and a very limited number of Russian peacekeeping vehicles have been able to cross the Lachin Corridor, which obviously cannot meet even a tiny part of the daily necessities of life. of 120,000 people”, denounced Armenia through the Foreign Ministry, which indicated that the blockade constitutes a war crime and that violates the Tripartite Declaration of November 9, 2020article 6 of which provides that Azerbaijan shall ensure the free movement through the Lachín Corridor of people, means of transport and cargo.

The activists presented themselves as environmental activists and allege that the blockade is a protest against illegal mines. But for Armenia, it is about a destabilizing action by its neighbor, Azerbaijan.

Both countries have been fighting since the early 1990s to control Nagorno Karabagh, an Armenian-majority enclave recognized by the international community as part of Azerbaijan, although it separated from this country after the collapse of the Soviet Union. This first conflict, which caused 30,000 deaths, resulted in an Armenian victory. But Azerbaijan took its revenge during a second war that claimed the lives of 6,500 people in the fall of 2020, allowing Baku to regain numerous territories.

The blockade of the Lachín corridor causes food and medicine shortages, and power outages.

“We don’t have electricity and sometimes the gas goes out. The children have neither food nor fruits”, Erna Gasparian, who works in the human resources sector, told AFP.

“It’s cold. We have small children, I have a one-month-old grandson and we are in a very bad state,” added Marina Ignatieva, an unemployed person.

For Mikhael Adjiian, a retired journalist, the situation is clear. Azerbaijanis “try to break us”, he claimed. “But we can take the cold, the hunger and all the rest,” she pointed out.

Temperatures are currently close to -9°C at night in this mountainous region, where about 120,000 people live.

The effects of the lockdown are also being felt at the Arevik Children’s Hospital. The chief physician, Karen Melkonian, fears that a “humanitarian catastrophe” will occur due to the lack of heating. “The hospital is heated by gas, but the boiler does not work without electricity. To start it you need electricity,” she explained.

Since 2020, Russian peacekeeping soldiers have been deployed in the region. But the Armenian authorities accuse them of not having prevented the blockade of the route.

“The danger of malnutrition and starvation is imminent. An explicit policy of ethnic cleansing is being implemented. The rights to freedom of movement, health, education, among others, are being violated. There are families that have been separated for 37 days, because their members were on different sides of the blockade,” said the Foreign Ministry.

On Tuesday, Russia urged Azerbaijan to unlock the corridor. Foreign Minister Sergei Lavrov called on his Azerbaijani counterpart, Jeyhun Bayramov, to release the route to comply with the November 2020 declaration.

The Red Cross, according to experts consulted by EFEtries to get some humanitarian supplies to the territory, which are not enough.

The organization is also in charge of moving to Armenia to serious patients who cannot be treated in Nagorno Karabagh, because many medical centers do not fully operate under lockdown conditions.

Initially, the demands of the Azerbaijani protesters were related to ecological problems, but as time passed, political proclamations began to sound. In particular, the activists are demanding to seize control over the Lachin corridor, which is currently run by Russian peacekeepers deployed in the region following the 2020 Nagorno Karabagh war.

According to the International Crisis Group (ICG), the conflict between Armenia and Azerbaijan is the second to take into account in 2023, after the one in Ukraine.