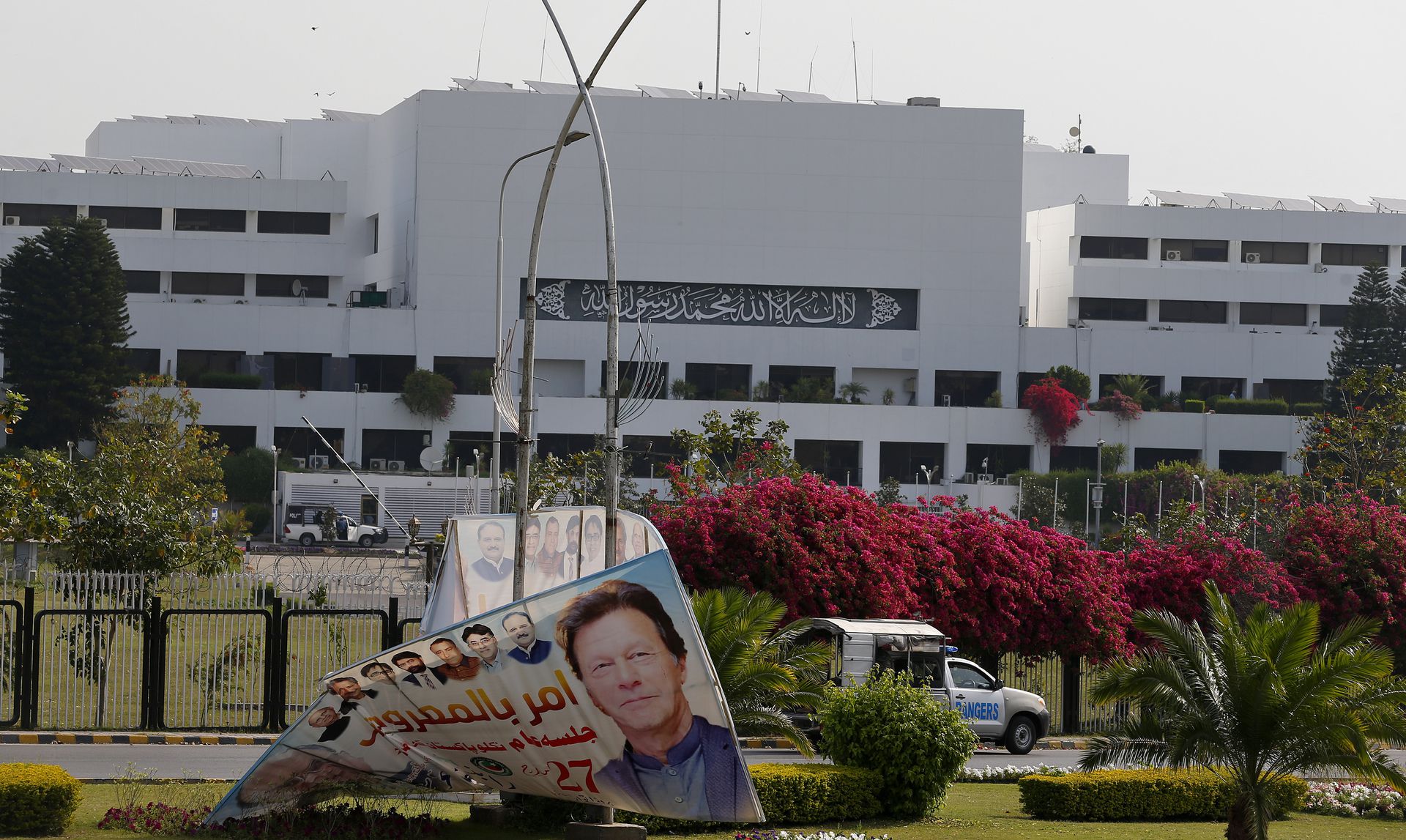 The President of Pakistan dissolved Parliament on Sundaysetting the stage for snap elections after the prime minister fended off a no-confidence motion earlier in the day.

Imran Khan called on President Arif Alvi to dissolve the National Assembly, or the lower house of Parliament, accusing his political opposition of working with the United States to topple his government.

Khan’s political opponents have called illegal the decision of the vice president of Parliament to throw out their resolution of no confidence and they promised to go to the Supreme Court.

The battle between Khan, a cricket star turned conservative Islamic leader, and his political opposition has plunged the nation into political turmoil.

The vice president rejected the opposition’s censure resolution after Information Minister Fawad Chaudhry accused the opposition of colluding with a foreign power to organize “regime change.”

Khan, who was not in parliament, went on national television to say he would ask Pakistan’s president to dissolve the body and hold elections.

“I ask people to prepare for the upcoming elections. Thank God, a conspiracy to overthrow the government has failed,” Khan said in his speech.

The opposition came to Parliament ready to remove Khan from power. They needed a simple majority of 172 votes in Pakistan’s 342-seat Parliament to unseat Khan, a cricket star turned conservative Islamic politician. Khan’s small but key coalition partners, along with 17 of his own party members, joined the opposition to oust him.

The political turmoil also prompted the country’s security agencies to lock down the capital of Islamabad.

Giant metal containers blocked roads and entrances to the capital’s diplomatic enclave and Parliament and other sensitive government facilities in the capital. A defiant Khan called on his supporters to stage demonstrations across the country to protest the vote.

Khan has accused the opposition of colluding with the United States to topple him, saying the United States wants him to go over his foreign policy decisions that often favor China and Russia. Khan has also been a strident opponent of the US war on terror and Pakistan’s association in that war with Washington.

Khan has circulated a memorandum that he insists provides evidence that Washington conspired with Pakistan’s opposition to overthrow him because the United States wants “me, personally, to go … and all would be forgiven.”

A defeat for Khan would have given his opponents a chance to form a new government and rule until elections, which were scheduled to take place next year.

Residents of Pakistan’s largest province, Punjab, were set to vote on Sunday for a new chief minister. Khan’s election faced a difficult challenge and his opponents claimed they had enough votes to install his election.

With 60% of Pakistan’s 220 million people living in Punjab, it is considered the most powerful of the country’s four provinces. Also on Sunday, the government announced the removal of the provincial governor, whose role is largely ceremonial and is chosen by the federal government. But it further deepened the political turmoil in Pakistan.

Pakistan’s main opposition parties, whose ideologies run the spectrum from left to right to radically religious, have been rallying around Khan’s ouster almost since he was elected in 2018.

Asfandyar Mir, a senior expert at the Washington-based US Institute of Peace, said the military’s involvement in the 2018 election undermined Khan’s legitimacy from the start.

“The movement against Imran Khan’s government is inseparable from his controversial rise to power in the 2018 elections, which was manipulated by the military to push Khan over the line,” Mir said. “That really undermined the legitimacy of the electoral exercise and created the basis for the current turmoil.”

The opposition has also accused Khan of economic mismanagement, blaming him for rising prices and high inflation. Still, the Khan government is credited with maintaining an $18 billion foreign reserve account and bringing in a record $29 billion last year from Pakistanis abroad.

Khan’s anti-corruption reputation is credited with encouraging expatriate Pakistanis to send money home. His government has also received international praise for its handling of the COVID-19 crisis and the implementation of so-called “smart lockdowns” instead of nationwide lockdowns. As a result, several of Pakistan’s key industries, such as construction, have survived.

Khan’s leadership style has often been criticized as confrontational.

“Khan’s biggest failure has been his insistence on remaining a partisan leader to the bitter end”said Michael Kugelman, deputy director of the Asia Program at the Washington-based Wilson Center.

“He has been unwilling to extend a hand across the aisle to his rivals,” Kugelman said. “He has remained stubborn and unwilling to make major commitments. As a result, he has burned too many bridges at a time when he sorely needs all the help he can get.”

Khan’s insistence that there is US involvement in attempts to overthrow him exploits a deep-seated mistrust among many in Pakistan of US intentions, particularly after 9/11, Mir said.

Washington has often chided Pakistan for doing too little to fight Islamic militants, even as thousands of Pakistanis have been killed in militant attacks and the army has lost more than 5,000 soldiers. Pakistan has been attacked for aiding Taliban insurgents, while being asked to bring them to the peace table.

“The fact that it has such easy traction in Pakistan speaks to some of the damage that US foreign policy has done in the post-9/11 era in general and in Pakistan in particular,” Mir said. “There is a reservoir of anti-American sentiment in the country, which can be easily exploited by politicians like Khan.”

Why the triple nuclear border between China, India and Pakistan became one of the most dangerous areas on Earth