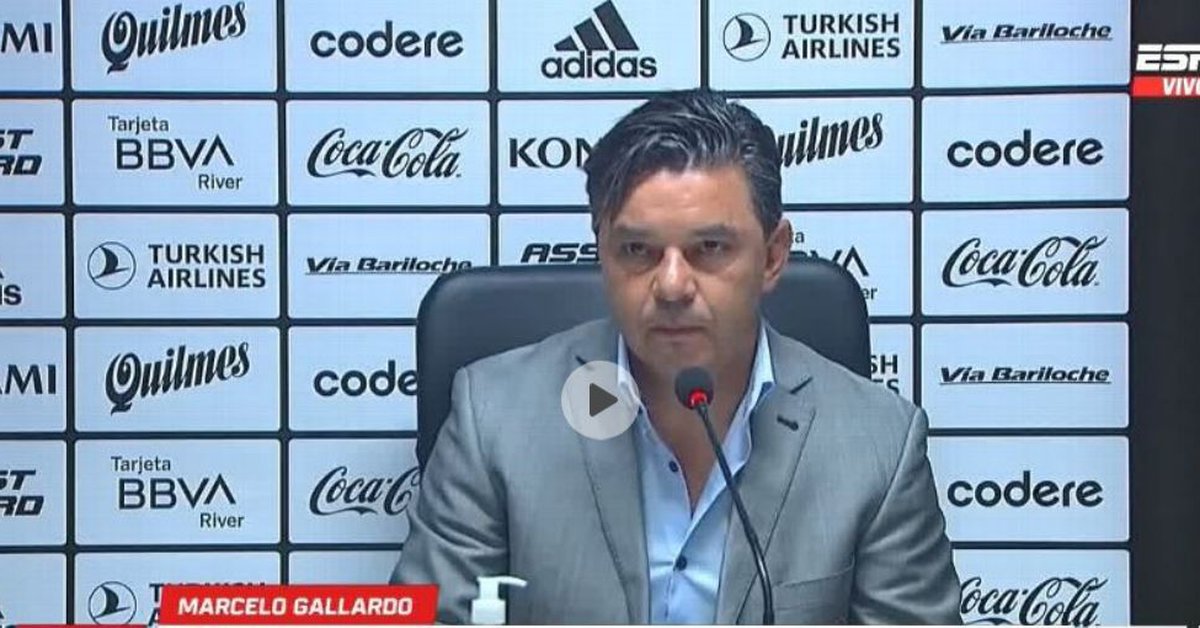 Marcelo Gallardo gave a press conference with mixed feelings. On the one hand, he was happy for the great triumph of River Plate against Platense, which allowed him stay one step away from the title in the Professional League. If the Millionaire wins the classic against Racing Club next Thursday at the Monumental stadium and Talleres de Córdoba does not do the same against Gimnasia and Esgrima La Plata, he will be able to shout champion with three dates to go, thus erasing the only pending asterisk in matter of local titles.

But on the other hand, he acknowledged that he was angry for not having been able to close the game before, especially in the great first time disputed. Nor did he hide his pain and concern for the hard injury of Enzo Pérez, whom he will lose for the remainder of the season.

Nevertheless, the most tense part of the press conference took place almost towards the end when a journalist asked him about the rumors that bring him closer to the Uruguayan team, who has just fired Óscar Tabárez. According to the press of that country, the Doll is the main candidate to succeed the Master and in the next few days there would be a communication with the representative of the current River Plate coach. “I’m not going to make any kind of comment,” Marcelo Gallardo just responded with a stern gesture.

Enzo Pérez’s injury: “We will have to wait for the results and for the doctors to evaluate the studies. It is an elbow dislocation and the rest of the year is over. Bad luck. It’s the second episode we have, last time with Pinola and today with Enzo. Unfortunately things continue to happen, you have to be calm and think about your recovery ”.

His analysis of the victory against Platense: “I think the balance was good or very good in the first stage. We were a very good team with very good ball circulation, we found spaces with mobility, we scored the goal and we should have closed the game. I think the first half was very good but we fell short in the result and that made it possible for Platense with momentum and the drive of his people, plus the long balls, could complicate us. We had chances and we couldn’t close it ”.

“In the second half it was not the same and it is because it is difficult to maintain it. I was left with that anger that with another goal we were able to close it with greater tranquility. We also take three important points. You have to know how to win these games when they appear like this ”.

The high level of Enzo Fernández: “I found in him a very functional player, who quickly adapted to our work time and what I wanted from the game. In this second part (ndr: he was on loan at Defesa y Justicia) he began to feel better and that gave me a more and more important variant within the role played by midfielders, who are of good technical quality and dynamics ”.

The chilling injury of Enzo Pérez that took him out of the match against Platense: his disconsolate crying on the River Plate bench

What does River Plate need to be champion of the Professional League: this is the table, the entrance to the Cups and the next dates

War in the Di Zeo family: what is behind the brutal attack on Rafa’s sister-in-law and niece in La Bombonera