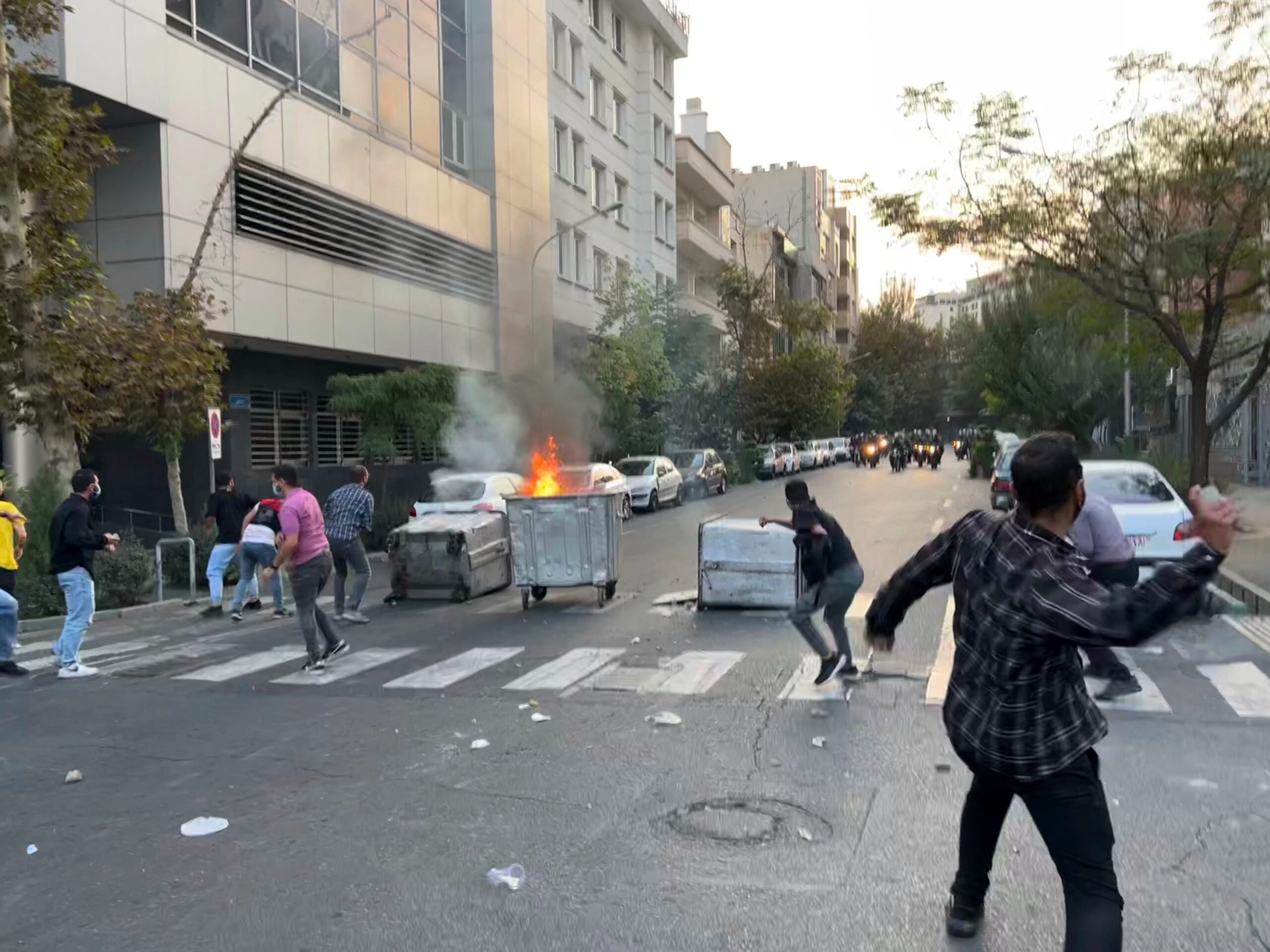 Protests have erupted across Iran in recent days after a 22-year-old woman was killed while being held by morality police for violating the country’s strict Islamic dress code.

The death of Mahsa Aminiwho had been detained for her allegedly loose headscarf, or hijab, has triggered daring displays of defiance in the face of beatings and possible arrest.

Many Iranians, particularly young people, have come to see Amini’s death as part of the Islamic Republic’s crackdown on dissent and the morality police’s increasingly violent treatment of young women.

In the street protests, some women ripped off their mandatory headscarves and demonstratively twirled them in the air. Online videos showed two women throwing their hijabs into a bonfire. Another woman is seen cutting her hair in protest.

In some of the demonstrations, protesters clashed with police and thick clouds of tear gas were seen in the capital Tehran. The protesters were also persecuted Y beaten with clubs by Basij motorcyclists.

The Basij, volunteers for Iran’s paramilitary Revolutionary Guards, have violently repressed protests in the past, including over water rights and the ailing country’s economy.

Yet some protesters still chant “death to the dictator”targeting both Supreme Leader Ayatollah Ali Khamenei and the Iranian theocracy, despite the threat of arrest, imprisonment and even the possibility of a death sentence.

Iran’s morality police arrested Amini on September 13 in Tehran, where he was visiting from his hometown in the country’s western Kurdish region. She collapsed at a police station and died three days later.

She was arrested by the police for wearing her hijab too loosely.. Iran requires women to wear the headscarf in a way that completely covers their hair when in public. Only Afghanistan under Taliban rule now actively enforces a similar law. Ultra-conservative Saudi Arabia has scaled back its application in recent years.

Police deny Amini was mistreated and say she died of a heart attack. President Ebrahim Raisi, who will speak at the UN General Assembly on Wednesday, has promised an investigation.

Amini’s family say she had no history of heart problems and they were prevented from seeing her body before she was buried. Demonstrations erupted after her funeral in the Kurdish city of Saqez on Saturday and quickly spread to other parts of the country, including Tehran.

Iranian women have full access to education, work outside the home and hold public office. But they are required to dress modestly in public, including wearing the hijab and long, flowing robes. Single men and women are prohibited from mixing.

The rules, dating back to the days after the 1979 Islamic Revolution, are enforced by morality police. The force, officially known as the Guidance Patrol, is stationed in public areas. It is made up of both men and women.

Enforcement softened under former President Hassan Rouhani, a relative moderate who at one point accused the morality police of being too aggressive. In 2017, the force chief said he would no longer arrest women for dress code violations.

But under Raisi, a hardliner elected last year, morality police seem to have been unleashed. The UN human rights office says young women have been slapped, beaten with batons and pushed into police vehicles in recent months.

Iranian leaders have vowed to investigate the circumstances of Amini’s death while accusing unnamed foreign countries and exiled opposition groups of using it as a pretext to foment unrest. That has been a common pattern during protests in recent years.

Iran’s ruling clerics see the United States as a threat to the Islamic Republic and believe that adopting Western ways undermines society. Khamenei himself has seized on the so-called “colored” protests in Europe and elsewhere as foreign interventions, and not as people demonstrating for more rights.

Tensions have been especially high since then-President Donald Trump withdrew from the 2015 nuclear deal with Iran and imposed crippling sanctions. The Biden administration has been working with European allies for the past two years to revive the deal. Negotiations appear deadlocked as non-proliferation experts warn that Iran has enough highly enriched uranium for a nuclear bomb if it decides to build one. The Islamic Republic insists that its program is peaceful.

Tehran’s governor said on Wednesday that authorities arrested three foreign citizens in the protests in the capital, without giving further details. Iranian security forces have arrested at least 25 peopleand the governor of Kurdistan province says three people have been killed by armed groups in unrest related to the protests, without elaborating.

Activists and human rights groups have blamed Iranian security forces for killing protesters at other demonstrations, such as those over gasoline prices in 2019.

Iran’s ruling clerics have weathered several waves of protests dating back decades and finally put them down with brute force.

The most serious challenge to clerical rule was the Green Movement that emerged after the country’s disputed presidential election in 2009 and called for far-reaching reforms; Millions of Iranians took to the streets.

The authorities responded with a brutal crackdown, with the Revolutionary Guards and Basij militia opening fire on protesters and launching waves of arrests. Opposition leaders were placed under house arrest.

Among those killed was Neda Agha Soltan, a 27-year-old woman who became an icon of the protest movement after she was shot and bled to death in a video seen by millions on social media.