Ricciardo’s car being towed away

A moment of drama was experienced in the Formula 1 Italian Grand Prix in the neutralization when the crane entered to remove the McLaren from Daniel Ricciardo who left due to a mechanical failure. It is that instead of putting a red flag, the entry of the safety car allowed the cars to continue on the track and some quickly passed the place where the Australian’s car was left. One of them passed very close, it could have been a similar incident like the one that cost his life. Jules Bianchi.

On lap 47 Ricciardo stopped in the opposite area of ​​the mythical Italian circuit that turned 100 years old. It was in a place where the escape route is reduced and the first exit to remove cars is several meters behind, which made it impossible for track attendants to remove the McLaren.

The race was cautioned and it took four laps for a tow truck to appear on the scene, but instead of red-flagging, the stewards decided to uphold the caution. It was at that moment that the aerial image captured the removal of Ricciardo’s car and several cars passed by and after exiting the previous corner they arrived at medium speed.

The best alternatives of the Italian Grand Prix

Although there were in an instant the hearts stopped and that was when a Williams headed to the right and if he did not reduce his speed, he might have hit the crane, which was going backwards. Something similar happened with Bianchi’s crash at the 2014 Japanese Grand Prix, when the race was also neutralized to get the Sauber out of Adrian Subtlebut a flaw in the Marussia prevented him from turning the ill-fated Frenchman, who collided with the crane. In July 2015, after nine months in a coma, Bianchi passed away..

It is possible that the stewards thought that the retirement of Ricciardo’s car was going to be quicker and, by red-flagging, the cars were going to have to pit and then re-grille to resume the final laps. But the situation warranted that alternative in the face of Bianchi’s background.

Luckily there was no incident to regret, but then another issue came that caused anger in the fans. The McLaren’s retirement took longer than expected and the caution continued to the point where the race was finished with the safety car on track. It was a heresy in the “Temple of Speed”, as Monza is known, where a hand-to-hand definition could not be seen between Max Verstappen (Red Bull) and charles leclerc (Ferrari).

Although the issue is regulatory, the International Automobile Federation (FIA) should change the rule to allow at least one extra speed lap after a neutralization. This led to a wave of criticism from fans on social networks and the topic was a trend.

After the competition Ricciardo indicated that “I’m a little sad. I entered the curve and the car did not enter the change. I went to the inner part and I could not see a place of help. It was a shame for the end of the race.”

The victory corresponded to Verstappen who established himself at the top of the championship and with six dates left he is heading for the two-time world championship. He adds 335 points and leads Leclerc by 116 when there is 156 left in dispute.

This Sunday’s was the last race in Europe and the calendar will enter its new Asian foray, with two returns: on October 2 it will be run in Singapore and on the 9th, in Japan, at the emblematic Suzuka Autodrome.

MEMES BY THE SAFETY CAR IN MONZA 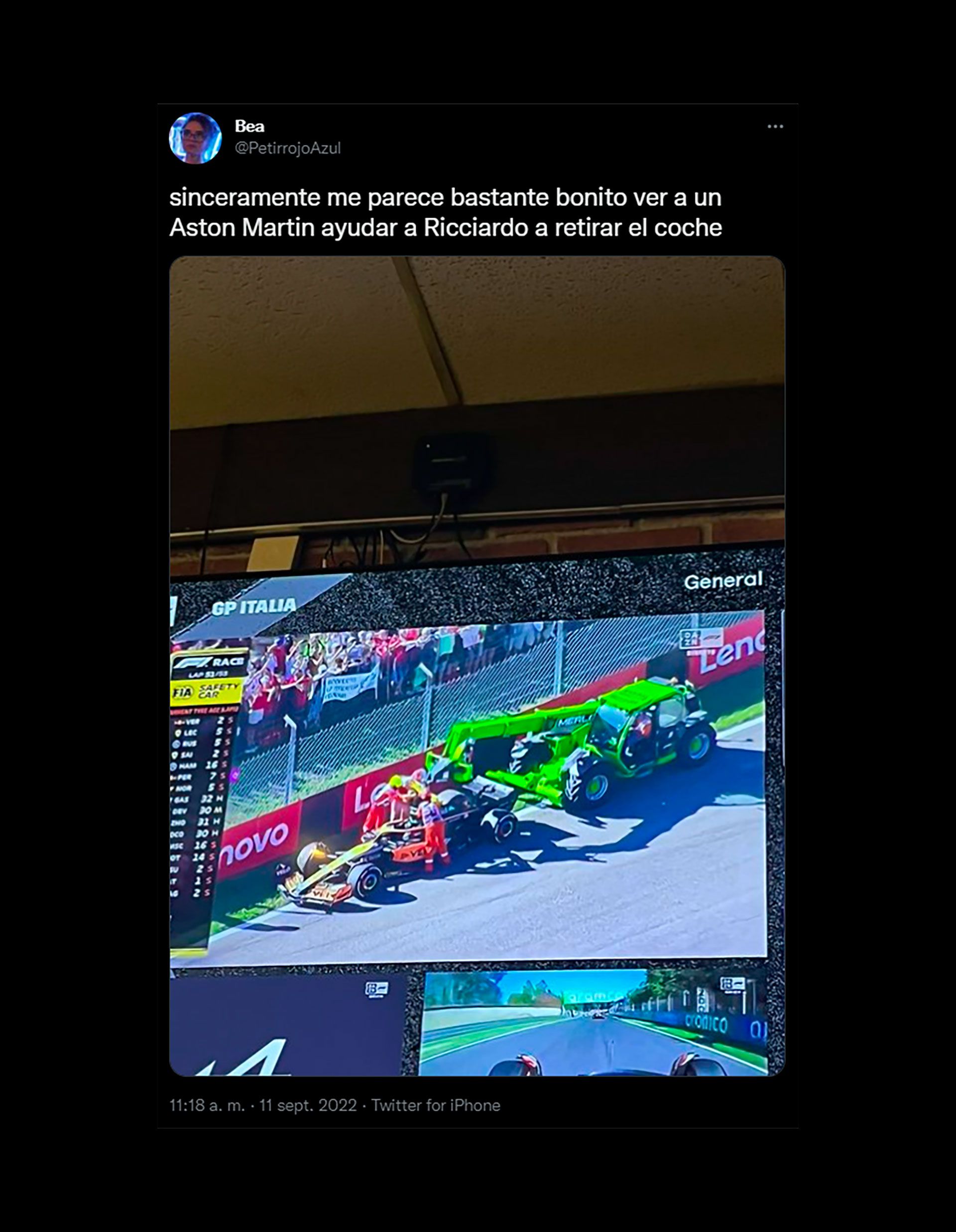 Hannah Schmitz, from intern to boss: the brain of Red Bull’s success who generates love and hate in Formula 1

Franco Colapinto won the Formula 3 sprint race at Monza: the maneuver on the last lap to defend his second victory of the year