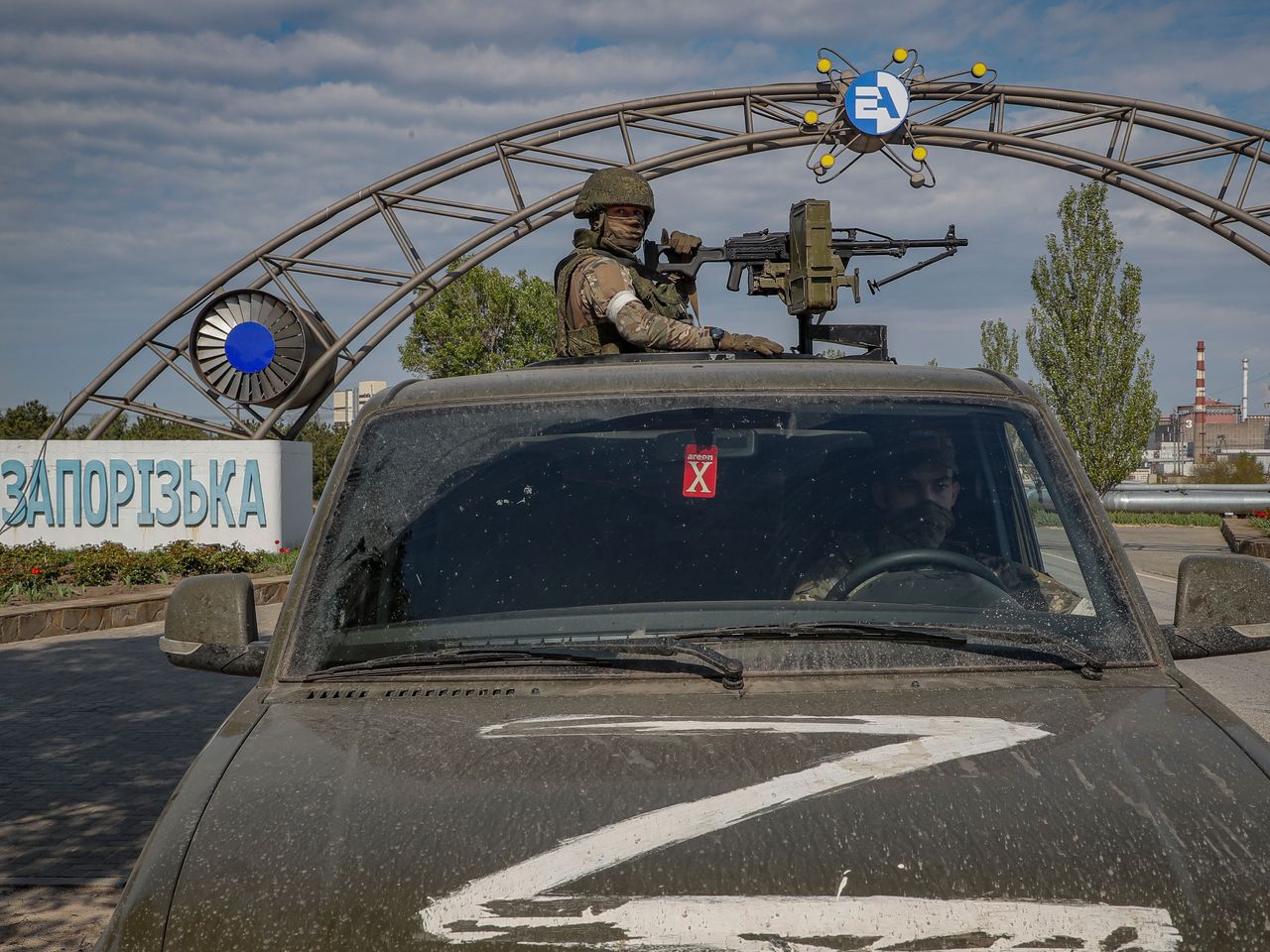 Russia converted the Zaporizhzhia nuclear power plant, the largest in Eastern Europe, into a time bomb. At the facilities of the nuclear power plant located on the outskirts of the occupied city of Enerhodar, in southern Ukraine, was taken on March 4 by a contingent of more than 500 Russian National Guard soldiers. They deployed heavy artillery batteries on the ground and laid anti-personnel mines along the banks of the Dnipro River reservoir whose water cools its six reactors. The Ukrainian army maintains control of the towns on the opposite bank, some 5 kilometers away, but was unable to launch a counteroffensive due to the danger posed by artillery battles around the six active nuclear reactors.

Despite warnings from nuclear safety watchdogs earlier this week the russian army continues to launch missiles from there. The Ukrainian-controlled city of Nikopol, across the river, was hit by Grad rockets that damaged 11 apartment buildings and 36 private houses, injuring three people, according to the Ukrainian military. The assault also disrupted electricity, water and natural gas supplies in the city, where residents flee en masse from artillery strikes and the associated radiation risk.

Both sides accuse each other of having started the attacks in the area in recent days. The G-7, the group of the world’s richest countries, called for the immediate evacuation of the area and the Secretary General of the UN, the Portuguese Antonio Guterres, said that the situation was very close to “reaching a disaster”. Ukraine also accused the Russians of causing explosions at the plant with intended to unsettle European allies about nuclear security and discourage arms deliveries to Ukraine.

Argentine Rafael Grossi, head of the United Nations nuclear watchdog, the IEA, said that “all the principles of nuclear safety have been violated” and defined conditions at the plant as “out of control.” He added that he was much more worried about Zaporizhzhia than about Chernobyl, the site of the 1986 nuclear catastrophe, also in Ukraine, which contaminated hundreds of kilometers around and endangered Europe. “In Chernobyl, I think we are fine. It is controlled by Ukrainian technicians and they know how to do it,” explained Grossi from Vienna, where the international organization is based. He clarified that his agency regularly inspects that plant and restored the sensors for radiation control and other detection devices. But the IEA cannot access key parts of Zaporizhzhia’s reactors, as the Russian occupation force and surrounding bombardment make it too dangerous for inspectors.

In a statement issued on Friday, the Ukrainian state nuclear company, Energoatom, reported that Russian soldiers keep the basements of the plant occupied and prevent employees from taking refuge in them, despite the risk of fighting in the area. Blocking access to shelters adds to other psychological stresses for Ukrainian workers in the reactor control room, who they were subjected to harsh interrogations that included torture with electric shocks, according to reports from various Ukrainian officials at the plant. The Wall Street Journal reported that nuclear engineer Serhyi Shvets had been killed on suspicion of passing information about what was happening. Several other technicians who had refused to collaborate with the occupants also disappeared. “If this information is confirmed, it is not only alarming because of the fate of the plant employees, but also because greatly increases the chance of accidents due to human error”, said the IEA.

Two women workers at the plant interviewed by the BBC said that are constantly being watched. They can only use cell phones connected to the Russian network that is monitored by Moscow’s intelligence services. The soldiers patrol all the time and intimidate the women. This week a missile fell on the oxygen-nitrogen processing plant and it did not explode because the workers managed to control the fire at the cost of their own integrity. And that the worst thing for them is to pass the security area of ​​the plant when they go home in the late afternoon. that’s where workers disappear without anyone knowing about them.

On Thursday, attacks took place that destroyed high-voltage electrical cables that feed the plant, which forced to reduce production in one of the six reactors. Two other reactors were already shut down and a third was undergoing routine maintenance. Shortly after, a second series of explosions damaged a company office building located within the same complex. The Ukrainian state-owned company that operates the plant said Russia staged the explosions; the Russian army assured that the attacks came from the Ukrainian side.

According to The Insider, the independent Russian news site, Russian forces they mined the plant and placed Grad rocket batteries near the village of Vodyane, about four kilometers from the reactors. For its part, the Ukrainian state-owned company Energoatom showed photos on social networks of the entry of 14 heavy artillery vehicles at the plant and said they are using the engine room near the first reactor as a store for explosives, ammunition and weapons. The entire garrison arsenal is currently stationed near the main reactor tank, which contains the flammable oil that cools the steam turbine, according to Energoatom.

Dmytro Orlov, a former mayor of Enerhodar who is still in that city in hiding, told the Kyiv Independent that Russian soldiers kept several armored vehicles loaded with explosives in an engine room of the No. 1 reactor and that they placed artillery rocket launchers between the reactor buildings.

President Volodymyr Zelensky described the situation as a “brazen crime”. “The occupants created another extremely dangerous situation for everyone in Europe,” Zelensky said in one of his regular late-night messages, citing the explosions at the plant. “This is the largest nuclear power plant on our continent. And any bombing of this facility is an open and brazen crime, an act of terror.” His top energy adviser, Mykhailo Podolyak, went further in a Twitter post last Saturday: “This morning in Europe is possible only because the Zaporizhzhia nuclear power plant did not miraculously explode yesterday.”

John Erath, director of the Center for Arms Control and Non-Proliferation, told the specialized site The Grid that according to confidential reports to which he had had access, the situation is as follows: “The lack of spare parts, the Faulty maintenance and outage of standby outside power lead to loss of cooling capacity, which can culminate in fuel meltdown inside a superheated reactor or spent fuel rod cooling pools, a scenario similar to that of the disaster at the Japanese Fukushima plant in 2011″.

An open war on the site, where the explosions would destroy the containment and cooling systems of the reactors, would create a disaster far worse even than Fukushima, according to Greenpeace. Modern reactors, covered in a shell of steel and hardened concrete, are designed to withstand air attacks, according to Grid, but not surface-to-surface missiles. Even spent fuel would send radioactive particles hundreds of kilometers from the reactor site through southern Ukraine and Russia, and later to Romania and Bulgaria.

According to the Kyiv government, Russia also has its eyes on the electricity produced at the plant.. It is known that a group of Russian military engineers was working in the area to determine the feasibility of modifying the power lines and carry the fluid to the occupied Crimean peninsula and other Russian territories. Energoatom said Moscow is aiming “destroy the station infrastructure and damage the entire power transmission” to cut off electricity in southern Ukraine. About half of Ukraine’s electricity comes from nuclear power, and the massive 5.7-megawatt plant is the largest in the country, providing enough power for some 4 million homes. Before the full-scale invasion of Russia, the plant produced a fifth of Ukraine’s electricity and nearly half of the power generated by the country’s nuclear facilities.

The global scientific community is on high alert for the situation in Zaporizhizhia. More than a reactor core explosion, experts are concerned about damage to systems that cool the spent fuel pool and reactors. If cooling fails, it would lead to uncontrolled heat build-up, meltdown and fire that could release and spread radiation from containment structures. The very high temperatures and the scarce rains that are being registered at this moment in all of Europe due to climate change could provide the other element for the “perfect storm”. Some believe that the radiation would spread slowly for thousands of kilometers around without any wind or rain being able to dilute it. In two or three days the radioactive cloud could reach Bucharest, Warsaw or even Berlin.

The Zaporizhzhia nuclear power plant contains 1,200 tons of radioactive fuel that could cause a catastrophe in Ukraine and Russia