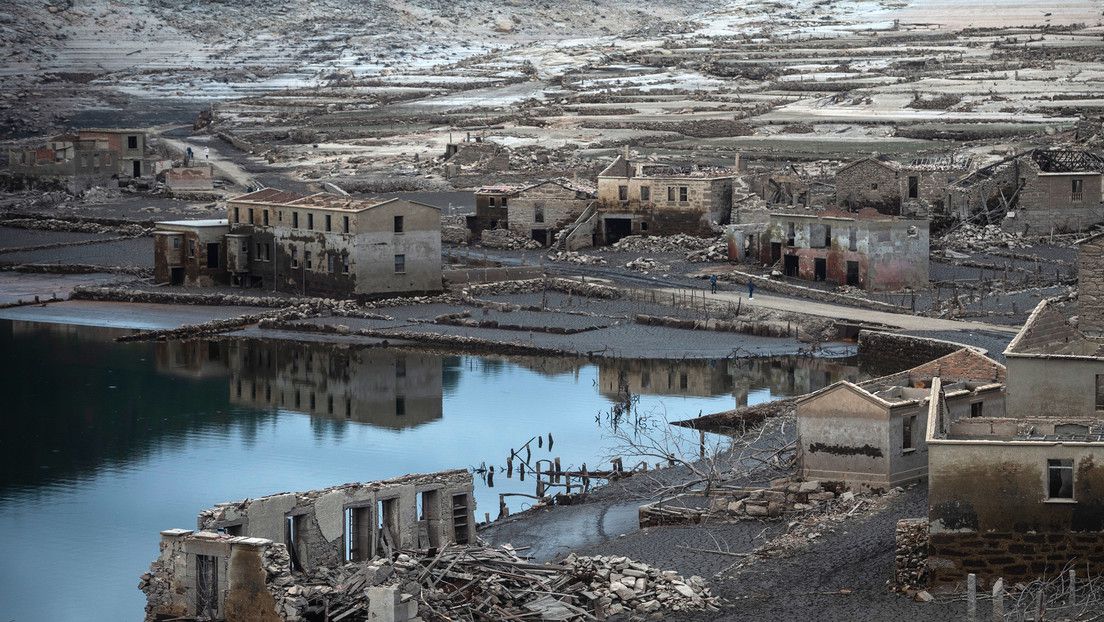 The province of Ourense has a submerged treasure, that of Aceredo, an old town located in the municipality of Lobios that in the nineties it was buried under the waters and every year it re-emerges, to the fascination of locals and visitors.

Plato recounted in his famous ‘Dialogues of Timaeus and Critias’ that thousands of years ago there had been an extensive island in the middle of the ocean, called Atlantis, which finally sank. And it said that, despite never having been located, it had been the subject of innumerable investigations.

As well, In Galicia there is another, but this one, very occasionally, appears.

As in so many other places, the construction of a reservoir, that of Lindoso (Portugal), in 1992, swallowed up several villages, in the midst of a revolt, of strong local opposition.

A) YesIn addition to Aceredo, four other towns were swallowed up in this Galician area: A Reloeira, Buscalque, O Bao, and Lantemil.

The international agreement, signed in 1968 by Franco and Salazar and already dating from the 1920s for the use of border rivers, marked the end for these nuclei.

These days, coinciding with the low flow, It is possible to see part of the houses of Aceredo, which continue as before, although in the water.

Nearby, the old town fountain and the remains of a street that gave life to a place that came to have 70 houses and about 120 neighbors, and all this, today, in the middle of an almost ghostly landscape.

After three decades, the inhabitants remember perfectly that day in which they were forced to leave their entire lives behind: houses, granaries, orchards, as well as the cemetery.

The Church was saved. And the bodies of the deceased were also unearthed. Now, some families live in the nearby towns, next to the N-540 highway, while others chose to leave.

Francisco Villalonga, a native of Catalonia and a neighbor of the old village of Aceredo, was one of the residents who once took his camera and started recording, knowing that the place was going to be swallowed up.

In his memory will remain forever that January 8, 1992, when the Portuguese hydroelectric plant EDP closed its floodgates and the river, which carried a lot of water due to the rains, began to flood everything.

Aware of the situation, in recent years, other residents of the area and he himself began to record the entire process, that of a landscape that no longer exists and that was drowned forever.

Although the majority, at that time, had already left their houses, in Buscalque the water came to catch several neighbors by surprise and “There were people who were unable to leave” to the point that the Civil Government had to intervene so that the neighbors could leave their homes.

It happened that some had entrenched themselves, Villalonga explained to EFE, either because they did not believe that the water would finally arrive or because they were reluctant to leave behind the inheritance of their ancestors.

The inevitable arrived: “They took things out at night as best they could, they left, it was a coming and going of cars”, Villalonga abounds.

Even today, this neighbor believes that the money has not compensated for the loss of roots that still leave “painful” memories in his case.

“Your turn. It takes you to memories of childhood, of the family “says Villalonga, who believes that the company closed the negotiation in a “deceptive” way, under threats to the elderly of forced expropriation.

“They came to the houses at night, they threatened us to sell. The older ones, who were afraid, sold. But others we did not want ”, relates Margarita de Brito, one of Buscalque’s neighbors who refused to sell.

In fact, some time later they learned that the people who negotiated with them were nothing more than intermediaries for the Portuguese company and that they tried to do business.

The construction sparked loud protests, which were mainly led by women. There were police charges and concentrations and they also went on a hunger strike “For ten days.”

The riot squads were mobilized.

“We went to all the towns to make force so that they did not draw up the minutes. But they took out the truncheons and some neighbors were injured ”, continues De Brito.

Be that as it may, the neighbors had to leave their homes for good.

“At the end the water came, the first day a little, the second a little more and, on the third day, it rose and did not fall more”, relates this woman.

Of course, for the sales they took millionaire compensation with which they could start a new life, some in nearby towns and others in other locations.

The story, which is part of the memory of this area, reached the audiovisual format.

The documentary entitled ‘Os dias afogados’, by César Souto and Luis Avilés (2015), narrates the sinking, based on home recordings. A work that will remain forever in the memory of the inhabitants.

* With information from EFE

Drought resurfaces in Iraq a town that was submerged under water

The case of ammunition submerged in Swiss lakes floats in Geneva