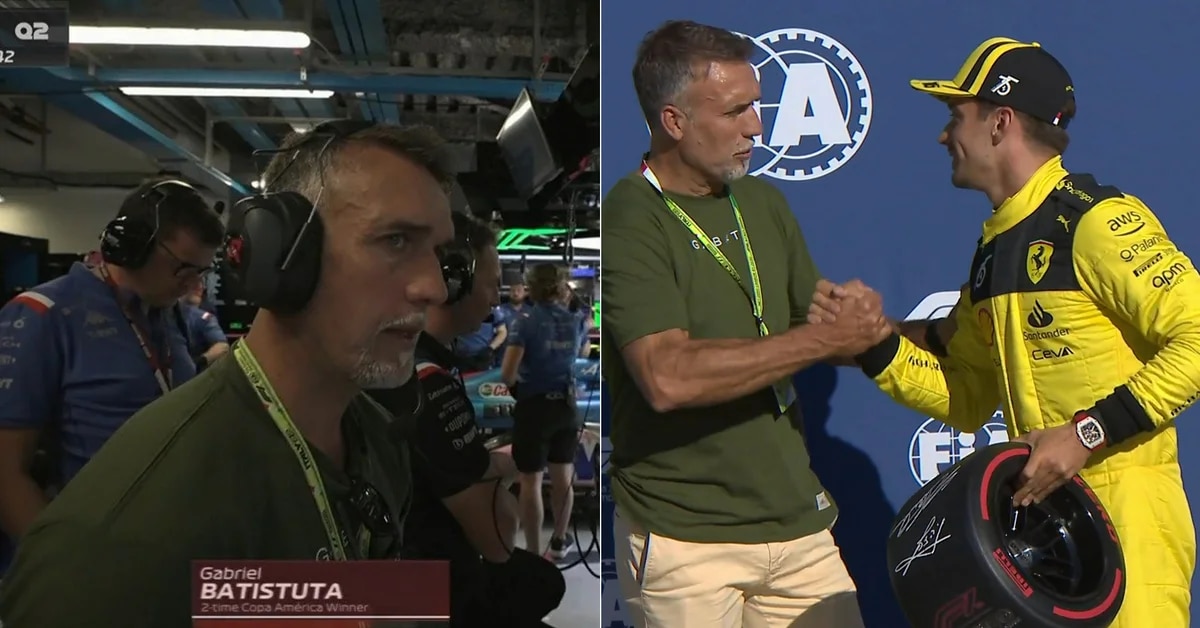 * Gabriel Batistuta gave him the award for the fastest in the classification, Charles Leclerc

The Italian Grand Prix It will be presented as another great battle between Max Verstappen and Charles Leclerc, the leaders of Red Bull and Ferrari who have been disputing the first places since the beginning of the season, even though the Dutchman took a greater advantage in the last half. Looking ahead to this Sunday’s race at the mythical Monza circuit, the Monegasque honored the nationality of his team and took the first step towards victory as a local: was the fastest in qualifying.

The detail in this qualy is that the tire usually awarded to the fastest driver It was delivered by the former Argentine soccer player Gabriel Omar Batistutawho occupied a space that throughout the 22 dates of the calendar is reserved for great figures from different environments.

One of the top scorers in the history of the Argentine national team recognized himself as a fan of Formula 1: “We are here enjoying ourselves, the truth is that the atmosphere is spectacular. I’m in Italy, where people love me a lot, so I feel half at home too. Besides, today I have to give the prize to the one who wins the classification, I’m a little nervous, ”he declared in the preview of the competition, minutes before sit in the pits at Alpine to closely follow all the qualy.

The fight to start from the first place was on the tracks in this case, but also on the desks since almost half of the runners suffered sanctions of various kinds for various reasons. In that case, for example, Max Verstappen He set the second fastest time but will start from further back due to the penalty.

In this way, Leclerc is seconded by George Russell of Mercedes. lando norris Y Verstappen will be third and fourth respectively. The other first ten places will be owned by Daniel Ricciardo, Pierre Gasley, Fernando Alonso, Nyck de Vries (replaced Alex Albon at the last minute due to a health problem), Guanyu Zhou Y Sergio Perez.

* Batistuta lived the Qualy from the Alpine box

“I love Formula 1It’s not that I just like it. I follow tests, classification, I follow everything, I have a simulator at home. I have tested several cars, in some I have done damage, but I always liked it. In Italy, when I was here, I had a couple of go-karts too that I used when I had the day off.. So it served to free me from the head. I always liked it, I downloaded a lot on the circuits, ”Batistuta acknowledged that a few days ago he had also visited the Serbian tennis player Novak Djokovic and played a friendly in Monza with his former teammate Francesco Totti and other soccer stars.

The former Fiorentina and Roma footballer declared himself a Ferrari fan, although he acknowledged: “We’ve been making some strategic mistakes lately that are costing us the championship. But it is Formula 1, everything is played on details and this year the Ferraris are not doing very well.

THE BEST ACTIONS OF THE RANKING