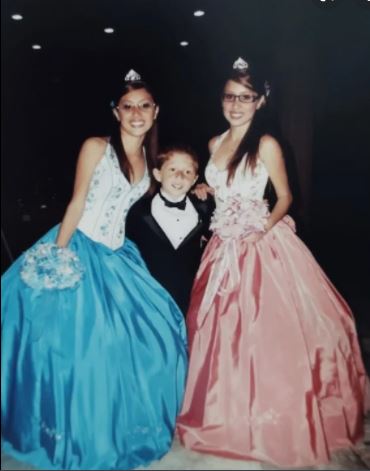 This time his sister Bertha posted a series of images when Octavio had barely 10 years and he was chamberlain of both her and her other sister when they met 15 years.

In the images, Ocaña wears an elegant smoking and proudly leads his older sisters by the hand, who shared the dance floor with him and today mourn his sudden departure wrapped in doubts.

“Octavio was 10 years old and we were turning 15. I still remember that we did not want to have chambelanes because we knew that the best chamberlain we had it at home and it was him, without a doubt he loved the idea and promised to be the best chamberlain, (notice in the photos) we rehearsed a lot to achieve it and everything turned out beautiful and perfect that special day ”, it reads at the beginning of the message.

Bertha remembered the angel she had from Octavio and confessed that both she and her family feel grateful for having had and enjoyed it in their lives.

“The photos speak for themselves today I reopened this album of that special day for the family and there is no doubt that he always it was light, life and his angelHe always gave that special touch to everything, we were very lucky to have you as a brother, your parents were very lucky to have you as a son and although it is hard for us to understand that you are no longer physically you will always be in every moment, in every memory, in every word, in every day lived, the sky is beautiful since you are already part of it ”.

The death of Ocana occurred in the municipality of Cuautitlán Izcalli, when a truck of the Policeman He asked the actor to stop his vehicle, which sparked a chase that ended with the actor’s vehicle, who was traveling with two other companions, crashing into a wall.

According to State prosecutor’s officel, the actor passed away for the head shot of a weapon that was found inside the vehicle and that was detonated during the chase under still unclear circumstances.

The Mayor of Cuautitlán Izcalli He maintains that the police wanted to stop Ocaña’s vehicle after realizing that he had a weapon inside.

However, a video broadcast on social networks has further contributed to the confusion, as it shows moments after the crash, in which Ocaña appears bleeding and still alive without the police trying to help him.

In statements to different media, the actor’s father, Octavio Pérez, has accused the State of Mexico Police having killed his son and having prepared everything to make his son see his son as guilty and for that reason he requested the intervention of the President.

“I ask you to please give us your hand, because this is not going to stay that way, because that was an outrage what they did,” he said.

Pérez acknowledged that his son carried a weapon to protect himself, however, he specified that the bullet that killed him was not of the same caliber.

Ocaña made his debut at age 7 playing the character of Benito in “Necinos,” an 11-season series produced by Eugenio Derbez and Elías Solorio.