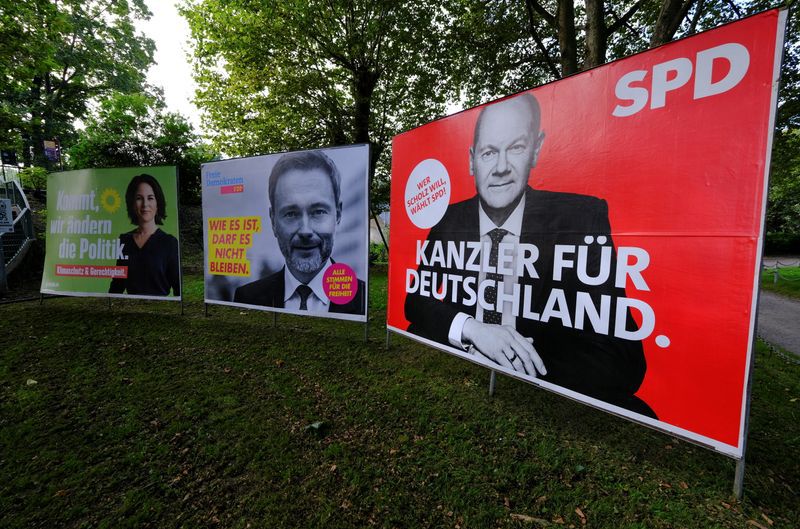 An alliance of parties led by the center-left is set to announce an agreement on Wednesday to form Germany‘s next government. putting the Social Democrats (SPD) in charge for the first time in 16 years.

Two months after the SPD beat Angela Merkel‘s conservative CDU-CSU coalition in a general election, its negotiators put the final touches on the agreement with the Greens and Liberal Free Democrats that will install Finance Minister Olaf Scholz, 63, as chancellor.

The relatively quick deal is likely to be greeted with great relief from international partners who distrust a paralyzed Germany, while the coronavirus pandemic crisis, the migration crisis in Belarus and a weak economic recovery rage.

“On Wednesday, the main round of negotiations of the SPD, the Greens and the FDP will meet for their final session”the parties said in a statement.

“Subsequently, the leaders of the three parties and the candidate for chancellor, Olaf Scholz, will present the coalition agreement negotiated in recent weeks”they added.

With the so-called coalition contract, the parties have essentially established their political roadmap for the next four years.

They have also likely resolved a thorny part of the negotiations: which party assumes which ministry.

The latest leaked lists in the ministry’s distribution show Christian Lindner, leader of the business-friendly FDP, who heads the powerful finance ministry of Europe‘s largest economy.

In addition, Robert Habeck, co-leader of the Green ecologists, is promoted to lead a new ‘superministry’ that groups together the economy, climate protection and energy portfolios.

Annalena Baerbock, the other leader of the Greens, will likely become Germany’s next foreign minister, the first woman in office.

The lineup, if confirmed, hints a Germany that could adopt a more assertive tone vis-à-vis China and Russia, while economically, would likely stick with budgetary rigor while aggressively pushing green investments.

The rapid pace at which the three parties, known in Germany as Ampel or “traffic light” for their colors, came together is a surprise given that the FDP is not a natural partner of the center-left SPD or the Greens.

But the parties are eager to avoid a repeat of complicated negotiations from the last round, when Lindner was vilified for disrupting talks with Merkel’s CDU-CSU and the Greens.

Before the carefully choreographed announcement this time around, the parties displayed extraordinary discipline, preventing details of the conversations from leaking to the press, and thus avoiding the recriminations that accompany the broadcast of dirty laundry to the public.

Merkel, known for her steady hand in leading Germany through the eurozone crisis, the influx of immigrants and Brexit, is on her way to political retirement after more than 16 years in office.

Aware of the value placed on a stable Germany, the veteran politician has endeavored to ensure an orderly transition.

Emphasizing continuity, he included Scholz in key bilateral meetings during the G20 summit in Rome in October, including with US President Joe Biden.

When he met with regional leaders from Germany’s 16 states for urgent talks last week about the pandemic, Scholz was also prominently present.

He has also ignored the fact that Scholz comes from a rival political party.

When asked by the Sueddeutsche newspaper how she felt about a Social Democrat returning to power soon, Merkel was optimistic: “There will be political differences, of course. But I will be able to sleep soundly. “

Merkel’s vote of confidence aside, Scholz is a seasoned hand, having served as Labor Minister in her first coalition from 2007 to 2009 before taking over as Vice Chancellor and Finance Minister in 2015.

Known for being meticulous, confident and fiercely ambitious, he has cemented his reputation as a fiscal conservative, something that sometimes puts him at odds with his workers’ party.

However, a calm demeanor has helped him weather turbulent times, including harsh criticism in recent weeks for his relative silence as a leader-in-waiting as the pandemic dramatically worsens.

After the destruction of a satellite by Russia, Germany requested security measures for space