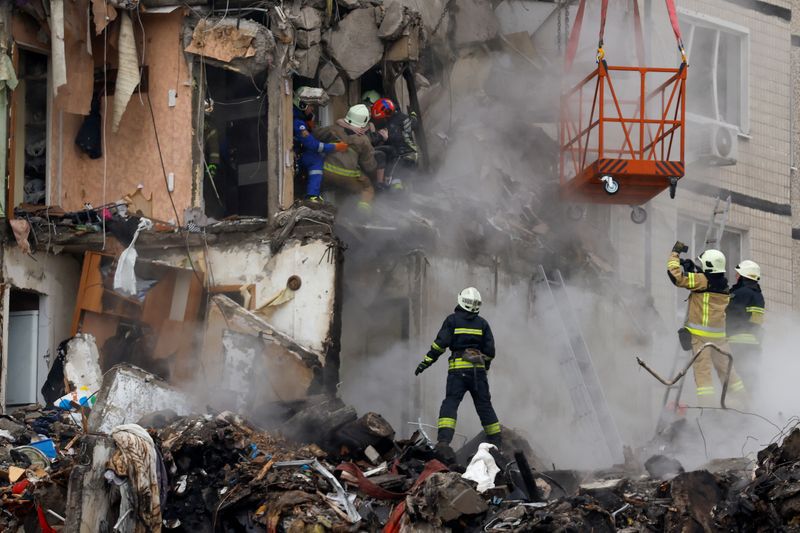 The UN condemned on Monday the Russian attack on a residential building in the Ukrainian city of Dnipro and He asked that it be investigated as a possible war crime and seek to prosecute those responsible.

The organization highlighted that it is one of the deadliest attacks since Russia invaded the neighboring country last February, with at least 40 fatalities, 46 missing and 75 injured.

the spokeswoman Stephanie Tremblay indicated that the Secretary General, Antonio Guterrescondemns the attack as “another example of an alleged violation of the rules of war” and that the humanitarian coordinator in Ukraine, Denise Browncalls for an “effective investigation” on suspicion of war crimes and an “appropriate” prosecution of the suspects.

According to the organization, in addition to the numerous casualties, which are expected to continue to increase as rescue work continues, the attack has left more than a thousand people homeless.

The UN and several of its agencies are providing help to the affected families, with psychosocial assistance, clothing, blankets, hygiene kits, medicines and other basic products, as well as supporting their transfer to temporary homes in the city.

The United Nations also condemned an attack in the city of Kherson that hit the facilities of the Ukrainian Red Cross Society on Sunday, an episode that left no casualties but did cause the loss of important equipment.

“International humanitarian law is clear: humanitarian workers and facilities are protected and constant efforts must be made to save them.”Tremblay noted.

In addition, the UN drew attention to the damage suffered in another attack on a hospital in the city and to the fact that several houses, three schools and two kindergartens were damaged yesterday in the Dnipro region.

In eastern Ukraine, the situation remains “critical”, the spokeswoman said, with numerous civilians killed and injured on both sides of the front lines, including in areas under Russian control.

Sources from the State Emergency Service reported on Monday that the fatalities from the launch of a Russian missile against the residential building in the town of Dnipro rise to 40, including three children, while 46 people remain missing after the attackwhich has caused 75 injuries.

A total of 39 people were brought to safety, including six minors, during the search and rescue operations, while the psychologists from the emergency service have provided assistance to 98 victims and the municipal services have removed more than 8,000 tons. debris and 41 damaged vehicles.

In the Russian attack launched during the afternoon of last Saturday against this city of a million inhabitants located in the center of Ukraine, a residential building was hit by a Raduga KH-22 long-range missiledesigned to be used against aircraft carriers and their escort flotilla and which can carry both conventional and nuclear warheads.

The Dnipro authorities declared three days of mourning for the victims of this missile, which destroyed a total of 72 apartments corresponding to two blocks of stairs and damaged more than 230 homes.

The building has 18 entrances, with 36 homes in each one, and the total number of residents of the property was 1,100.

The UN reported that more than 7,000 civilians have been killed since the start of Russia’s invasion of Ukraine.

After the massacre in Dnipro, Ukraine denounced new attacks by Russian troops in Zaporizhzhia