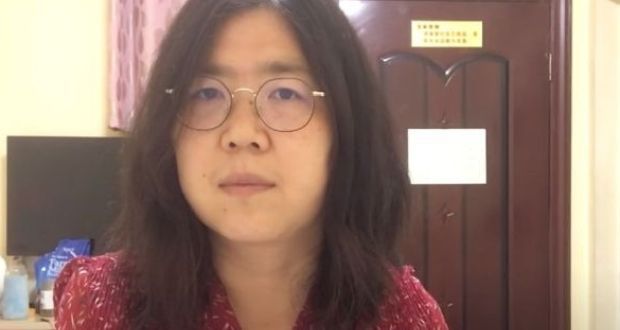 The Chinese Citizen Journalist Zhang Zhan, imprisoned after filming the beginnings of the COVID-19 pandemic in Wuhan, must be “released immediately”Demanded the UN this Friday.

“We urge the Chinese authorities to consider the immediate release of Zhang, albeit for humanitarian reasons., and make available a urgent medical help, respecting their will and dignity ”, declared the spokesperson for the UN High Commissioner for Human Rights, Marta Hurtado.

Zhang, 38, is on hunger strike after being sentenced, at the end of 2020, to four years in prison for “provoking disturbances of public order”, a commonly used charge in China against political opponents.

“The free flow of solid information is especially important at the beginning of crisis situations such as health emergencies“Hurtado stressed, highlighting his”worry”About Zhang’s health.

In February 2020, former Shanghai lawyer visited Wuhan, central China, to report on the situation there shortly after the metropolis of 11 million people was quarantined.

His images of patients in bed in the corridor of a saturated hospital gave an account of the sanitary conditions of the city, prey to the coronavirus.

Now, he has lost a lot of weight and “I might not live long”, As his brother tweeted a few weeks ago, Zhang Ju. “I may not get over winter”, He warned.

Besides Zhang Zhan, at least three other independent journalists, Chen Qiushi, Fang Bin and Li Zehua, were detained having covered the epidemic crisis in Wuhan.

China harshly judged this Saturday the request of the United Nations Organization to release the journalist.

The Chinese mission in Geneva expressed outrage at the comments “irresponsible” and “wrong”Made by the Office of the United Nations High Commissioner for Human Rights (OHCHR) about the communicator.

Days ago, Zhan was nominated for a Reporters Without Borders award for press freedom (RSF) for his bravery, amid growing demands for his release.

In his nomination, RSF said Zhang had resisted “constant threats from the authorities” to broadcast his video reports live from the streets and hospitals of Wuhan. and show the harassment to which the families of Covid-19 patients were subjected.

“Widely shared on social media, their reports were one of the main sources of independent information on the health situation in Wuhan at that time “, said.

RSF’s nomination took note of claims made by Zhang’s lawyer in the days after her conviction that she had been chained up in her cell and force-fed. “There is currently great concern that she may be subjected to more torture and ill-treatment”RSF said.

The head of RSF’s East Asia Office, Cédric Alvianihe told the newspaper The Guardian that Zhang was a symbol of journalism in China under increasing government oppression and regulatory restrictions. “Zhang Zhan represents the hope of the Chinese people that some will continue to do journalism”Alviani said. “Let them go where something happens and keep reporting. The Chinese people, like all people on Earth, yearn for information about what is happening around them. “

New wave of COVID in Europe: bullfights and burning cars during a demonstration against restrictions in Rotterdam