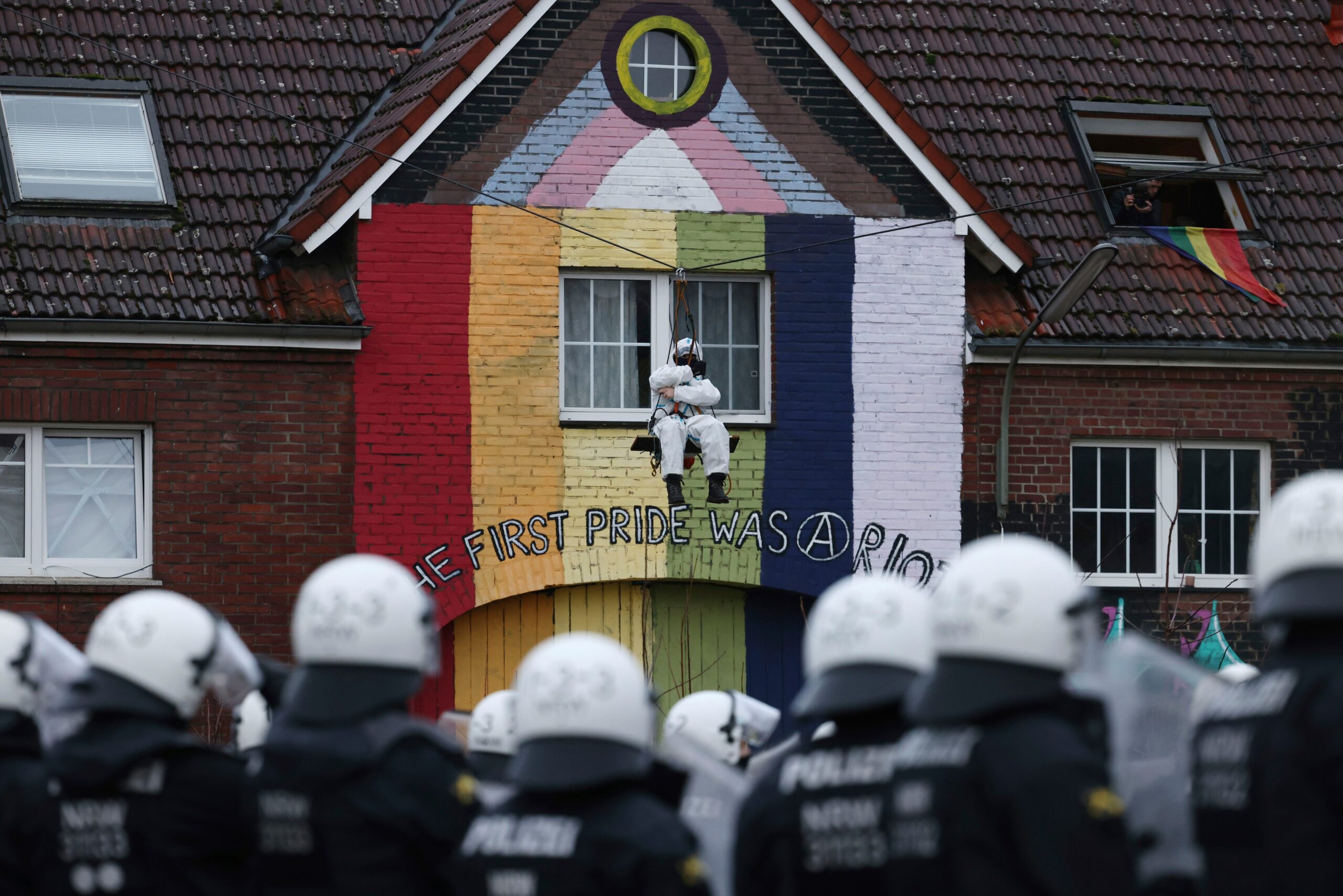 Police stormed an abandoned western town on Wednesday Germany to evict the activists who had taken refuge in it to prevent its demolition with a view to expanding a coal mine.

Riot police officers entered the tiny village of luetzerath, which has become a flashpoint in the debate over the country’s climate efforts. They threw some stones and fireworks at the advancing police, who could be seen dismantling the posts set up by the protesters.

The police announced the start of the operation and the fencing of the area. They said on Twitter that people “currently have the ability to leave the location without further police action.” They said they had found “more stored shells.”

Tens of activists remain camped in the village, some in tree houses, as police slowly remove more barricades near the entrance. Some activists read books or played the accordion perched about 3 meters high on tripods.

A few sat on the roofs of the remaining buildings in luetzerath, one of them waving a rainbow flag. Conditions were wet and muddy.

Environmentalists claim that razing the town to expand the nearby Garzweiler coal mine would cause huge emissions of greenhouse gases.

The government and the electricity company RWE say that coal is necessary to guarantee the Germany’s energy security. The utility RWE struck a deal with the regional government last year allowing the town to be destroyed in exchange for ending coal use by 2030, instead of 2038. The town’s last resident left in 2022 after being forced to sell to RWE.

On Tuesday, the protesters They refused to abide by a judicial sentence that prohibited their access to the area. Some dug trenches, built barricades and climbed on giant tripods to prevent the heavy machines from reaching the village, before the police forcibly drove them back.

the fate of luetzerath has sparked a heated debate in Germany over the continued use of Coal in the country and whether the fight against climate change justify the violation of the law.

Studies indicate that some 110 million metric tons of coal from the subsoil of luetzerath. The Government and RWE affirm that this coal is necessary to guarantee the energy security of Germany, diminished by the cut off of the Russian gas supply due to the war in Ukraine.

Critics counter that burning so much coal would make it much harder for Germany, and the world, to limit global warming to 1.5 degrees Celsius as agreed in the 2015 Paris climate agreement.

Luetzerath “is now the European place of crystallization of the climate movement”, declared Lakshmi Thevasagayamspokesperson for the activist group Lives of Luetzerath. “We oppose RWE going one meter with its excavators, because we know that the coal under Luetzerath is not necessary for energy security: it must stay underground so that we can reach the climate justice”.

“Now we can do something against climate catastrophe, but at some point we won’t be able to anymore,” Thevasagayam said. He stated that there had been “a full escalation” by the police.

The head of the regional branch of the Deutsche Polizeigewerkschaft police union, Erich Rettinghaus, claimed that the police were acting “very carefully” and were giving protesters every chance to demonstrate peacefully. However, he noted that there were concerns about the possibility of trouble as potentially violent protesters from all over Europe had gathered at the site in recent days.

“The protest is a symbolic protest“, said. “The concerns are understandable; climate protection is important, but energy must remain affordable for everyone”, he added, pointing to the commitment that provides for the early end of the use of coal.

The public services company reported in a statement that one of the first measures will be the construction of a 1.5 kilometer fence around the site.

He said that he “appeals to the illegal squatters to respect the Rule of law and peacefully end the illegal occupation of buildings, plants and sites belonging to RWE”.

Stephan Puschhead of the Erkelenz district administration in which the village is located, told a town hall meeting on Tuesday that while he was sympathetic to the protesters’ goals, the time had come to leave Luetzerath.

“They achieved their goal. Now clear the field, ”he said to boos from the room.

Pusch warned protesters that intentionally breaking the law would not help their cause in a country where the violent seizure of power and the horrors of dictatorship are still in living memory.

“You won’t save the world’s climate by yourself,” Pusch said. “(We will only do it) if we manage to take the majority of the population with us.”

Debates about how far the civil disobedience have taken place in Germany and other countries in recent months, amid a wave of roadblocks and other shocking actions by protesters demanding tougher action to combat climate change.

Some activists claim that ultimately the law is on your sideciting a judgment of the supreme court of 2021 that forced the Government to redouble its efforts to reduce emissions. They also point to the legally binding of Germany’s commitments under the Paris Agreement.

After the meeting, the student Jannis Niethammer acknowledged that the dispute over Luetzerath touches on fundamental issues. “It’s a question of democracy and how do we get a democracy to move towards climate protection, towards climate justice,” he said.

Climate crisis: the last 8 years were the warmest on record in the world

Due to climate change, most of the glaciers in the Alps could melt by the year 2100