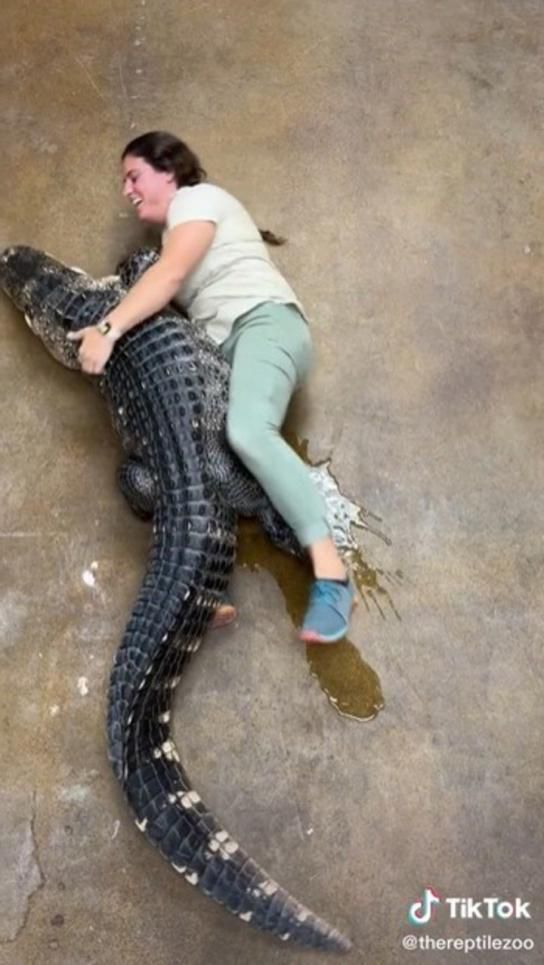 An unusual video recorded the moment when an alligator from 2.7 meters long and 90 kilos of weight embraces a woman in the middle of a quite reckless frenzy of affection.

The images have been released by a reptile zoo in California (USA) and already have more than 7.7 million views on TikTok. Its protagonists are Juliete Brewer, a zookeeper, and Darth Gator, one of the viral stars of the park.

“This is Darth, I have photos of him from all his life, but this time he caught me”, Brewer says in the video. “I tried to hug him and he said ‘no'”. The crocodile is then shown trying to get away from the zookeeper, who asks him “Where are you going?”, while escaping.

The woman later discovers that the reptile had urinated near where she was lying. “Oh my God, what happened”, Brewer says when he sees the puddle the alligator left behind.

The curious video, which has gone viral on TikTok, was shared by the Fountain Valley reptile zoo in California along with the caption: “Sometimes I hug Darth Gator.”

But not everything has been fun, because as is to be expected on social networks, comments are usually divided and there were many who accused the caregiver of being “confident”, “reckless” and even “crazy” who melted into a hug with him. giant alligator.

“I love the passion for animals, but the girl is trusting too much”, someone wrote in a comment. “Everything is fun and games until I rip your face off”, it is read in another.

Brad Vitek was one of the users who commented, stating that what Brewer did was “Too dangerous and for no reason”, while Emma Brown told him “irresponsible”

“When one day you move badly, the animal gets scared and attacks you, the alligator is the one that is going to be killed for that”added the woman.

“That seems incredibly dangerous.” or “In fact, I am terrified for you”, were other comments.

Despite the concerns of Internet users and how dangerous Brewer’s excess of affection with his alligator can be seen, fatal attacks by these animals are very rare, averaging just one death per year in the United States, well below other smaller animals like hornets, wasps and bees that average 56 deaths per year.

According to its official website Fountain Valley Reptile Zoo is an educational and entertainment facility in Orange County that “It is home to reptiles, amphibians and arachnids from around the world.”

Indonesian zoo breeds Komodo dragons to save them from extinction