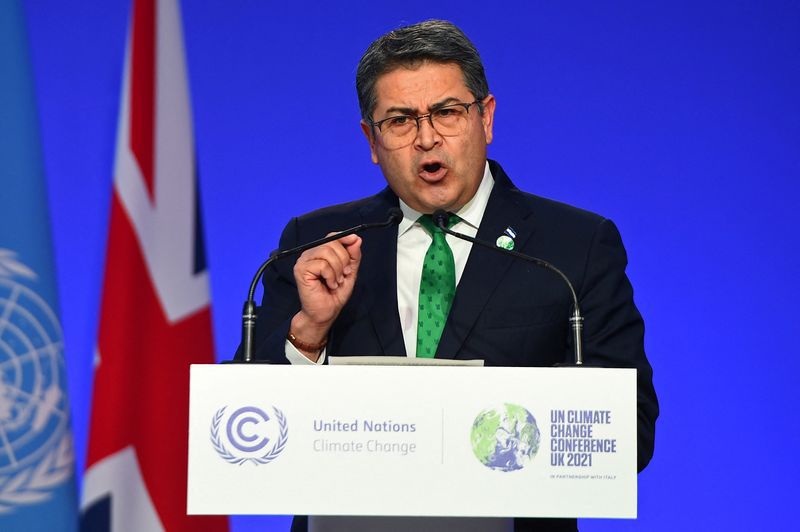 The United States asked Honduras for the extradition of former president Juan Orlando Hernández (2014-2022), who is accused of drug trafficking, while the authorities requested his provisional arrest to start the process.

The information was provided on Monday to the AFP by official sources close to the case, and it became known shortly after The Honduran Foreign Ministry reported on its Twitter account that it sent the Supreme Court “official communication from the US Embassy”formally requesting the provisional arrest of “a Honduran politician,” not named, for the purpose of extradition to the United States.

According to the same sources, Hernández is in Honduran territory. On Monday night, at his residence in the San Ignacio neighborhood of the capital Tegucigalpa, a strong security device was observed.

Meanwhile, the information chain CNN exhibited the document in which the Ministry of Foreign Affairs of Honduras makes to the Supreme Court the “formal request for provisional arrest for the purpose of extradition to the United States of America of Juan Orlando Hernández Alvarado, alias JOH.”

Hernandez’s lawyer, Hermes Ramírez denounced in the news TN5 that his client was being subjected to “attacks” as his home was surrounded by a police cordon, which prevented the access of his advisers and the state commissioner for Human Rights.

He explained that he had not been notified of the arrest warrant, nor had “a natural judge been appointed” to carry out the extradition process, as is usual in this type of case, he claimed.

As he knew the AFPThe Supreme Court urgently summoned the magistrates for Tuesday for “the appointment of the natural judge” who will take charge of the case.

On February 7, the head of US diplomacy, Antony Blinken, had affirmed that Hernández was included on July 1, 2021 in the list of people accused of corruption or undermining democracy in El Salvador, Guatemala and Honduras.

“The United States is promoting transparency and accountability in Central America by making public the visa restrictions against the former president of Honduras, Juan Orlando Hernández, due to corrupt acts”Blinken detailed. “No one is above the law,” he stressed.

Hernández, who left the Honduran presidency on January 27 after eight years in office, has been implicated by New York prosecutors in links to drug trafficking. His brother, former deputy “Tony” Hernández, was sentenced in March 2021 to life in prison in the United States for the same crime.

It’s a statementBlinken noted that “according to multiple credible media reports,” Hernandez “has engaged in significant corruption by committing or facilitating acts of corruption and drug trafficking, and by using the proceeds of illicit activities for political campaigns.”

“Furthermore, Hernández was identified by name in the testimony of a witness under affidavit in a federal criminal proceeding in the United States for having received profits from drug trafficking as part of the financing of his campaign,” he added.

US prosecutors have referred to the former president as a “co-conspirator”, although there was no formal accusation against him.

Former President Hernández denies all charges and claims that the accusations are revenge driven by the same drug lords that his government captured or extradited to the United States.

He argued that between 2014 and 2021, 28 capos were extradited and another 31 were handed over to the United States, while 41,240 kg of cocaine were seized, among other achievements in his fight against drug trafficking.

After handing over power to Xiomara Castro, the first woman president of Honduras, Hernández was sworn in as a deputy of the Central American Parliament (Parlacen), a benefit that all former presidents of the region have access to upon leaving office, which grants her the right to immunity and trial.

Hernández “enjoys protection as a deputy of the Central American Parliament,” said his lawyer.

Shortly before leaving office, JOH, as he is known by his initials, unexpectedly traveled to Nicaragua to sign a maritime boundary treaty with the ruler Daniel Ortega, a situation that raised suspicions about the possibility of using that territory to escape justice. .

“Hernández has had meetings with Ortega, and Ortega has already given refuge to two former presidents of El Salvador, and Nicaragua does not have an extradition treaty with the United States (…) Being in Nicaragua, the American justice is not going to be able to catch him”said to the CNN Mike Vigil, former Director of International Operations for the US Drug Enforcement Agency (DEA).

Chronicle of a betrayal: how former president Juan Orlando Hernández took the business from a Honduran drug clan to keep it for himself

The US withdrew the visa and prohibited the entry of Juan Orlando Hernández, the former president of Honduras