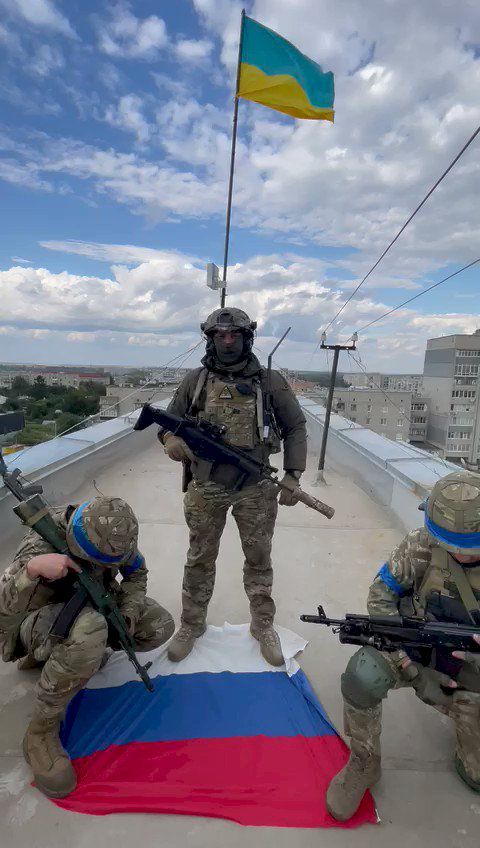 The video captured by a drone shows dozens of Russian vehicles fleeing in columns towards the border. They are trucks belonging to Vladimir Putin’s forces They began to withdraw from the city of Izyum and are seeking to leave the country on the left bank of the Oskol River.

The images, released by Nextaprove the effectiveness and speed of the Ukrainian counteroffensive which, according to President Volodymyr Zelensky himself, has already regained control of 3,000 square kilometers that were under the control of Kremlin soldiers.

The kyiv troops are advancing and have already begun to wrest control of the cities and towns around Izium from Moscow.in the key region of Kharkiv.

“Our forces entered Kupiansk. The liberation of settlements in the Kupiansk and Izium districts of the Kharkiv region is ongoing,” the Ukrainian military said on Sunday, 200 days after the start of the Russian invasion.

In its counteroffensive against the Russian troops, the army of kyiv claims to have recovered at least 30 towns in the region.

Since the beginning of September, more than 3,000 km2 have returned under Ukrainian control,” General Valeri Zaluzhny, commander-in-chief of the Ukrainian army, said in a statement. “In and around Kharkiv we have started to advance not only to the south and east, but also to the north,” he added.

The recovered sites are important logistics nodes, on which Russia depends to supply its troops. on the front in eastern Ukraine.

According to analysts, his capture by Ukrainian troops it is a blow to Moscow’s ambitions in the Kharkiv area.

The counteroffensive in the east came in parallel to an offensive in the south that had been in the works for months, around the regional capital of Kherson. Russia was forced to redeploy troops to bolster its defenses in this area, leaving its remaining forces in the east more spread out and facilitating the Ukrainian advance. Vladimir Putin’s forces suffer from the syndrome of the short blanket, as soon as they neglect one flank, they attack them from another. They don’t have enough men to conquer and occupy at the same time.

This progress on the eastern front comes on top of a slower and more limited advance to the south around Kherson and marks a substantial shift in the balance of forces on the front before the harsh winter hits the region.

According to the Washington-based Institute for the Study of War (ISW), Ukrainian forces penetrated at some points to a depth “of 70 km”, and in five days took “more territory than was conquered by the Russians in all its operations since April.

“We will expel the occupiers from every city and every village in Ukraine,” the Ukrainian president deliberately congratulated himself.

In the areas recaptured by kyiv, AFP journalists saw on Saturday charred Russian trucks and armored vehicles, some of them with the letter Zthe symbol of the invasion of Ukraine that began on February 24.

Ukrainian soldiers patrolled in Balakliya, where their flag flew. Around this city you could also see damaged or destroyed buildings.