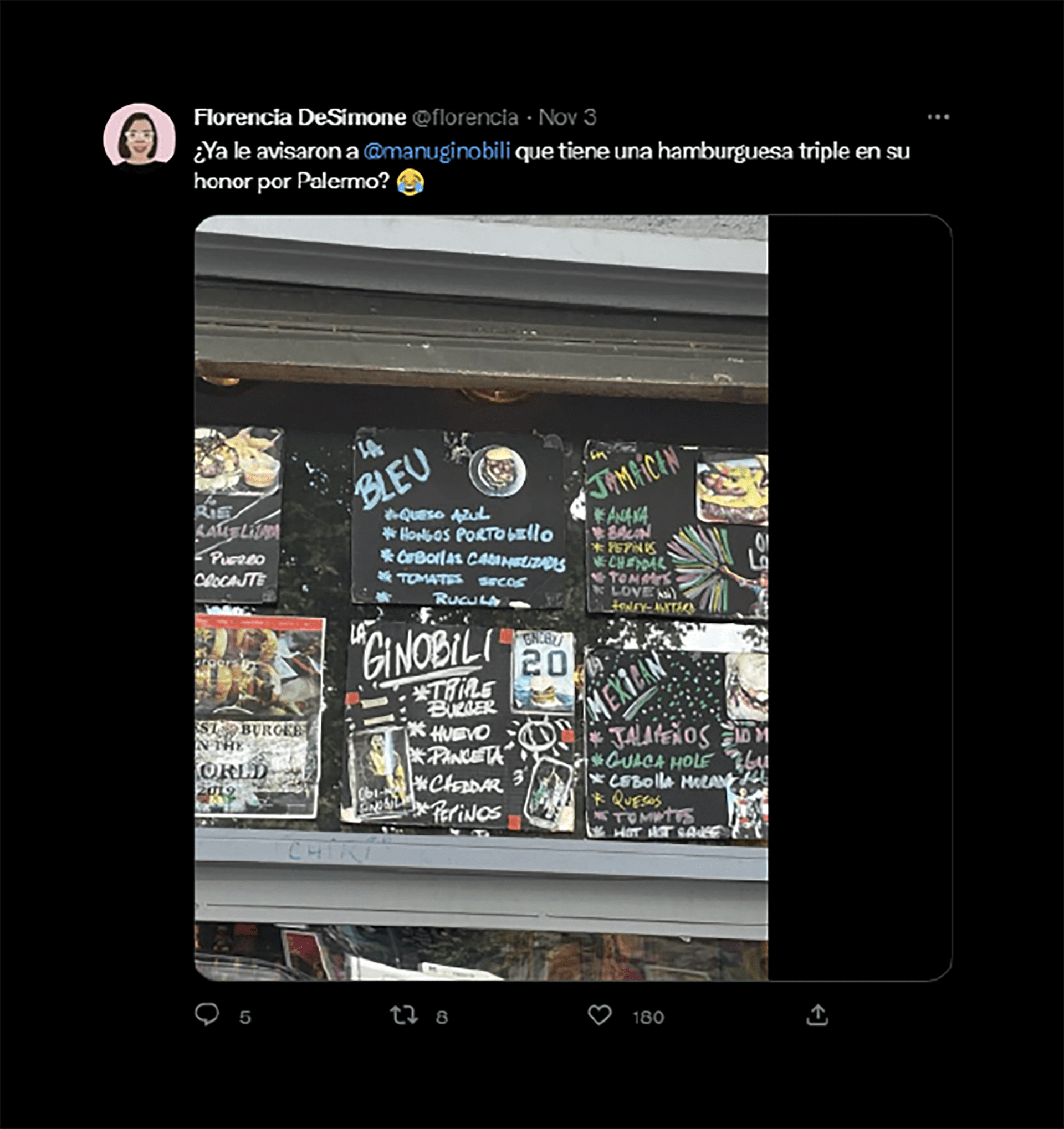 Manu Ginobili He has received numerous tributes throughout his life for his brilliant career. Among those achievements, the Bahian was the first Argentine to enter the mythical Basketball Hall of Fame, but surely he would never have imagined that his name would be on the menu of a restaurant in Buenos Aires.

A gastronomic establishment located in the Buenos Aires neighborhood of Palermo honored the Olympic champion and baptized “The Ginobili” to one of their burgers. The sandwich has triple beef, cheddar cheese, bacon, egg and cucumbers. This last ingredient was the one of discord and the one that had to leave the scene since the Manu “he lowered his thumb” from the United States.

As was? The user of Twitter Florencia DeSimone (@florencia) published the photo of the restó menu with the burger dedicated to the four-time NBA champion with San Antonio Spurs and mentioned the former player. “Has @manuginobili been told that he has a hamburger in his honor in Palermo?” she wrote. The surprising thing is that the one born in Bahía Blanca responded and made a special request: “I like the one above (because of another)… do you tell her? I don’t like cucumber.

“I’m going to show them your answer so they can change it,” the woman replied and days later she updated her status: “My work is already done,” answering another publication that confirmed that the owners of the bar took the cucumber from “The Ginobili”.

The publication went viral on social networks and other users commented that it is not the only hamburger dedicated to the basketball idol in Buenos Aires. For example, in the neighborhood of San Telmo there is the “Manu triple” which has three beef medallions interspersed with cheddar cheese, bacon, and caramelized onions.

There is also another in his honor in Ramos Mejía called “Cheesenobili” that has a double medallion of 110 grams, emmental cheese, pickled eggplant, provolone, chimichurri mayonnaise and french fries. Which one will Manu like the most?

The NBA redemption: the documentary that the United States put together to tell how he got up from the knockout blows that Argentina gave him

Manu Ginóbili’s full speech on his induction into the Hall of Fame: the tears when talking about his father and the tender message to his children