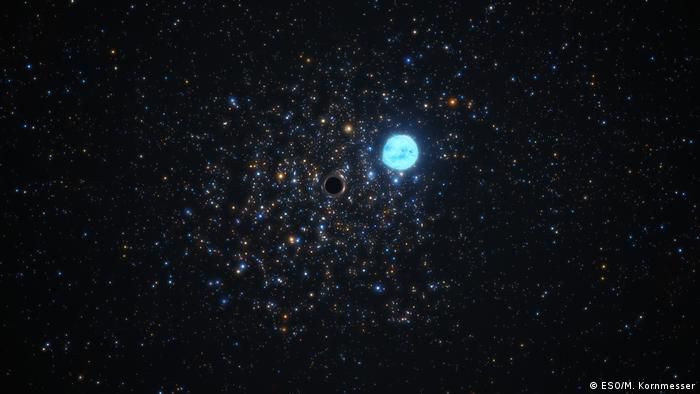 An international team of astronomers has just discovered a black hole in a star cluster outside our galaxy, using the Very Large Telescope (VLT) of the European Southern Observatory (THAT) to observe how the black hole affects the motion of a nearby star. This detection method makes its debut in the world of technology, and aims to be the key to finding hidden black holes both in the Milky Way and in other nearby galaxies.

As explained in an article published by ESO itself and which will soon appear in the ‘Monthly Notice of the Royal Astronomical Society’, The new black hole was located in a cluster of thousands of stars called NGC 1850, located about 160,000 light-years away in the Large Magellanic Cloud, the largest of the Milky Way’s “satellite galaxies”.

“We observe each and every one of the stars within that cluster and, like Sherlock Holmes following the missteps of a criminal gang with his magnifying glass, we try to find some evidence of the presence of black holes, although without seeing them directly. The result we show would represent only one of the wanted ‘criminals’, but when you have found one, you are well on your way to discovering many others in different clusters ”, Sara Saracino mentioned, research leader and member of the John Moores University Astrophysical Research Institute in Liverpool (UK).

Other “criminals” have already been observed in the galaxy

This first “criminal” it turned out to be a black hole of about 11 solar masses. And the definitive clue that allowed its detection was its gravitational influence on the orbiting star with five solar masses. Black holes of similar size have already been detected in other galaxies thanks to the glow they emit in X-rays when they engulf matter, or the gravitational waves they generate when they collide with another black hole or a neutron star.

However, not all stellar-mass black holes collide or emit X-rays, as Stefan Dreizler, another member of the team, explains: “The presence of the vast majority of them can only be dynamically revealed when a hole forms a system with a star, it will affect the movement of the star in a subtle but detectable way, so with sophisticated tools we can find them.

For this reason, the new method used by Saracino and his co-workers will allow astronomers to find many more black holes that until now were not detectable. The discovery made in NGC 1850 is therefore the first detection of a black hole in a young male star cluster (the cluster is only about 100 million years old)

When compared to older and larger black holes located in older clusters, the astronomical community has been able to understand how these objects develop by feeding on stars or merging with other black holes, and tracking the demographics of black holes in stars. Clusters improve our understanding of the origin of gravitational wave sources.

The “criminal” discovered had a particular movement

To carry out the research, the team used data collected over two years with the MUSE (Multi Unit Spectroscopic Explorer) instrument, installed at ESO’s VLT in the Atacama desert in Chile.

MUSE has made it possible to observe high traffic areas, like the most remote areas in star clusters, capturing information on thousands of stars in a single shot, 10 times more than any other instrument.

This is how the team detected the particular motion of the star, which was heading straight for the existing black hole.

NASA postpones landing of man on the Moon until 2025