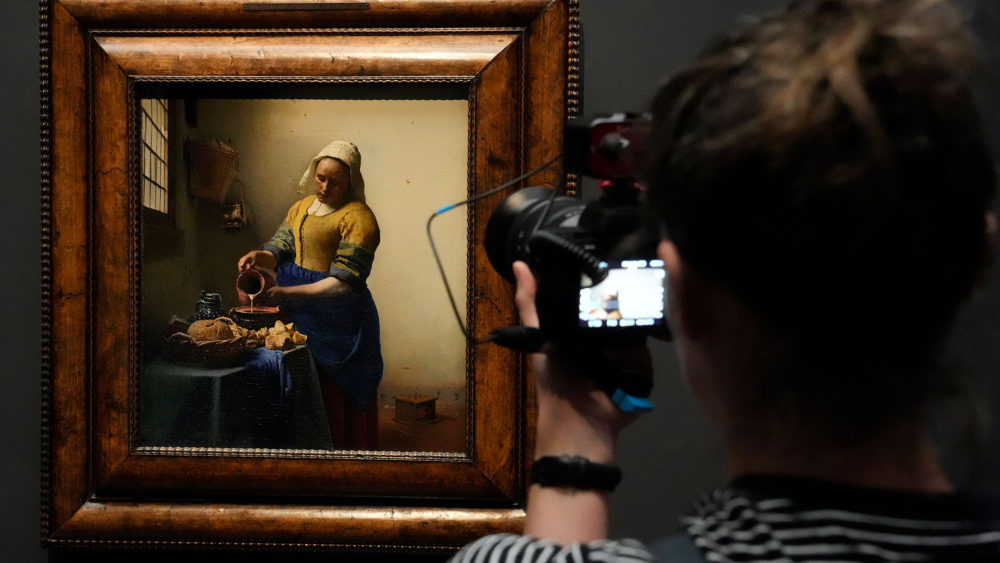 Experts discovered a jug holder and basket hidden in the famous 17th-century Dutch master Johannes Vermeer’s painting The Milkmaid, which he later painted over, Amsterdam’s Rijksmuseum announced on Thursday.

The “surprising” discoveries in the more than 350-year-old work shed new light on the elusive artist’s methods, ahead of the largest ever exhibition of his work, scheduled for 2023 at that museum.

“This reveals an unexpected new Vermeer. It’s amazing,” said Gregor Weber, director of Fine Arts at the Rijksmuseum, at a press conference.

These changes mean that the emblematic figure of the milkmaid, seen in the painting pouring a fillet of milk from a terracotta jug, “looms before us in a much more monumental way,” he noted.

The researchers knew, thanks to X-rays taken a dozen years ago, that there were hidden objects under the layers of paint on “The Milkmaid”, without knowing which ones.

too loaded
One of the most important finds is that the artist had sketched on the wall, just behind the milkmaid’s head, a wooden jug stand.

It had been thought that it might have been a fireplace. But a new technique, called “short-wave infrared reflectance,” clearly showed the details of the jars and the wooden stand.

Commonly used for industrial inspections and military purposes, the technique produces “false color” images that show the sketch in blue, when it was actually done with black paint.

The museum used similar methods to uncover the creative process behind Rembrandt’s The Night Watch and Vermeer’s Girl with a Pearl Earring, a painter of whom no drawing or study remains.

“What we discovered with The Milkmaid is that, at first, there wasn’t a very pretty white wall behind it. No, there was a shelf hanging with jugs,” Taco Dibbits, director of the Rijksmuseum, told AFP.

After reflecting, Vermeer thought: “It’s too loaded a composition, I’m going to paint it,” says Dibbits.

Less is more
The experts made another key discovery. A previously seen shaded outline can now be thought of as a ‘basket’, woven from willow, used at the time to air clothes.

Investigators also found a thick line of “hastily applied” black paint under the milkmaid’s left arm, showing that Vermeer had apparently made a quick initial sketch.

All objects and details were painted by the artist in his quest for perfection.

The jug holder was replaced with a bright white wall, while the basket became a much smaller foot warmer.

According to experts, the changes he made will be crucial for his later works, painted with simple blocks of color and a play of light and shadow. As for example his emblematic painting “The girl with a pearl”, which will also be part of the exhibition.

“He learned that less is more,” says Weber. The exhibition -scheduled from February 10 to June 4, 2023- will bring together 27 of the 35 works by the painter, from museums around the world.

Little is known about Vermeer (1632-1675), who lived a modest life in the historic city of Delft, during the Dutch “golden age” of painting.

“It will be the first and last time that the public will be able to see 27 Vermeers together,” Dibbits stresses.