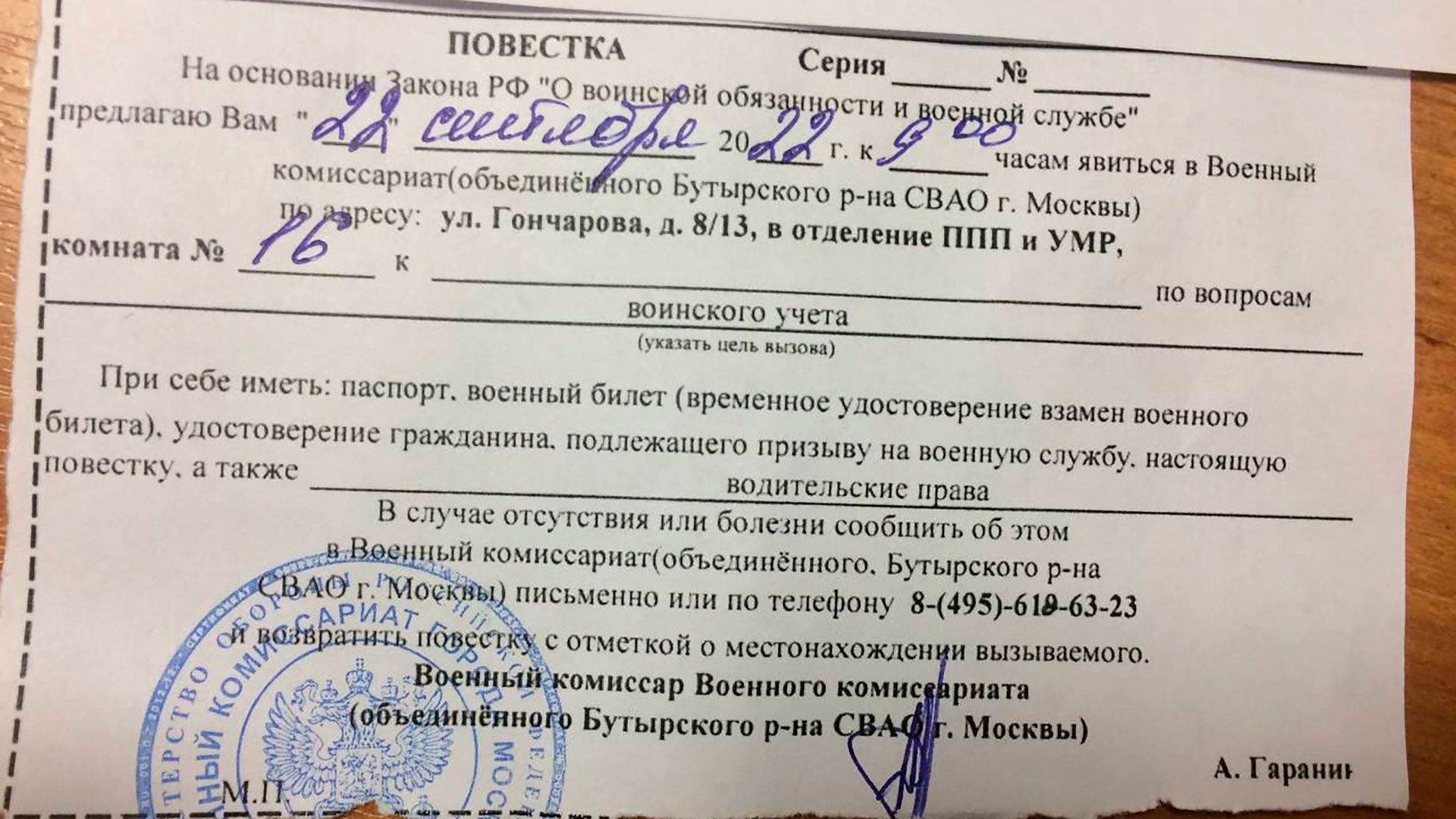 After Vladimir Putin’s announcement that Russia will call up hundreds of thousands of reservists to try to stop the Ukrainian counter-offensive in Donbas, massive protests took place across the country that ended with at least 1,300 detainees.

Now, the Kremlin seeks to punish those protesters and has started sending some of them summons papers to join the army.

According to the NGO OVD, which put the number of detainees at 1,453, “some of the detainees had their phones taken from them. There are isolated cases of preventive arrests using the facial recognition system in the subway. Information was received from four police departments that detainees were served with a summons to the military registration and enlistment office. At the Falcon Mountain Police Department, one of the detainees was threatened with criminal prosecution and a ten-year sentence for refusing to receive a citation.”

Along the same lines, the media reported Nexta: “People detained at anti-war rallies in Russia receive call-up papers. Some are dropped off at the police departments to be taken directly to the military police station in the morning.”

More than a thousand people have been arrested today in Russia in the protest called by a peace movement against the partial mobilization decreed this Wednesday by Russian President Vladimir Putin to face the defeats suffered on the battlefield in Ukraine.

“At 18:36 GMT there were already more than 1,113 people detained in 38 cities,” said the independent organization OVD-Info, which tracks arrests and has been declared a foreign agent in Russia.

The Moscow Prosecutor’s Office warned that organization and participation in illegal actions will be punished with up to 15 years in prison.

Disseminating calls to participate in illegal actions or to carry out other illegal acts on social networks will also be punished administratively or criminally.

Calling minors to participate in illegal acts will also be punished.

In the capital there were at least 409 detainees and in Saint Petersburg at least 444, according to the same source.

In the center of Moscow, where there were hundreds of protesters on Arbat Street, the arrests by riot police began as soon as the protest started, as the EFE agency was able to verify.

Those gathered shouted “no to war” to applause and “Putin to the trench.”

A demonstrator with a protest sign was immediately arrested by the agents and taken away.

Others chanted “the police are the shame of Russia.”

“Why are you doing this if tomorrow you are going to be sent to the war in Ukraine?” Some addressed the agents.

Among the chants you could also hear “life for our children”, in reference to the declarations of the head of the Defense Committee of the Duma or Chamber of Deputies, Andrei Kartapolov, that the first mobilized will be reserve non-commissioned officers under 35 years of age and officers under 45 years of age.

The citizens tried to create human chains to avoid arrests, while the police created cordons to prevent the passage of the protesters, who intend to go down Arbat Street until they reach the Ministry of Foreign Affairs.

Shortly after, law enforcement began to clear the area and push protesters towards the beginning of the pedestrian street.