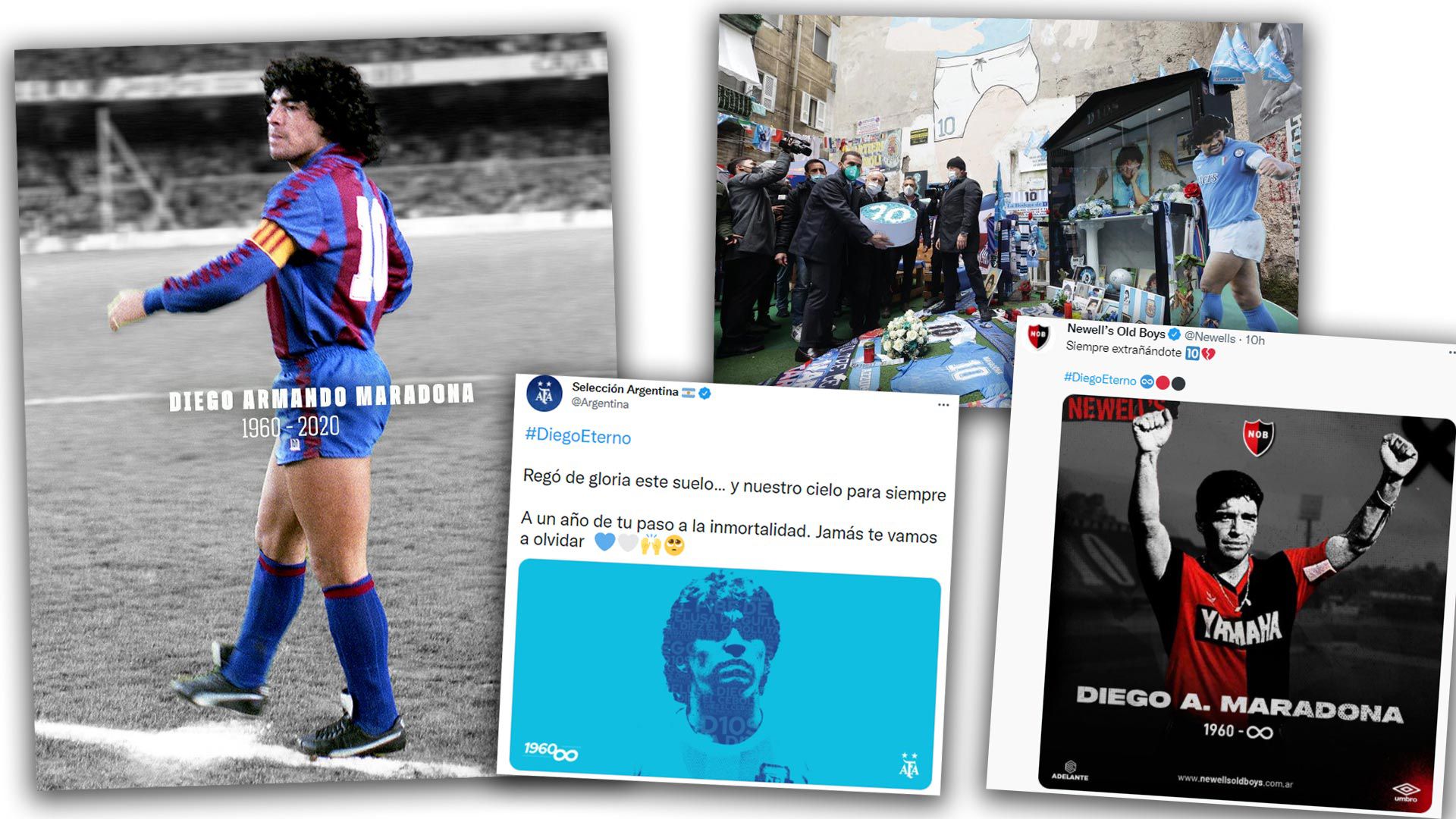 In all corners of the planet, during this Thursday, November 25, thoughts will unite in a single person: Diego Armando Maradona. Soccer lovers, Pelusa fans, devotees of its magic revealed the feelings that are born from their pores on a date as special as this. A year after the loss of the greatest player of all time, the star received physical tributes and through social networks. As if to get excited throughout the day …

The Argentine Professional League recalled an old video of Diego playing games with a ping pong ball during the 1994 World Cup in the United States and challenged a footballer from each of the First Division teams to imitate him. On Naples, if there are any Maradonian city, they discovered a bronze monument and filled an altar in his honor with offerings. Giuseppe Bruscolotti, former defender azzurri, he climbed to the height of the new discovered monument and placed a captain’s ribbon on it.

Aurelio de Laurentiis, president of the Italian institution, declared: “This (the San Paolo stadium that today bears Diego’s name) is the Olympus. What was Olympus? The house of the gods. For those who could see it, it represents a myth. Those under 35, who have heard of him heroically, is a legend. There is only one Diego, there will be no other ”.

Napoli prepares a great party in the run-up to Sunday’s Serie A match against Lazio. They will discover another statue that has Diego’s hand and footprint and there will also be a laser show with which they will revive Diego in a 3D version. Members of FIFA, former teammates, members of the Boca Juniors international consulates and other special guests will be present.

Boca, Argentinos Juniors, Newell’s and Gimnasia La Plata They also dedicated a space to Ten, like Independent. And even official associations such as Conmebol and FIFA They did not miss the opportunity to entertain him. “What Diego has done for football, so that all of us fall in love with the beautiful game, is unique. He is, just like him, simply immense ”, declared at the time the president of FIFA Gianni Infantino.

Even Messi, in the last hours, shared his anguish at the one year anniversary of his loss: “The truth is that the feeling is strange, it’s like not believing. Always thinking that at some point you will see it on TV, in an interview or giving your opinion about something. A long time passed and it seems that it was yesterday when it happened ”.

THE VIDEO OF THE PROFESSIONAL LEAGUE

THE VIDEOS OF NAPOLI FOR MARADONA

THE VIDEO OF ARGENTINOS JUNIORS

THE VIDEO OF THE CONMEBOL

Letter to Diego, the absent friend who let himself die (Cherquis Bialo)