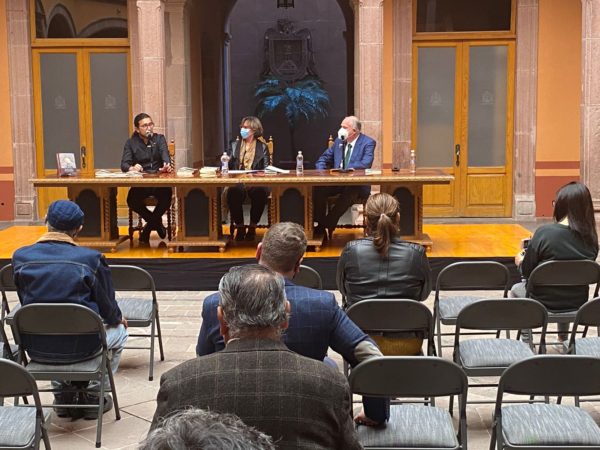 The Autonomous University of San Luis Potosí (UASLP), through the Directorate of Editorial Development and Publications, presented the Montejano and Aguiñaga Collection at the “Caja Real” Cultural Center, made up of the books: Hidden Treasures of Old San Luis; From the old San Luis traditions, legends and events; and The theaters in the city of San Luis Potosí.

The presentation of the Montejano y Aguiñaga Collection was in charge of Lic. Gerardo García Rojas Flores, director of the Teatro de la Paz, theater promoter and lecturer on the history of Mexican cinema, Dr. Gerardo Vela de la Rosa, specialist in history of the alcohol culture in San Luis Potosí, especially pulque, promoter of the collective

El Cariño de un Tlacuache and author of several book chapters on this subject; and Patricia Flores Blavier, director of Fomento Editorial y Publicaciones. Since 1917, the UASLP has published seven books, two published electronically and four about to conclude their publishing process in the coming months.

This editorial work is a way of recognizing the legacy of Rafael Montejano y Aguiñaga, since his presence in the culture and history of San Luis Potosí is resounding and undeniable. His work continues to be the indispensable reference source for researchers in the social sciences and humanities in this region of the country.

It should be reiterated that, at different times, the Autonomous University of San Luis Potosí has ​​been the publishing house of the books of the teacher, historian, chronicler, thinker, scholar of the state of San Luis Potosí, bibliophile and priest, Rafael Montejano y Aguiñaga.

In the presentation of the works, it was highlighted that Father Montejano also has many characteristics and attributes, among which is being a great guide for a significant number of people who have done research on regions and times in San Luis Potosí. He was a member of the Mexican Academy of History and the Mexican Academy of Language.

Consulted both in Mexico and abroad, Montejano’s contributions to local and regional history have largely made it possible to reach aspects of what is known as potosinity. Texts that allow knowing the origin of data and aspects that most of the time go unnoticed by many historians or researchers.

The Directorate of Editorial Development and Publications, reiterated the invitation to society in general to consult the Montejano y Aguiñaga Collection: The Theaters in the city of San Luis Potosí, which provides a historical account of furniture, settings, spaces from the seventeenth century to the XIX century; Hidden treasures of old San Luis, a work that rescues stories, characters, events and traditions, and the fundamental work, Of old San Luis Traditions, legends and events, available at the University Library