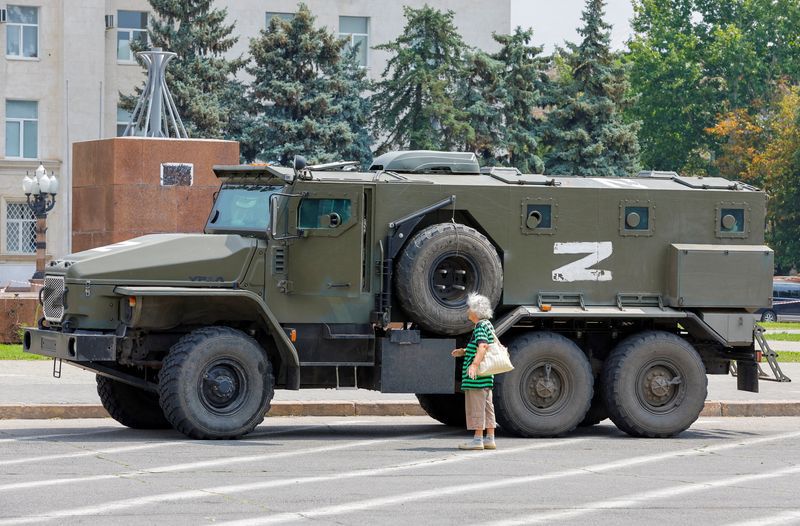 Ukraine on Monday accused Russian troops of looting empty houses in the southern city of Kherson and occupying them in civilian clothes to prepare for street fighting in what both sides predict will be one of the biggest battles of the war.

Russia in recent days ordered civilians to leave Kherson in anticipation of a Ukrainian attack to take back the citythe only regional capital Moscow has occupied since its invasion in February.

Kherson, with a population of nearly 300,000 before the war, has been left cold and dark after the electricity and water were cut off in the surrounding area over the past 48 hours, both sides said.

Russian-installed officials blamed Ukrainian “sabotage” and said they were working to restore power. Local authorities, meanwhile, said the Russians had dismantled 1.5 kilometers of power lines and power would likely not return until Ukrainian forces recapture the area.

kyiv called the evacuation from the area a forced deportation, a war crime. Moscow instead says it is sending residents away for safety.

The city sits on the only stretch of territory controlled by Russia on the western bank of the Dnieper River, which divides Ukraine. Retrieving it has been the main focus of the Ukrainian counteroffensive in the southwhich accelerated from the beginning of October.

The situation inside Kherson could not be independently confirmed. Ukrainian forces on the near front told the agency Reuters in the last days they expect a hard fight with the Russian troops, who cannot control the city but are determined to exact a price in blood before being expelled.

“While Kherson residents are being forcibly deported from their homes, speaking of ‘evacuation,’ Russian military and FSB officers are doing what they love most: robbing their homes,” the Ukrainian presidential adviser tweeted. Mikhailo Podoliak on Monday. “Theft of those they came to ‘protect’: the best illustration of the ‘Russian world’”.

Amid rising tension, Russia has sent thousands of troops to reinforce the Kherson area, but has hinted in recent days that it may withdraw. The deputy head of the administration installed by Russia, Kirill Stremousovsaid last week that Russia is likely to withdraw across the river, though there was silence from his superiors in Moscow.

Russia lost all the territory it captured in northern Ukraine in the weeks after the invasion, and has faced major setbacks in recent months in the areas it still holds in the east and south. President Vladimir Putin has responded to the defeats by calling up hundreds of thousands of reservists and announcing the annexation of the occupied territory.

However, as more and more troops are sent to the front lines and casualties mount with little sign of further progress, concern is growing within Russia about the conduct of the war.

The Russian Defense Ministry on Monday took the unusual step of denying that an elite unit suffered catastrophic losses in a senseless assault, after Russian military bloggers published an open letter from surviving members of the 155th Marine Brigade. the Pacific Fleet.

In the letter, addressed to Oleg Kozhemyakogovernor of the unit’s Pacific Coast base home region, the soldiers said that in just four days their unit had lost 300 men killed, wounded or missing, and half their equipment.

They blamed generals looking for medals and bonuses: “They spit on everyone just to show off,” the letter about commanders said. “They call people meat.”

In a video message, Kozhemyako acknowledged the letter but said he exaggerated the losses: “We contacted the commanders. Yes, there are casualties, there is heavy fighting, but they are far from what is written in this appeal,” said the governor.

The Russian Defense Ministry said: “Due to the competent actions of the unit commanders,” only 1% of the Marines were killed and 7% wounded in the operation, many of whom had already returned to duty. .

Separately, in the biggest restructuring of Ukraine’s economy since the war began, authorities in kyiv on Monday announced the state takeover of Ukraine’s largest oil producer and refiner, and engineering firms that make trucks, electrical transformers and aircraft engines.

The authorities presented it as an emergency measure in times of war. The companies are associated with billionaires once known to wield political power in kyiv, and the moves appear to be in line with President Volodimir Zelensky’s longstanding goal of reining in “oligarchs.”

With information from Reuters

The head of Putin’s mercenaries acknowledged that he interferes in foreign elections and threatened: “We will continue to do so”