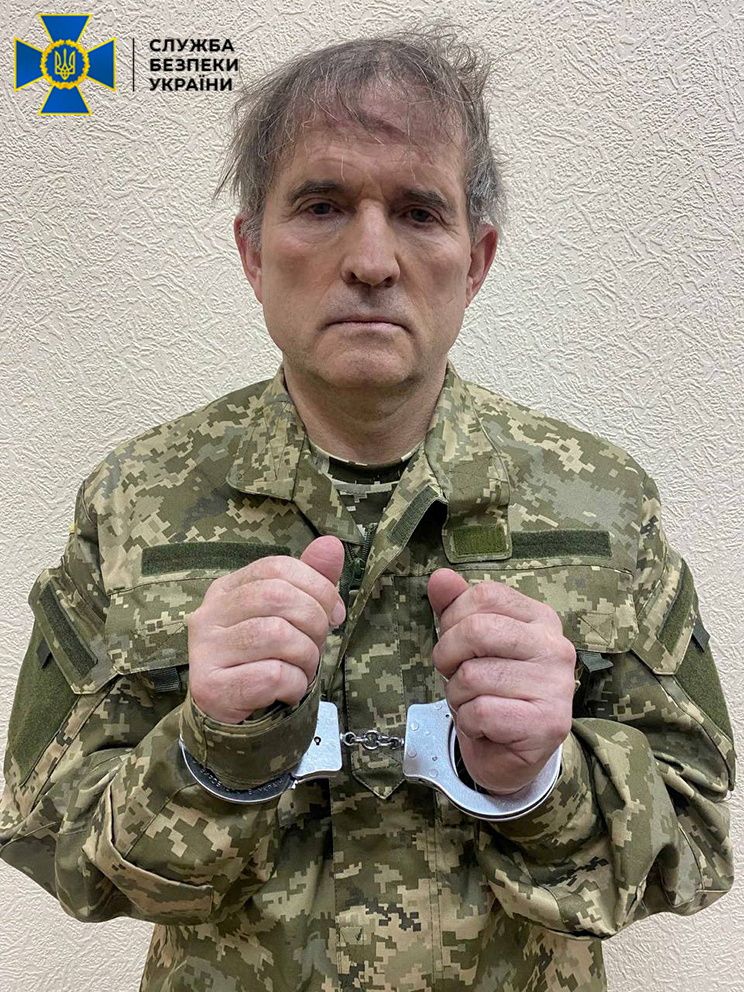 Ukraine exchanged the pro-Russian politician Viktor Medvechucdetained in kyiv months ago, by more than two hundred Ukrainian prisoners, including those he considers “heroes” of the Azov Regimentand ten other captives of other nationalities who were held by Russian soldiers.

The exchange of prisoners took place this Wednesday after months of negotiations between the two countries, due to the fact that last April the Medvedchukcompadre of the Russian president Vladimir Putin and then detained by the authorities of Kyivasked through a video to be exchanged for Ukrainian civilians and soldiers who resisted in Mariupol.

The President of Ukraine, Volodymyr Zelenskyhe stated: “We traded one fan from Russia for 200 warriors… It’s a good result.”

During the exchange carried out in the last few hours, Ukraine received 215 prisoners, including 124 Ukrainian officers, who were in the hands of the Russians, according to the head of the Office of the President, Andriy Yermakto the president Volodymyr Zelensky during a phone call with those released.

Among the released Ukrainian prisoners are 108 members of the “Azov” Regimentwhich resisted for more than eighty days in the steel mill Azovstal of Mariupolincluding its main commander, Denys Prokopenko“Redis”, and others considered Ukrainian heroes such as Yevheniy Bova Y Lev Pashko.

According to Zelensky, of the 215 released 188 are “heroes” of the Azovstal steelworks and of the Mariupol resistance itself.

“The defenders” Maryana Mamonova, Yana Shumovetska and Anastasiya Chernenka, who were captured while pregnant, were also released, according to the Ukrainian authorities.

Ten other prisoners of various nationalities held by the Russians were released and sent to Saudi Arabia on Wednesday, where they have been accompanied by the head of the State Property Fund, Rustem Umerov.

They are five citizens of Great Britain, two from the United States, one from Morocco, one from Sweden and one from Croatia.

“The enemy sentenced them to a long prison sentence or the death penalty. We save their lives. All of them will return home through the mediation of Saudi Arabia. I am sincerely grateful to everyone who contributed for their help!” he said. Zelensky in his late night speech.

According to information provided by the Ukrainian presidential website, the acting head of the Security Service of Ukraine, Vasyl Maliuk; the deputy head of the General Directorate of Intelligence, Dmytro Usovand the Human Rights Commissioner of the Verkhovna Rada, Dmytro Lubinets, met with the 200 freed Ukrainians.

“Today we directly exchanged 200 citizens of Ukraine for Mr. Medvedchuk. I would like to point out that Medvedchuk is not just a close friend of Putin, but a well-documented state traitor. The guilt of him is fully recorded in the relevant materials,” said Vasyl Maliuk.

Maliuk noted that during the investigative work on Viktor Medvedchuk’s cases “several subversive networks were neutralized, state traitors were detained, and a large amount of information was obtained, which is used in counterintelligence activities.”

Also, five more citizens were released in exchange for 55 Russian prisonersaccording to information from Ukraine.

Almost all of the released Ukrainians are already on Ukrainian territory, except for the five commanders of the Azov Regiment, who, according to previous agreements reached with the Turkish president Recep Tayyip ErdoganThey’re in Turkey “Under your personal guarantees of protection.”

“At first we were offered to return 50 of our people in exchange for one of those who were in the detention center of the Security Service of Ukraine. Talk later. We insist. The number increased from 50 to 200. They are already in Ukraine. I think this is a good result.” Zelensky in his speech.

In the opinion of the Ukrainian president, “it is not a pity to give Medvedchuk in exchange for true warriors.” “He went through all the investigative steps required by law,” he added. Ukraine received from him everything necessary to establish the truth within the framework of criminal proceedings.”

Zelensky revealed that the prisoner exchange operation carried out this Wednesday “it was prepared for a long time” and warned that there would even be more than 200 rescued Ukrainians because “among liberated Ukrainian women there are those who are preparing to become mothers”.

The pro-Russian politician and oligarch Victor Medvedchukarrested on April 12 by the Ukrainian security forces, has been considered for 20 years the main agent of influence of the Kremlin in Ukrainian politicsespecially in Donbas.

“I have known Putin since 2002, when I was head of the presidential administration. I am proud of our friendly relationship, ”he commented to the news agency Eph in an interview in 2019.

Medvedchuk67, is for many Ukrainians the “traitor” par excellence due to his close ties to Russia, to which must be added that in recent years he was one of the main enemies of President Volodimir Zelensky.

Medvedchuk is familiarly known as the “Putin’s buddy” and it is that the Russian leader was the godfather of one of his daughters, a ceremony that was held in Saint Petersburg.

As head of the Ukrainian Presidential Administration (2002-2004), he coordinated under-the-table cooperation between Moscow and kyiv, interrupted by the Orange Revolution, a setback for the Kremlin that had supported the election of pro-Russian Viktor Yanukovych.