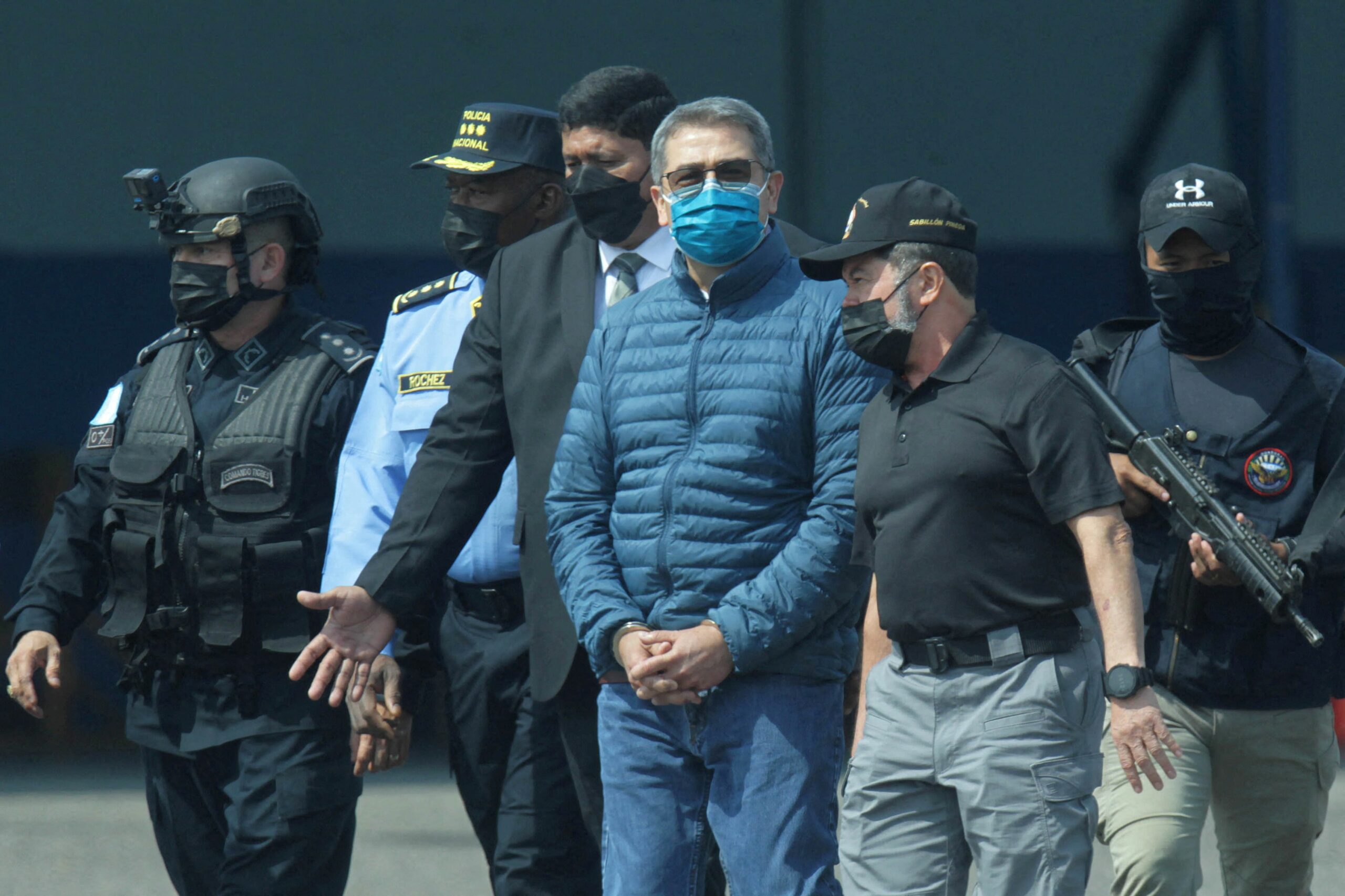 Not even a week passed since Juan Orlando Hernández was extradited and appeared before the New York court that will conduct his trial for drug trafficking for more revelations to emerge about his money, the criminal associations he made while he was president of Honduras and their conflictive relationship with the United States. One of the most relevant: JOH, as he is known in his country, says he has access to USD 3 million to pay an eventual bail even though all his property and financial assets are supposed to have been frozen in his country.

The formal accusation made by the Department of Justice and published on April 21 already attributes to Hernández criminal behavior that until now had only been in the mouth of witnesses who appeared in other cases of Honduran drug traffickers, such as that of Juan Antonio “Tony” Hernández, brother of the former president.

Damian Williams, United States federal prosecutor, filed the indictment against Hernández on January 27 in the Southern District of New York (SDNY) court, which later approved the request to extradite the former Honduran president to answer for various crimes. of drug trafficking, including the importation of 500,000 kilograms of cocaine. In that document, the United States summarizes its case against JOH.

For the first time. The United States directly accuses Hernández of having served, from the presidency of Honduras, the interests of the Sinaloa Cartel.

The accusation adds something that Washington had not said before and that now seems to agree with those who, from the political opposition, a sector of the investigative press and civil organizations had said ad nauseam: that Juan Orlando Hernández used drug trafficking funds to win the presidential elections in 2013 and then in 2017.

Hernandez, says the Justice Department indictment, “used drug funds to enrich himself, finance his political campaigns, and commit electoral fraud, in connection with the 2013 and 2017 presidential elections. In return, Hernández protected drug traffickers.”

Protection in exchange for silver

The accusation also includes as its own another that a witness had already made before a US court: that “El Chapo” gave Tony Hernández one million dollars for the 2013 presidential campaign, which took JOH from the presidency of Congress to that of the country.

as posted Infobae, in the run-up to the 2013 presidential election, two drug trafficking organizations dominated the routes of western Honduras, in the mountainous department of Copán. From El Espíritu, a small town a few kilometers from the border with Guatemala, the Valle Valle clan operated, and from the neighboring town of El Paraíso, the cocaine was moved by Alexander Ardón, then mayor of the place for the National Party, whose boss was Juan Orlando Hernandez.

As of late 2012, according to at least two police intelligence officials who have investigated these clans and have spoken with Infobae on condition of anonymity for security, Tony Hernández was already the link between his brother Juan Orlando and the two Copa groupsn. The Hernández family, originally from the neighboring department of Lempira, had started their drug trafficking business around those years, according to Honduran police investigations.

The Valle Valle and Ardón were, before Hernández’s first ascent to the presidency, those who controlled the passage of cocaine through the last stretch of the Honduran route, which is the exit to Guatemala. Most of the cocaine that moved in the early years of the last decade was from the Sinaloa Cartel. Little by little, the Hernández began to enter the business from their position of political power, as described by dozens of testimonies in judicial proceedings against Honduran drug traffickers in the United States.

In 2012, before the presidential elections the following year, Juan Orlando Hernández asked Mayor Ardón of El Paraíso not to run for re-election so as not to bring unwanted attention to the National Party, according to what Ardón himself told US agents. In addition, JOH asked Ardón for a contribution of 30 million lempiras (about US$125,000) for all the nationalist candidates in Copán. In return, the Hernandezes offered him protection when JOH became president.

The Department of Justice seems to be referring to this type of “protection” when it speaks of JOH built a narco-state in Honduras. In fact, the accusation against Hernández, for which he was extradited to New York, reads like a summary of all the data that US justice has collected over the last decade to put together the puzzle of drug trafficking in Honduras.

With the rise of Hernández and the National Party, which had come to power in 2010 after the previous year’s coup d’état led by President Porfirio “Pepe” Lobo, the large drug trafficking clans in Honduras, which until then had operated only in their fiefdoms, they began to weave a network of collaboration that opened up the entire cocaine corridor in the country.

The landing points in the east and north of the country were under the control of several groups, among which the strongest was the Los Cachiros clan. The transit points and some of the production points were dominated by others, such as the drug trafficker Geovanny Fuentes. The political power of the National Party, first in the hands of operators such as Fabio Lobo, son of President Pepe Lobo, and later with the Hernández, provided the necessary protection for the network to come together.

Washington, in this accusation, does not hesitate to call Honduras a narco-stateand in saying that it was Juan Orlando Hernández who led to that condition by allowing, among other things, “corruption in legitimate institutions of Honduras, including parts of the National Police, the army, the National Congress, and, while publicly doing Passing off as an ally of the United States, he and his co-conspirators contributed to Honduras becoming one of the most important transit points for cocaine in the world.”

Washington did not always think so. In 2017, Heide Fulton, the highest-ranking US diplomatic official in Tegucigalpa, the capital, was photographed next to a recently re-elected Juan Orlando Hernández despite the fact that the drug trafficking charges were increasingly loud and that the rest of the community International had not hesitated to point out several irregularities in that election, including the possibility of massive fraud.

Juan Orlando Hernández did not build his reign alone. Drug trafficking operators, from Geovanny Fuentes -who gave him access to a drug laboratory in the department of Cortés- to Chapo Guzmán, but also the network of political power that grew under his shadow and the army that he made the protagonist of public security and a kind of praetorian guard facilitated the rise of JOH. So did the administrations of Barack Obama and Donald Trump in the United States.

At first, when it began to formally accuse drug traffickers such as Fuentes, Ardón, Los Valle or Los Cachiros, the Department of Justice named as co-conspirators Honduran politicians, police and military who had favored the consolidation of the coca route in the country. When indicting Tony Hernández, the DOJ referred, among others, to the “co-conspirator 4″ as a politician who had favored drug traffickers. That man was Juan Orlando Hernández.

That was in 2018, but even before, in 2014, the United States Drug Enforcement Agency (DEA) had testimonies that the Hernández were fully involved in the cocaine business. They were given to him, among others, by Ramón Sabillón, then chief of the National Police and current security minister of Honduras. It was Miguel Arnulfo and Luis Valle Valle who explained to Sabillón the role of Tony Hernández and his brother Juan Orlando in business with Chapo Guzmán when the then chief of police captured them.

Starting in 2014, after the fall of Los Valle, the DEA and the FBI supported investigations in Honduras that ended with arrests and trials in the United States, in which the prosecuted drug traffickers began to testify about their operations. The role of President Hernández began to become evident.

Despite all the information that was already in the hands of US federal agencies, judges and prosecutors, Washington’s diplomatic apparatus, Obama’s first and Trump’s later, maintained their political support for Juan Orlando Hernández, to the point of agreeing to his irregular re-election in 2017, which today the United States says was achieved in part with money from the Sinaloa Cartel. .

It was not until January 2022, when Hernández had already left power, that the Justice Department presented its indictment. A week later, as confirmed to Infobae two US diplomatic sources, Vice President Kamala Harris personally delivered the accusation to Xiomara Castro, the new president of Honduras, whose swearing-in Harris attended on January 27. On February 16, the Honduran police arrested Hernández to begin the extradition process to the United States.

All the time that Hernández remained in power, building the narco-state to which the US prosecutor refers, it allowed him to strengthen his control over the entire state apparatus of his country, but, in the end, it did not shield him from extradition.. Yes, Hernández was able to use that power to, even in prison, transfer some of his assets through his wife, Ana Hernández, and secure part of his fortune.

For now, Hernández’s lawyers in New York have said that the former president will ask the judge hearing his case to allows him to pay bail of USD 3 million to prepare his defense in freedom, which has raised speculation in Honduras about the origin of that money. Lawyers have said it will be provided by New York’s Jewish communities.

In another blow, defense attorneys have said they will ask Chapo Guzmán to testify about his alleged relationship with Hernández. The truth is that the former strong man of Honduras, manager according to the United States of a narco-state in Central America, now has to defend himself against those who were previously his political allies.

Chronicle of a betrayal: how former president Juan Orlando Hernández took the business from a Honduran drug clan to keep it for himself