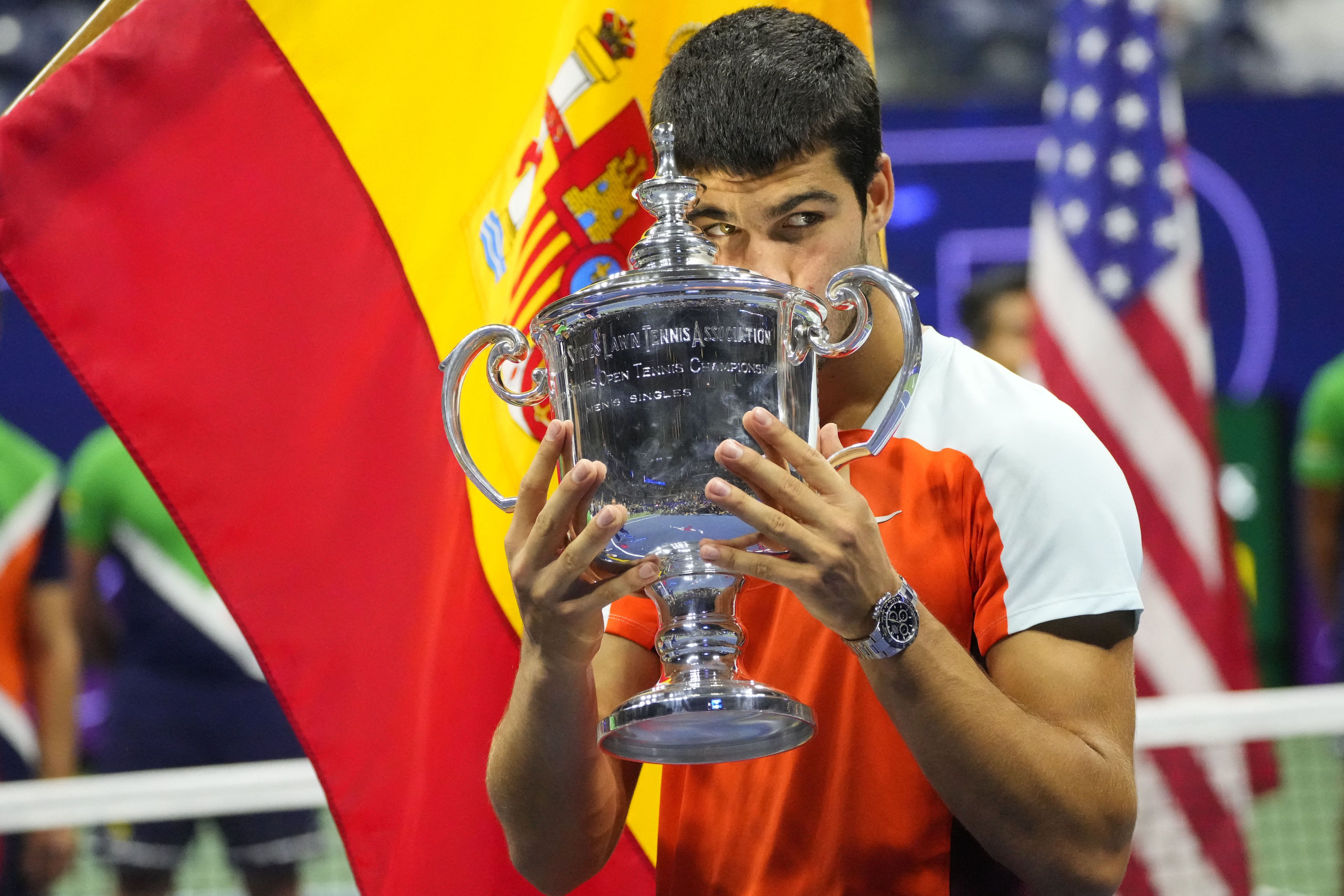 “He is a player who runs all the way, that is key, he is very agile and very skilful with his body. Technically, in terms of hitting, he is very complete, he goes forward very well and closes plays at the net very well. Maybe he doesn’t have the serve of a 2-meter guy, but I don’t see that he has cracks ”, the coach and former Davis Cup captain describes the young Murcian Gustavo Luzawhom he followed since he first had him in front of him at the 2019 Banana Bowl.

From being a promise, in almost the blink of an eye, Carlos Alcaraz became the new jewel of world tennis. And in the next few hours he will be No. 1 in the world. What made him such a risky player and where did this young man come from who, at only 19 years old, threatens the top of the professional ranking?

Born in El Palmar, Murcia, on May 5, 2003, at the age of 14 he entered the Academy that the former world No. 1 Juan Carlos Ferrero in the Alicante lands of Villena. Conducted by The mosquitoas Ferrero is nicknamed, has seduced not only the Spanish tennis scene, but both the circuit and the fans of this sport.

He does not stand out for his charisma or marketing skills, his qualities are on the side of conduct, work, his technical skills and his responsible attitude. As Nadal himself said two days ago, “Carlos has all the ingredients, the passion, the humility, the talent and the physique, which reminds me a lot of me when he was his age. He is already a rival in the present.”

In the 2021 season, he broke into the circuit from 146th place in the ATP ranking, to be among the top 15, when the ranking appears updated next Monday. During the past year he began to show his talent that led him to win, at the age of 17, his first match in a Grand Slam tournament -he beat Van de Zandschulp at the Australian Open- and at just 18 years, 3 months and 25 days , after his victory in the first round of the US Open, he managed to close the circle with a victory in each of the Majors and improved the marks achieved by Nadal, Djokovic and Federer.

Five days later he became the youngest player to reach the quarterfinals in The Big Apple, in the Open Era (since 1968). At that moment the comparisons with the idol of him born in Manacor began to intensify. “It doesn’t seem bad to me that they compare him with Rafa”, said Tony Nadal. “Because although they are different players, they share the sacrifice of playing and the decision to win,” added the trainer of the greatest winner of Grand Slam titles.

But he did not hold back praise when describing the young star from Murcia: “Carlos is a very complete player with good technique. His game is modern, he tries to hit the ball hard and fast, with very aggressive tennis. If he continues to be so focused on his work, he has a hopeful future”.

On his way to being the best Under 21 on the ATP circuit in the season, in July he won his first crown in Umag, Croatia, on clay. And in the last contest of the year, the Next Gen that brought together the 8 best of 2021 under 21 years of age, managed to prevail over all of his generation. Among them, the Argentine Sebastian Baezof a promising present.

Sebastian Gutierrez, Báez’s coach, lived it up close and has his reading of why Alcaraz managed to get so high. “On a general level, what surprised me the most is his physical delivery, how he moves, how he slides, how he goes on top of the ball. Also, what he conveys on the court and that offensive identity all the time. He is a boy who accelerates when in doubt and has a great serve. So his weaknesses are not so noticeable, thanks to what he transmits, because when you are higher on the circuit, the holes are less visible and this boy has so much attitude, so much presence that, at times, he is intimidating, ”he described in detail Gutiérrez, to further understand the characteristics of this Spanish player.

For Juan Carlos Ferrero, who remembers receiving him at the age of 14, Alcaraz is a player with a lot of potential and “one of the few players I’ve seen who can adapt in a very short time to the level of any player you put in front of him”. A detail that his coach highlights, since it is very difficult for a player to be able to adapt his ball speed to that of his rival, and he adds among his considerations: “he is a very dynamic tennis player, who likes to play very aggressive. He feels very comfortable on all surfaces, he likes fast courts, because he finishes a lot at the net, but clay doesn’t bother him”.

As for the possibilities that predict a position in the Top Five and even some dare to place it in a short time at the top of the ranking, Ferrero’s prudence leads him to declare that he would not like to make a forecast of how far he can go. , but that “has the potential to play an ‘egg’ at tennis”.

So far in 2022, the Murcian reached seven finals and won five. He was crowned champion at the ATP in Rio de Janeiro, Barcelona and at the Masters 1000 in Madrid (brick dust). In addition, he already knew what it was like to beat the Norwegian Ruud in the definition of the M1000 in Miami.

“I think it’s going to be the best of all the new faces we’re seeing. Physically, he seems very fast to me and he has a lot of generosity in movement, which speaks of a player who is not only fast, but also has a great attitude to move”, commented Gustavo Luza, opening a comparison with tennis players under 25 years that today dominate the circuit.

Some of the considerations to take into account to evaluate a player is the commitment to his work, the respect for his coach and the hunger to achieve victories that bring titles and that they demand every week, every day. “I see him determined, very hungry, committed and focused, as I have not seen any of these young players. In addition, this boy’s relationship with his coach is one of great respect, very mature and understands very well who is in charge, even if he is later the one who executes on the field, ”Luza closes her analysis.