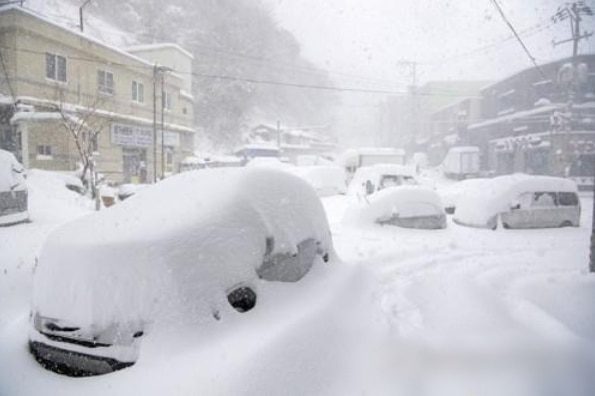 South Korea issued alerts for low temperatures that are registered in the country, due to the passage of a cold wave that crosses the region and that has left heavy snowfalls in the south of the territory, including in the tourist island of jeju.

The Asian country issues this type of alert when the morning minimum temperature falls below 15 degrees below zero for more than two consecutive days, as has happened, or when the temperature experiences a sudden drop that could cause potential damage.

in seoul, The mercury plummeted this Wednesday to 19.3 degrees below zero early in the day, with a wind chill minus 25.7according to data from the South Korean Meteorological Agency (KMA).

Since the year 2000, the morning temperature in the South Korean capital has dropped below 17 degrees Celsius for only nine days, in a sign of the severity of the winter cold front on the peninsula.

In mountainous areas of the Gangwon Province and in the northern province of gyeonggi the morning temperature was minus 25.1 degrees Celsius.

Snowfall and strong winds caused airlines to suspend all 466 scheduled domestic and 10 international flights to and from Jeju International Airport, according to aviation authorities.

The meteorological authorities expect the snowfall to continue throughout the day, and estimate rainfall of more than 10 centimeters in the shores of Gyeonggi province (west) and between 5 and 10 centimeters in mountainous areas of Jeju (south), where airport operations had returned to normal this morning.

Meanwhile, in Japan Some 280 flights were canceled during this Tuesday because of the largest wave of cold that the country has suffered in the last decade, which is leaving heavy snowfall in a large part of the territory and also causing disruptions in rail traffic and by road.

The cold air front that has crossed the Japanese archipelago since the day before has left heavy snowfall in areas of the center and west of the country, rainfall that is expected to continue for the next few hours, according to the Japan Meteorological Agencyn(JMA).

The meteorological phenomenon is causing minimum temperatures ranging from -12 degrees Celsius in Sapporo (north of the country) to -4 degrees in Tokyo and in other areas of the center and west of the archipelago, according to the JMA.

Heavy snowfall has caused the closure of sections of major highways that connect much of the north and west of the country, while high-speed rail services (“shinkansen”) have also been disrupted between Yamagata and Fukushima prefectures, according to the operating company. JR East.

Low temperatures and snowfall are expected to intensify until Thursday, with some areas of the country reaching their lowest temperatures in a decade, as well as the possibility of snow in big cities like Tokyo and Osaka.

The Japanese authorities have been warning that the cold could freeze water pipes and the surface of some roadsTherefore, they recommend that the population of the most affected areas avoid leaving their homes except in cases of extreme necessity.

The Hokuriku (center) region could see up to 90 centimeters of snow in the next 24 hours, while there can be up to 70 centimeters in large areas of eastern and central Japan and in the Kinki and Chugoku regions to the west.

In North Korea, likewise, minimum temperatures down to -30 degreesand the state media have recommended in recent days that the population take precautions in the face of extreme weather conditions.

For the first time, South Korea is considering developing its own nuclear weapons to counter the threat from Kim Jong-un