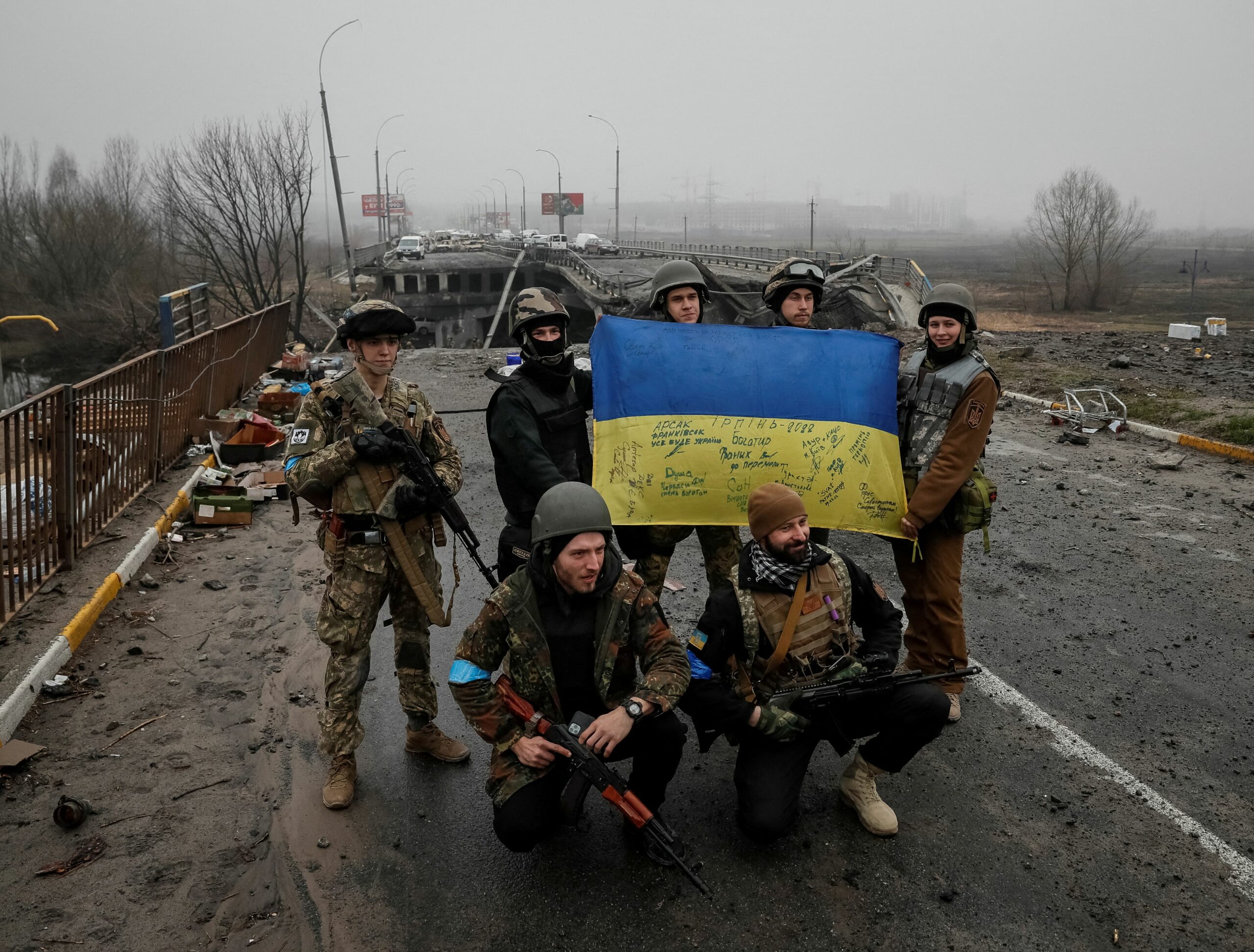 Irpin, a town north-west of Kyiv, it became the most important battlefield of this war. It was one of the first towns to be taken by Russian forces advancing from Belarus. Nearby is the strategic Hostomel airport, which was the primary target for Russian special troops to use as a beachhead in the capture of the Ukrainian capital. There is also one of the main escape routes for civilians fleeing the bombing in the metropolitan area. The image of hundreds of people sheltered under a destroyed bridge by the Ukrainian forces themselves to prevent the passage of Russian tanks. They waited to cross the Irpin River and continue westseeking refuge in Poland or further inside the European territory.

Now, five weeks later, Irpin is the symbol of the counteroffensive launched by the Ukrainian army who regained control of that and other towns in the area such as Makariv. They made a pincer movement and closed in on the Russian troops, leaving only one escape route, on the road to Chernobyl and the Belarusian border. They also took back Buchain the same area and to the east of the city, they advanced behind the Russian lines that, once again, were trapped in Brovary. Probably, in the next few hours we will learn that the Russians escaped north to regroup in the Belarusian rear.

The Ukrainians also advanced in other enclaves in the East. They took up the initiative in the city of Sumy and are already very close to the Russian border. In Kharkiv, Ukraine’s second largest city, which has been under constant bombardment for three weeks, the Ukrainians managed to put up new defenses and pushed the Kremlin soldiers into the separatist territory of Luhansksomething they had not managed to do in the previous eight years, during the Donbas War, after the Russian invasion of Crimea and the enclaves in 2014. Another important front where the Ukrainians advanced is in the south, in Mykolayiv, very close to Kherson which is the only large city controlled by the Russians. There they retook the city and reinstated the mayor deposed by the Russians. To this we must add that Ukraine seems to have made a successful air raid into enemy territory. Two helicopters flying very low to avoid being detected by radar They attacked with missiles the fuel depots of the Russian city of Belgorod, 45 kilometers from the border between the two countries. This was confirmed by the Russian governor of the region, Vyacheslav Glsdkov. A video uploaded to the VKontakte site shows the ships launching the missiles. The New York Times determined its authenticity and described that two helicopters can be seen firing at the refinery, although his identification was not distinguished. The Ukrainian foreign minister said that could not “confirm or deny” the veracity of the fact “for reasons of military security.”

Most of the military analysts consulted by CNN and the BBC are convinced that it was a risky and very well executed Ukrainian offensive. And this is a serious blow to the Russian generals who claimed last week that the Ukrainian air force was “virtually destroyed”. Given this success, it is likely that the coming days will see more attacks on strategic targets inside Russian territory. Intensify as reinforcements of American and British weapons arrive.

“They thought they were going to take Kyiv in a matter of hours. But they made a serious mistake by not calculating our ability to mobilize rapid action forces and they ended up withdrawing with significant casualties of soldiers and weapons”, assured Colonel General Oleksandr Syrsky, the head of the defenses of the Ukrainian capital to a group of correspondents who witnessed the release of Irpin.

Of course, what Syrsky now has under his control nothing resembles the bucolic cereal producing town from before the Russian invasion. Most of the infrastructure is unusable, 80% of the houses and municipal buildings damaged, there are no cattle in sight and the few women who remained in the place during the Russian occupation speak of terrible atrocities. The central street is littered with Russian war junk: tanks, missile launchers, troop transport trucks. Twisted and burned irons. Jeremy Bowen, the legendary BBC war correspondent, counted thirteen bodies lying in a block of that same street, ten of them civilians. The Russians provoked a massacre before withdrawing.

“There are already some answers for a couple who was killed by the Russians and left to decompose on March 7. His rusty, shrapnel-riddled car lies on the road by one of the gas stations, reduced to a shell by fire. Next to him are the burned and twisted remains of the remains that are barely recognizable as those of a man. On the finger of the corpse there is still a wedding ring. Inside his car is what remains of a woman’s cremated body, with his mouth open in what looks like a scream”, Bowen recounted in his office.

The deaths of these people were filmed by a Ukrainian drone on March 7, operated by the Bugatti unit of Territorial Defense. The unit released the video, which was viewed millions of times on social media. It caused enormous outrage. It showed the cold-blooded murder of a man who had raised his arms in the classic gesture of surrender. The bodies are those of Maksim Iowenko and his wife Ksjena. They were in their car and were part of a convoy of 10 civilian vehicles trying to escape from the Russians.

The counterattacks emboldened Ukrainian fighters who knew how to exploit Russian vulnerabilities: poor logistics, poor supplies, lack of local knowledge and low morale. All of this is seen on the ground, where the unity between the vanguard and the supply chain is permanently severed and in the Russian recruits taken prisoner who they claim to have been deceived by their commanders. They assure that they were told that it was about military exercises and they did not know until the last moment that they were going to attack the neighboring country.

The propaganda launched from the Kremlin tells of a totally different situation. The Defense Ministry said yesterday that Russia was entering the “final phase” of operations after “achieving all major objectives” in the north of Ukraine. And that the troops will move out of kyiv to “liberate” the Donbas region, in the east of the country. Nothing of this is true.

Nor can this counteroffensive be read as an imminent Ukrainian military victory. Volodymyr Zelesnky’s government is a long way from achieving it. Russian forces are still superior by a range of 10 to 1. “There was no total Russian retreat on the ground,” the Institute for the Study of War explained in its analysis. “We are not seeing a change in trend, although there are areas where the Ukrainian forces are having some success. There is a long way to go before this is over.” Zelensky himself acknowledged this week: “The scale of the challenges has not diminished. The Russian army still has significant potential to continue attacks against the Ukrainian state.”

A principle of Russian military doctrine also emphasizes the idea of the “offensive defense” which is based on defeating the adversary buying time, conserving forces and using artillery and missiles to degrade the enemy. And that is exactly what is happening in most of the cities attacked by Kremlin forces. According to intelligence reports from Western agencies, in the next few hours about 10 new tactical groups of Russian battalions will arrive at the frontwhich usually have about 700 troops, with armor and artillery, bound for the Donbas front.

To keep up his counteroffensive, Ukraine will need a continuous flow of heavy weaponry. The West has supplied a number of weapons, most notably anti-tank missiles, but Zelensky has repeatedly called for tanks, planes and artillery systems to be sent. For now, the most effective weapon they provide you with is comprehensive information on the movement of Russian troops. It is picked up and dispatched by US reconnaissance planes that constantly fly over Ukrainian territory.

Ukraine could take advantage of this position of strength that it achieved in recent days through another type of counterattack: the diplomatic one. The talks of the parties with the mediation of Turkey continue in Istanbul. While there is enormous skepticism about the possibility of reaching a lasting agreement, the ukrainian delegation can at this moment become more assertive in countering russian claims to territory.

“It is a good time for Ukrainians to set the issues they want while the momentum is there and European unity and support still hold”, explained Sergio Jaramillo, the former Colombian official who designed the peace process with the FARC, and who is now an advisor to the European Institute of Peace in Brussels. “It is always better to negotiate when you are stronger and for the Ukrainians that may be now.”

But the advantage position of the Ukrainian forces collides with the walls of the Kremlin. Vladimir Putin wants to keep the Crimean peninsula for good, which it invaded and annexed in 2014, and the two provinces of the Donbas region. In Washington and Brussels they believe that Russia is simply playing for time with the Turkish-sponsored negotiations and that their objective is to occupy by blood and fire a very important portion or the totality of the Ukrainian territory before sitting down to really negotiate. The United States and Europe have already warned that only a complete ceasefire, withdrawal of troops and return of captured territory would trigger discussions on lifting sanctions to the Russian economy that are already causing serious dissent within the Kremlin.

Ukraine would have to defeat Russia on several fronts before getting any concessions from Putin. The counteroffensive is a very good first step.

The 6 weaknesses of the Russian Army