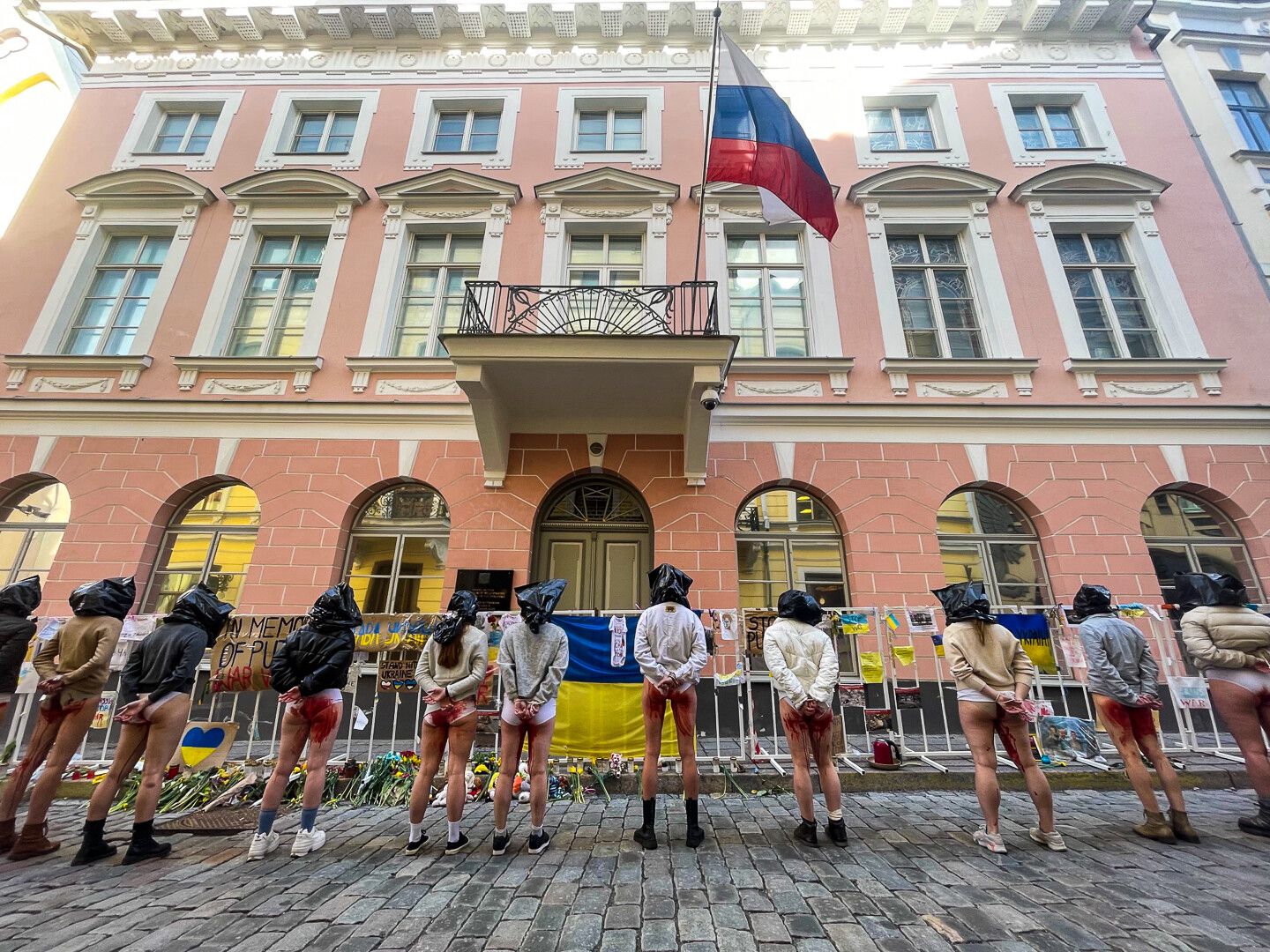 On March 13, a Russian soldier stormed a school in Malaya Rohan, a town near the Ukrainian city of Kharkiv, which had been under relentless bombardment for weeks by Vladimir Putin’s forces. Dozens of women and boys took refuge in the basement of the school.

The soldier reached the underground hall, threatened several times to shoot and ordered a 31-year-old woman to go up to the main floor of the building, locked her in a classroom and proceeded to repeatedly rape her. He forced her to perform oral sex on him and while she was doing it, he pointed a gun at her head or directly at her face. “On two occasions, he shot into the ceiling. She said it was to give me more motivation”, the woman told in her testimony before the Human Rights Watch (HRW) specialists. When she finished brutally attacking her, the soldier told the woman her name and that she was 20 years old. He also told her “you remind me of a girl I went to school with”. Before leaving, he grabbed a knife and cut off a lock of her hair. “To remember you”, he added.

As Russian troops withdrew from the outskirts of kyiv on April 1, official reports of sexual violence, which had trickled in during the first five weeks of the invasion, suddenly took the form of a systematic and coordinated campaign of sexual violence. Teenage girls and young women were the main target, but so were girls and boys as young as five or six years old and elderly women up to 80 years old. Little by little, similar stories of perversion and brutality began to spread in every town or city where the Russian troops passed. In the last week the complaints of women increased exponentially dared to recount the atrocities to which they were subjected.

It was also seen that the sexual attacks had an organization that far exceeded the possible individual actions of a soldier. The Ukrainian Ombudsman, Lyudmyla Denisova, reported that 25 teenage girls were held in a basement in the city of Bucha and gang raped. Nine of them are now pregnant. Dozens of bodies of naked women with their hands tied behind their backs were found in that area. Some had mutilated genitalia. There were also several male children in those conditions. To another group of women who were caught helping the defense, they were stripped naked, their heads shaved and tortured inserting weapons into their bodies.

“These sexual crimes… are a weapon of war to humiliate, subjugate, terrorize and force people to flee the territory,” says Marta Havryshko, a researcher at the University of Basel. “Russian soldiers are trying to send a signal to the entire community: we are the winners, you are weak, we will destroy you, so they had better give up the fight for independence.”

Rape was first recognized as a war crime in 1919.but many more wars passed before the first prosecution took place, it was against a Rwandan “warlord” in 1998. The first trial under the United Nations was for cases that occurred during the conflict in the former Yugoslavia, where Serbian forces maintained “rape camps” as “an instrument of terror.” Now, investigators from different specialized agencies are working in Ukraine collecting evidence to bring the guilty before an international court. “These allegations must be independently investigated to ensure justice and accountability,” Sima Bahous, executive director of UN Women, told the Security Council.

The history of the cruelty of human beings with their peers is as long as it is inconceivable. One would only have to think of slavery. Armies have always used rape as a weapon of war. In the 20th century these crimes began to be documented. The Imperial Japanese Army organized networks of sex slaves during the invasion of China. They did the same with the Koreans when they took over the peninsula. It also happened after the German army invaded Russia in June 1941, organized by the Einsatzgruppen (Special Action Group). The Russians responded with the same atrocity when they entered Berlin in 1945. In the next three years there were between 600,000 and two million rapes of German women who had survived the war. American soldiers at My Lai massacred men, women, and children in 1968 during the Vietnam War. And, obviously, the violations were not lacking. Systematic sexual abuse from all sides was documented in successive Balkan wars. In Bosnia (1992-95) there were between 20,000 and 60,000 rapes. In the Rwandan war (1990-94) there were between 250,000 and 500,000.

In the Iraqi prison of Abu Grahib in 2003, some of the jailers, men and women, they “had fun” they showed the prisoners hooded and connected to electrical cablestied up with straps, piled naked on the ground, and engaging in simulated sexual acts. ISIS caused a holocaust against the Yazidi minority in Iraq and sexually enslaved their women. Within the Islamic State that the terrorists raised between Syria and Iraq, women and girls were given as prizes to the combatants.

The brutal phenomenon has been studied in the last hundred years by some of the most prominent researchers. In his classic “The Creation of Dangerous Violent Criminals,” Professor Lonnie Athens explains that “violence” is analogous to “socialization”, that is, people become the kind of people they are as a result of social experiences. Some of them are “consistent and unforgettable”, “have a lasting impact”, leave “a permanent mark…regardless of your wishes”. These characteristics, the specialists agree, they are exacerbated when people belong to a group. Pack action ensues. If they don’t do it on their own, they are pushed by their peers. They do it not to be different, to belong.

Russian killers involved in the murder and rape of Ukraine’s Bucha pic.twitter.com/vLYbxnF42P

Historian Joshua Fogel explains in “The Nanjing Massacre in History” that the Japanese were taught that their imperial hierarchy was at the center of world morality and that the Japanese were superior to all other peoples. The same thing happened in the case of the Nazi soldiers. They were convinced that the “enemy” is not another human being but a “subhuman”. Therefore, raping the enemy’s women does not morally imply the same criminal establishment as within their own society.

Walter Zapotoczny explains in his comprehensive essay “Beyond Duty: The Reasons Some Soldiers Commit Atrocities” that there are four main factors/factors that lead to some of the most horrific cruelties in history: brutalization, belligerence, violent activities and virulence. The stages are sequential. “Each stage has to be fully experienced before the subject advances to the next, a process that can occur over a short period of time or over several years. That violence is a choice rather than a compulsion is taken for granted among the military and among the police”, Zapotoczny explained.

All these characterizations appear in the Russian forces according to the testimony of their own members. who were taken prisoner by the Ukrainians. They are very young recruits subjected to brutalization through violent military training. They come from areas far from large urban centers and isolated. They have little or no formal education. They were indoctrinated and they were told that they were going to fight for a higher cause against enemies of the Fatherland. They convinced them that they are facing Nazis who want to commit another genocide like in World War II and that They must fight to claim their ancestors who fought against the Germans. Women are his spoils of war.

The last stage, that of virulence, appears clearly in some cases like that of Karina, a 22-year-old girl from the now infamous town of Bucha, on the outskirts of Kyiv. She was raped for days, left naked and shot in the face. The brutality was such that the police refused to show the body to his parents. They delivered it to a closed drawer.

The desperate cry for help from women and children trapped in the tunnels of the Mariupol steel factory, besieged by Russian forces

Putin has one last cruelty in mind for Mariupol