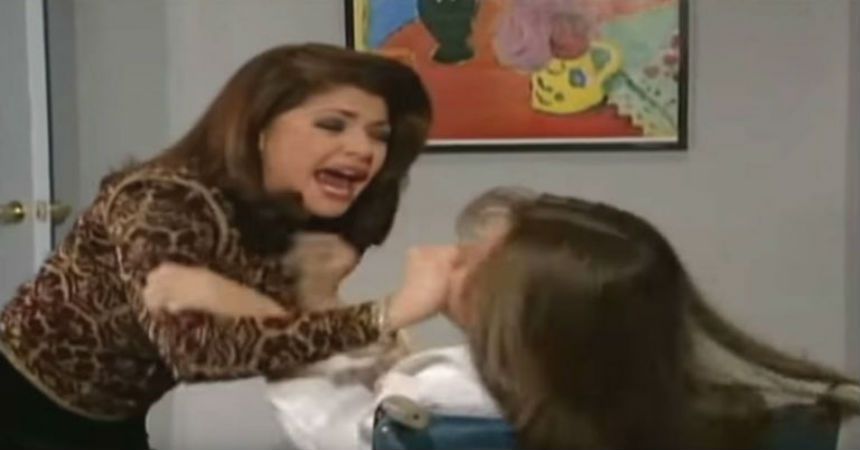 Itatí Cantoral became one of the most famous villains in Mexico thanks to her performance as Soraya Montenegro on Maria from the neighborhood, but Yulianna peniche was also a fundamental part in this character, since she played Alicia, the paralyzed girl who suffered his attacks.

Yulianna, 25 years after being part of one of the audience’s favorite melodramas, recalled some details about the novel and what she suffered as an actress when she was involved in scenes that included blows, such as the famous sequence in which Soraya finds Nandito kissing Alicia.

The actress revealed that she received strong blows on several occasions, but understands that it was due to the nature of the scenes. “He gave me my cates well given”He recalled after seeing the famous painting in At night with Yordi Rosado.

“You have to take care of your partner, but sometimes you get intense and there are real blows, but nothing happens because we are all professionals and, besides, I love Itatí. Always after an intense scene, because we had many like this, I mean, this was the best and the strongest, but she always said to myself: ‘My love, are you okay?’ to the cut, I always tried to take care of myself even if he hit me hard”, Peniche commented on the protagonist of The Mexican and the güero.

Although Yulianna expressed the love she feels for the singer, she recalled that in one of the many fights they had on stage, on one occasion opened her lip since she had an orthodontic treatment and Itatí had to hit her in the mouth.

“I don’t know if Itatí remembers, but in one scene, he accidentally broke my lips a bit because I had braces, so hit me with a keyHe had to teach me, accidentally it opened up to me and I was super professional, I didn’t cut the scene with everything and my lips felt swollen, and nothing happened ”, the actress recalled.

The story of Maria from the neighborhood aired between 1995 and 1996, but social networks have made sure that this mythical scene is not forgotten, nor its protagonists. Therefore, Peniche revealed that, although so many years have passed since it became the “Damn crippled”, on the street there are still those who yell at him with that nickname.

Now Peniche enjoys that this happens, because that way the soap opera will not be forgotten, but before, when the broadcast had just ended, it hurt to be recognized in that way and she hoped it would end.

In previous interviews, the member of Inseparable, love to the limit, He confessed that he suffered from various antics by his peers due to his role as Alicia in the melodrama. “When I was little, I was in high school when I did that soap opera; I entered high school and the whole school annoyed me. In good vibes and in bad vibes, they told me ‘look, there goes the bloody cripple’ “, he said.

However, the situation has changed because with social networks it is different since memes allowed the fame of Maria from the neighborhood He will pick it up again after more than two decades of being part of this melodrama.

Since then, Yulianna has continued in acting with novels such as Wild Heart or The force of Destiny, but now she feels excited to have entered the world of reality shows with his partner, José Luis Couple López, in Inseparable.