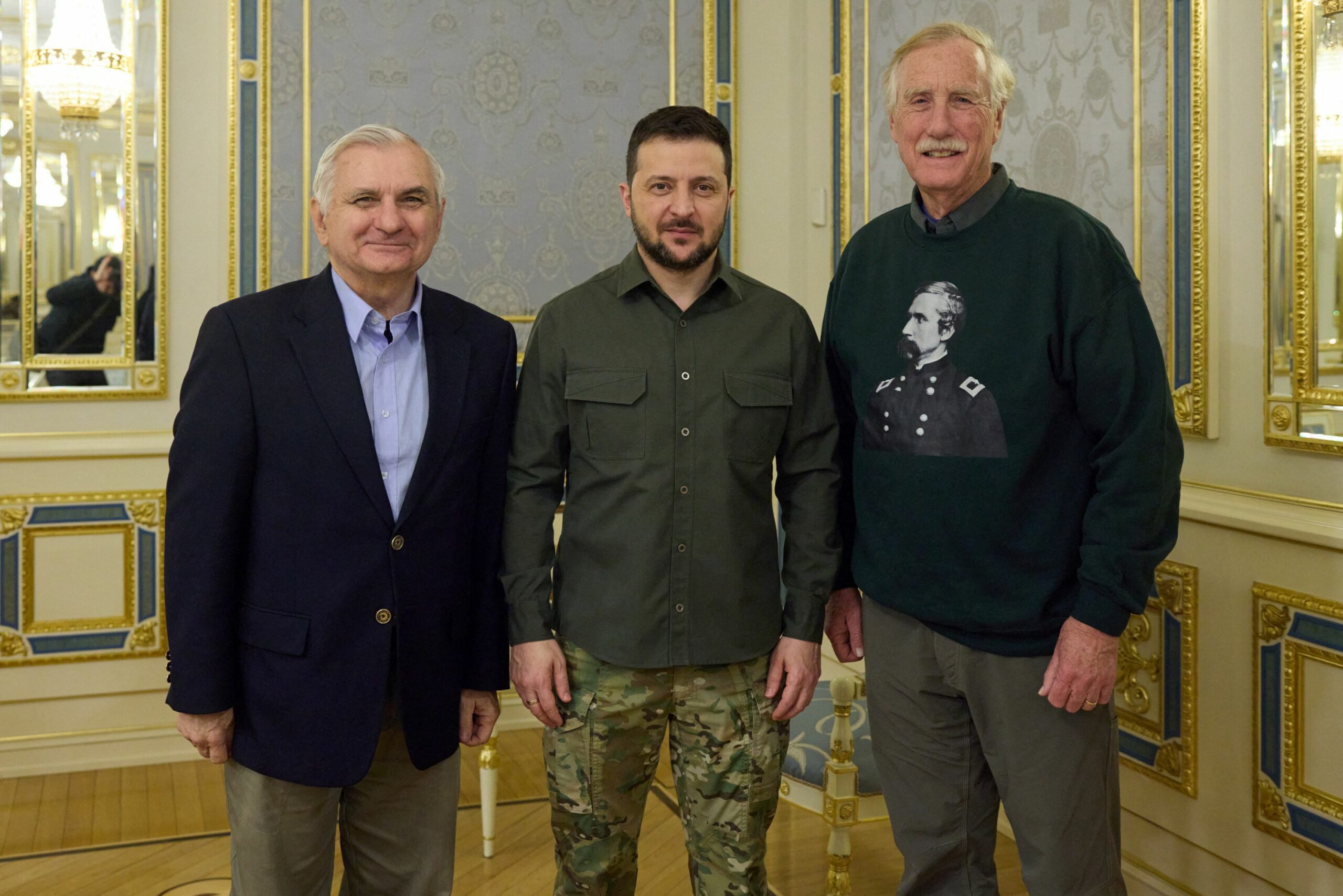 The President of Ukraine, Volodimir Zelenskymet this Friday in kyiv, the country’s capital, with several United States senators to address the situation in the front linewhere Ukrainian forces fight against the Russian Army.

“We have talked about the current situation on the front line and the danger of an increase in hostilities,” Zelensky said in his Telegram account before criticizing the Russian truce on the occasion of Orthodox Christmas, which he considers “a manipulation to hide their true military intentions.”

Zelensky, who has thus spoken with US senators Jack Reed (Rhode Island) and Angus King (Maine), has thanked the people of the United States for their support, the President, Joe Bidenand to Congress.

“We appreciate the help to our Army. We have really noticed. The United States is the leader in this very important issue and this brings victory ever closer”, he asserted before conveying the need for more assistance in the area of ​​air defense.

Likewise, he has indicated that it is “important to provide Ukraine not only with financing but also with help to overcome challenges, such as restoring the energy system.”

An eerie calm in kyiv on Friday was broken by air raid sirens which also reverberated throughout the rest of Ukraine despite Russia’s declaration of a ceasefire over Orthodox Christmas, a truce dismissed by Ukrainian officials as a ploy.

However, no explosions were heard in the capital. And reports of sporadic fighting in other parts of Ukraine were not confirmed. Clashes there could take hours to become public.

kyiv residents ventured into a light covering of snow to buy gifts, cakes and groceries for family Christmas Eve celebrations, hours after the ceasefire began.

The Russian President, Vladimir Putin, ordered his forces in Ukraine on Thursday to observe a 36 – hour unilateral ceasefire . Kyiv officials rejected the move, but did not say whether Ukrainian troops would do the same.

Moscow also did not say whether its forces would retaliate if Ukraine continued to fight, but Moscow-appointed Donetsk region head Denis Pushilin said it would.

Air raid sirens sounded in kyiv about 40 minutes after the Russian ceasefire went into effect. The application “Alerts in Ukraine”which includes information from the emergency services, showed sirens blaring across the country.

Russia’s Defense Ministry claimed that Ukrainian forces continued to shell their positions and said its forces returned fire to suppress the attacks. But it was not clear from the statement whether the attacks and return fire took place before or after the ceasefire took effect.

Ministry spokesman Igor Konashenkovreported multiple Ukrainian attacks in the eastern regions of Donetsk, Luhansk and Zaporizhzhia. It was not possible to verify the claims.

Putin’s announcement Thursday that Kremlin troops would stop fighting along the front line of more than 1,000 kilometers (680 miles) and elsewhere was unexpected. It came after the head of the Russian Orthodox Church, Patriarch Kirill, proposed a ceasefire for the Orthodox Christmas holidays. The Orthodox Church, which uses the Julian calendar, celebrates Christmas on January 7.

But Ukrainian and Western officials suspected an ulterior motive in Putin’s apparent goodwill gesture. They portrayed the ad as an attempt by Putin to take the moral lead while possibly seeking to wrest the initiative from the battlefield and rob the Ukrainians of momentum in the midst of their counter-offensive in recent months.

The Ukrainian president accused the Kremlin of planning to pause the fighting “in order to continue the war with renewed vigor.”

Now they want to use the Christmas as a cover to stop the advance of our guys in the (eastern) Donbas (region) for a while and bring equipment, ammunition and mobilized people closer to our positions,” Zelenskyy said Thursday night.

However, he did not say outright that kyiv would ignore Putin’s request.

US President Joe Biden echoed Zelensky’s caution, saying it was “interesting” that Putin was willing to bomb hospitals, day care centers and churches in recent weeks around Christmas and New Year.

(With information from AP and EP)

Ukraine denounced that Russia did not respect the ceasefire promoted by Putin: it attacked the city of Kramatorsk

The unilateral ceasefire announced by Putin in Ukraine began