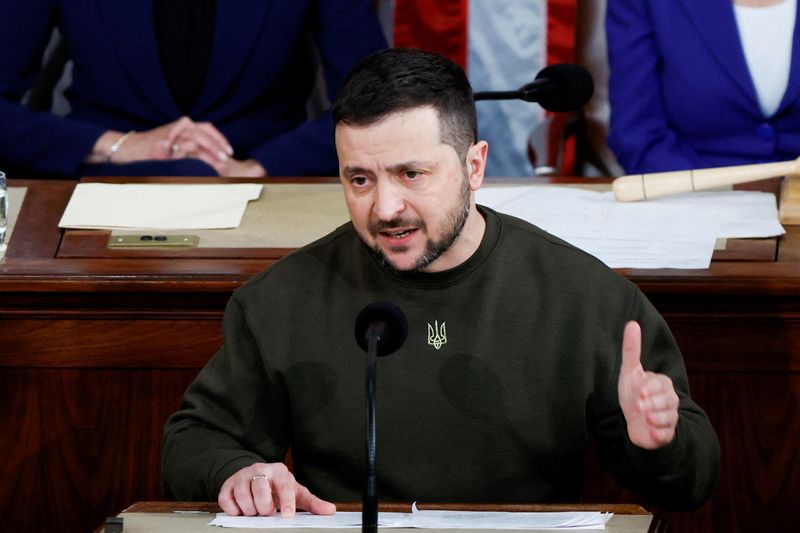 The President of Ukraine, Volodimir Zelenskyaccused this Thursday Vladimir Putinto use as military strategy the truce announced by the Kremlin on the occasion of the orthodox christmas.

“Those who continued the terror against our country and sent all those people of theirs to slaughter, refusing our offers to stop the russian aggressionthey certainly do not value life and definitely they do not seek peace”, Zelensky declared during his evening address to the Ukrainians.

Now they want to use the Christmas as a cover to stop, at least briefly, the advance of our men in the Donbas and bring equipment, ammunition and mobilized men closer to our positions”, he indicated.

The Ukrainian president pointed out that “everyone knows how the Kremlin takes advantage of the war breaks to continue with renewed impetus”.

He reiterated that the war will end when its soldiers leave the country or when the Ukrainian troops “throw them out”, since “people are tortured, electrocuted, raped (…) every day while his soldiers are on Ukrainian soil”.

Zelensky addressed Russian citizens and told them that the Ukrainian peace proposals “seem” that “have not been heard by the leaders of their country”.

He stressed that on November 15 – when the number of Russian soldiers killed rose to 82,000 – kyiv proposed the troop withdrawal of Ukrainian territory, as a “guaranteed and reliable measure of ceasing fire, casualties and war.”

Subsequently, on December 12, Zelensky sent a peace formula Putin to withdraw the troops on the day of Christmas: “Already that day, the number of dead Russian soldiers was almost 95,000,” he stressed, while confirming that today almost 110,000 military of the russian troops They have died in the war.

The Ukrainian leader assured that “Russia will not be able to quietly hide its preparations for a new wave of aggression against Ukraine and all of Europe”, warning that the details of an escalation “will be known to the world”.

“What is needed is for the citizens of Russia find the courage to break free of your embarrassing fear a man in the Kremlin, at least for 36 hours, at least on Christmas”, he ironized in reference to the conditions of the Moscow ceasefire.

Putin ordered hours before that a 36 hour ceasefire on the occasion of the orthodox christmasafter the patriarch Kirillmaximum representative of this Church, so requested.

“Taking into account the request of Patriarch Kirill, I urge the Defense Minister, Sergey Shoiguto implement a ceasefire on the entire front line on January 6 starting at 12:00 (local time),” the Kremlin said in a statement.

Thus, Putin would have stipulated that the truce remain in force until 00:00 on January the 8thnoting that the measure has been taken “taking into account the large number of citizens who profess the orthodox religion and who live in combat zones.”

“We call on the Ukrainian authorities to declare a ceasefire and allow them to attend the celebrations on the occasion of Christmas,” which according to Orthodox tradition falls on January 7.

Erdogan asked Putin to declare a unilateral ceasefire in Ukraine